On this day, one thousand years ago, Sweyn Forkbeard was proclaimed King of England, and while he reigned unopposed, his reign was to be short.

Very short in fact, yet it put in place the pieces that lead to the vastly better known King Cnut the Great to rule England shortly afterwards.

I say 1,000 years ago — all that is known is that it is highly likely that he was proclaimed King on Christmas Day in 1013. Of course, Christmas Day was on a different date back then, and even the year might be doubted.

But pah to the pedants — it’s a thousand years ago today, so far as it really matters! 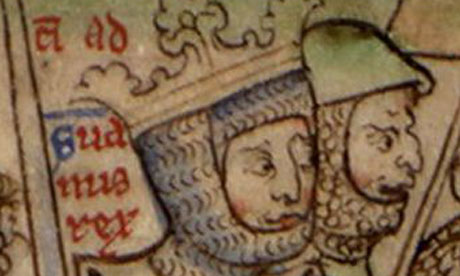 Sweyn I Forkbeard, King of Denmark and Norway raided England on several occasions, but his main attack took place in August 1013. Upon arrival in Anglia, his army headed northwards and subdued Northumbria and the Five Boroughs of the Danelaw (Derby, Leicester, Lincoln, Nottingham and Stamford).

He then headed down to London, but was repelled by the city, and the incumbent King Æthelred the Unready who it turned out was very ready (in fact, Unready means poorly advised, not ill prepared).

Retreating, he swiftly subdued the west of the country, and now effectively surrounded, London swiftly decided that resistance might be a bad idea, and surrendered.

King Æthelred escaped to the Isle of Wight, and sent his sons Edward and Alfred to Normandy, where he later joined them.

On Christmas Day 1013, the Witenagemot — an early council of Anglo-Saxon nobles — declared him Sweyn to be King.

It was to be a short-lived reign though, as he dropped dead, of apparently natural causes just five weeks later, on the 3rd February 1014.

Although his elder son, Harald II was named as his successor, the Danish fleet in England declared its preference for the younger son, Cnut.

The English councillors spying a chance to oust the lot of them sent for Æthelred again, who drove Cnut out of the country. But it was a temporary respite, as Cnut returned in 1016 and defeated the English — allegedly by digging a huge canal through South London — and his line ruled the country for the next 26 years.

While having your Christmas lunch, raise a Loyal Toast to the King who was crowned a thousand years ago today.