Go on board a sailing ship in St Katherine Dock

Posted on 9 December 2012 by Posted in Events and Tours

If you are a French organisation trying to promote onions to the British, you could hire some men to cycle around with onions on their boris bikes, but that would be a bit too obvious.

Better is to hire a replica ship based on the sort of vessel that Nelson would have known, sail it up the Thames and let people on board to have a look around. 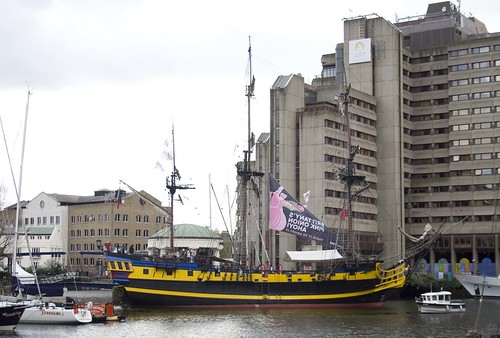 The Etoile du Roy is a replica of a privateer vessel built in 1996 originally as the Grand Turk, which was seized by the British Royal Navy in 1746. The 47-metre long vessel has three masts, contains 310 barrels and, when armed with its 20 cannons, would have needed 240 crew members.

The ship, now owned by French cruise company Etoile Marine, has been turned into a sailing museum.

On board, sailing ropes create the superficial walls of a maze to direct you around the ship, and eventually past the onion seller at the end.

Although the upper deck has all the usual sailing ship attachments, it’s the interior that is the most interesting, from the captains bed (a double!) and the officers dining room at the rear, so far so ordinary. However, a narrow corridor is lined with commemorative shields, and displays of antique weapons – slight incongruously next to safety equipment. 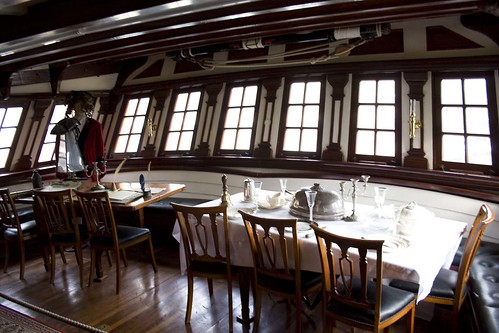 It was difficult to be sure what things did as all the signs are in French which I struggled a bit with – but it isn’t a serious loss. The signs seemed to suit most of the visitors when I was on board, most of whom seemed to be French themselves.

The sailors spoke a decent enough English though. 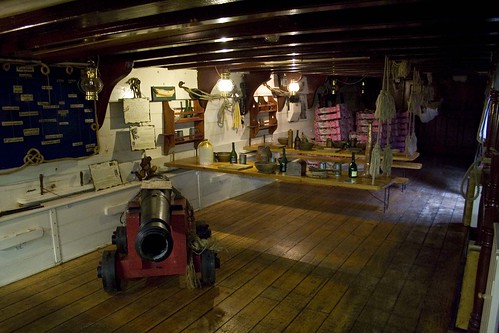 The rope maze directs you eventually down into the hold of the ship, which is where originally the crew would have slept amongst the cannons and stores. A decent display of artefacts, and a pirates shop at the rear to delight the kids (with rich parents).

For a ship promoting onions, it wasn’t surprising to see the cargo hold piled up with them. 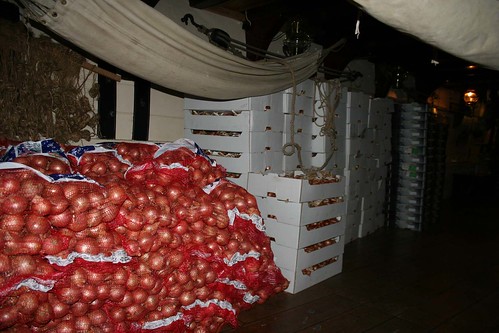 The ship is moored in St Katherine Dock and is open to the public until 16 December and is free to visit, unless of course you want to buy some onions.

The ship itself is famous for appearing in the TV series, Hornblower, and as HMS Victory during a fleet review on the 200th anniversary of the Battle of Trafalgar. 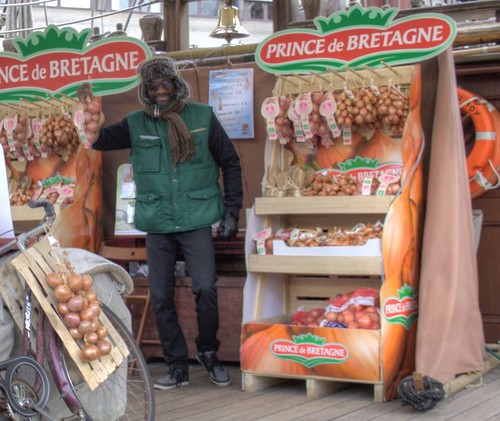 If you pay a visit, do notice the 2001 monolith on the wall next door to it.