The tale of London’s attempt to build an “Eiffel Tower”

One hundred years ago, a huge explosion was heard in Wembley, Nth London – by the site of the modern day soccer stadium. It wasn’t an accident though, but a the final death throws of an ill-fated attempt to give London its very own “Eiffel Tower”.

A bit of history then. The Chairman of London’s Metropolitan Railway, Sir Edward Watkin MP proposed the building of a huge tower at Wembley to rival that of the Eiffel Tower and would have been over 1200 feet tall some 300 feet taller than the Paris version. He even tried to get Gustave Eiffel to design his version – although the Frenchman declined the offer.

His motivation was not solely national pride, as the railway company was expanding its network into the lightly populated North London, and he felt the tower would become a landmark and tourist attraction, attracting not just day trippers on his railway, but also making it easier to sell housing on the land the company owned in the area.

Work on the new tower began in 1891 in a park, but when the park opened in 1894 the tower had reached a height of only 47 metres (155 feet), due to unstable foundations. By the end of the year – the money for the tower had run out, and it was left there, like an unstable stump for the next decade until it was demolished so that the metal could be reused for the war effort. The tower did open to the public though, as they put an observation platform at the top and there were cafes and shops at the foot of the tower. In a way, it did become sort of a tourist attraction, if not in the way that the founder had expected.

In 1907, the concrete foundations were finally demolished in a controlled explosion so that the land could be reused. Part of the foundation survived though, and was uncovered during the recent redevelopment of the Wembley Stadium. To give you an idea of the scale of the foundations – they lie directly underneath most of the football pitch.

Due to its incomplete status, the part built tower became known as Watkins Folly. 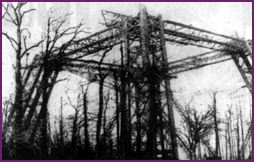