V for Vendetta – Live in Westminster

Published 5 November 2009 by By Ian Mansfield Events and Tours, Politics

If you had been in Westminster today, you might have seen a group of distinctive looking people striding purposefully down Whitehall to Downing Street.

Today, on the 5th November, is the day that political blogger, the Old Holborn takes a casual wander down Whitehall in the guise of V, from the film to present a Carson Rose to the police at the gates of 10 Downing Street. 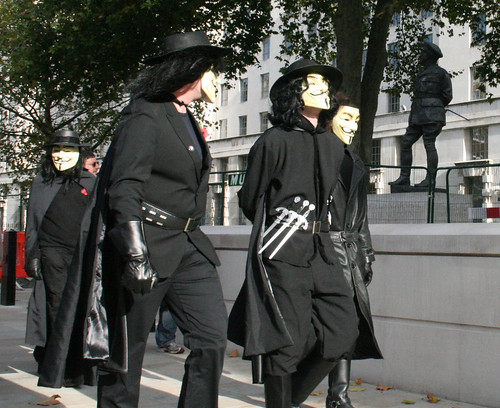 Once the group got to the gates, the lead V leant over to present the rose, but the police were noticeably uncomfortable and didn’t want to play along. After a few attempts, V carefully placed the rose on the barrier as a gift, pointing out that he had paid his taxes on it. 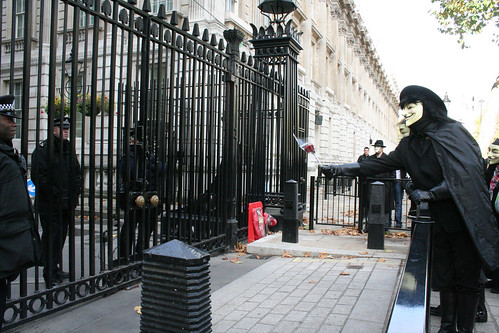 As the group processed down Whitehall to a pub, some speculated about the future fate of that rose and wondered aloud if it was about to be dealt with as a potential bomb.

I had to leave them at the pub, although they went onto Parliament later to seek entry as a member of the public is entitled to do. I popped back to Downing Street, but the rose had already been removed.

I also arrived late, so missed them congregating at the pub. Opps!

1 Pings/Trackbacks for "V for Vendetta – Live in Westminster"