British artist Tobias Wilkinson documented the daily life of the last British tank soldiers to leave Germany, prior to their homecoming in 2019. Don't miss the chance to explore his work in this photographic display.

Almost 75 years after the Second World War ended, the UK’s last tank regiment in Germany, The Queen’s Royal Hussars, returned to the UK.

The four British cavalry regiments which now constitute The Queen’s Royal Hussars had come to a halt in Europe following the German surrender in May 1945. The men of these units remained in Northern Germany, serving as tank soldiers.

From 1998, aside from tours in Iraq and Afghanistan, The Queen’s Royal Hussars (nicknamed ‘Churchill’s Own’) were based at Athlone Barracks in the military town of Sennelager. The camp was first used by the Prussian army in 1851, before becoming a training area for the Wehrmacht. After 1945, it served as a base for a series of British tank regiments.

Tobias Wilkinson documented the daily life of The Queen’s Royal Hussars in barracks in Sennelager, as well as their deployment for their final set of manoeuvres on the live firing ranges of Bergen Hohne in Lower Saxony. His work tells the story of an often-forgotten part of Britain’s military history in Europe.

Free  Falklands at 40
Discover the story of the Islanders whose lives were altered by the Falklands War. 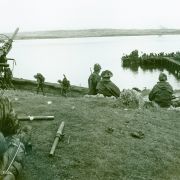 Free   Foe to Friend: The British Army in Germany since 1945
This exhibition follows the lives of British soldiers in Germany over the past 75 years. 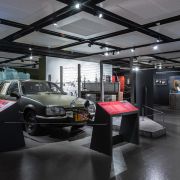