The Dulwich Picture Gallery marks the 350th anniversary of Rembrandt’s death (1669) with Rembrandt’s Light, a major exhibition exploring the artist’s mastery of light through 35 of his greatest paintings, etchings and drawings.

Arranged thematically, the exhibition traces Rembrandt’s mastery of light and shadow, revealing how he used both for dramatic effect, from evoking different moods in religious and mythological stories, to depicting raw human emotion in the subjects he knew well. It will focus on Rembrandt’s critical middle period of 1639-1658 when he lived in his dream house on the Breestraat in central Amsterdam.

The exhibition will showcase a new LED Bluetooth lighting system at the Gallery, and leading cinematographer Peter Suschitzky, famed for Star Wars: The Empire Strikes Back; The Rocky Horror Picture Show and Mars Attacks!, worked with the curators to devise an atmospheric visitor experience. Through carefully constructed lighting and innovative design, the exhibition spaces reflect the variety of Rembrandt’s work, from high-drama and theatricality to the contemplative and spiritual.

This approach takes inspiration from Rembrandt’s own words in a letter of 1639, when he cautioned a new owner of one of his paintings to: “hang this piece in a strong light and where one can stand at a distance, so it will sparkle at its best”.

The exhibition begins by addressing the artist’s sophisticated control of light to convey motion and emotion. Key paintings demonstrate the influence of contemporary theatre on Rembrandt’s method, including the The Denial of St Peter, 1660 (Rijksmuseum, Amsterdam), where multiple moments of the story are told within a single scene, and The Woman Taken in Adultery, 1644 (The National Gallery, London), where the figures inhabit the temple setting as though they were actors on a stage.

‘Manipulating Light’, the second section of the show, transports visitors to Rembrandt’s workshop, as witnessed in his drawing The Artist’s Studio, c.1659 (Ashmolean Museum, Oxford). The means by which Rembrandt evoked day and night will be explored in etchings from the Rembrandt House Museum including Student at a Table by Candlelight, c.1642 and Woman with an Arrow c.1661, as well as his only surviving nocturnal painting, Landscape with the Rest on the flight into Egypt, 1647 (National Gallery of Ireland).

The penultimate section, ‘The Meditative Mood’, focuses on Rembrandt’s religious and intellectual works. Rembrandt’s ability to create multiple layers of meaning and subtle shifts in mood made his works enduringly popular as tools for private contemplation. In Christ and St Mary Magdalen at the Tomb, 1638 (Royal Collection Trust), the dawn breaking over Jerusalem echoes the dawning recognition between the characters in the scene.

The exhibition culminates with a selection of compelling figurative paintings including the Gallery’s Girl at a Window, 1645, which will be displayed for the first time alongside A Woman in Bed, c. 1645-6 (National Museums Scotland) and A Woman Bathing in a Stream, 1654 (National Gallery, London).

Rembrandt’s Light will be the first exhibition to be curated by Jennifer Scott since becoming Director of Dulwich Picture Gallery in 2017 and is co-curated by the Gallery’s Assistant Curator, Helen Hillyard.

The accompanying book, Rembrandt’s Light, by Jennifer Scott and Helen Hillyard, is published by Philip Wilson Publishers and includes essays by the curators and by David de Witt and Franziska Gottwald and features an interview with cinematographer Peter Suschitzky. 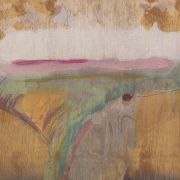