The historic home of William Hogarth is offering a glimpse into the world of eighteenth-century politics with their new exhibition “Parish, City, State: Hogarth and Government”. Showcasing Hogarth's famous Election series, alongside his other depictions of public figures, visitors will see how Hogarth used satire to both support and undermine the politicians of his day.

In this election year Hogarth’s art lets us look at how Government worked in a different age. Visitors will see historical prints Hogarth made; some of which led to long running feuds between the artist and his subjects. From the Parish Beadle to Mayors and Members of Parliament, Hogarth showed and satirised his government at every level from local to national. By letting us look through his eyes these works reveal the murky world of eighteenth-century politics.

The Election series itself satirises a particularly brutal election campaign in 1754 featuring unprecedented levels of bribery and corruption. These works also highlight Hogarth’s skill as an artist, with the head-striking brick thrown by a disgruntled member of the public in ‘An Election Entertainment’ being described as “the most animated brick in the history of painting”.

When Sir John Soane acquired the original paintings in 1823 The Gentleman's Magazine criticised the series for 'the very many disgusting, if not depraved exhibitions of human nature' they depicted. However Soane recognised them as some of the finest of Hogarth's satirical works. Now, for a limited time, original prints of these works will be viewable to members of the public for free and offer a fascinating look at politics in the past.

Other exhibitions open at Hogarth's House 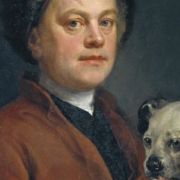