Exhibition: Freud, Dalí and the Metamorphosis of Narcissus

Sigmund Freud and Salvador Dalí are two of the most significant and influential figures of the twentieth century.

Dalí was a passionate admirer of the father of psychoanalysis and finally met him in London on July 19th 1938. This year 2018 marks the 80th anniversary of this event. A new exhibition at the Freud Museum will explore the connection between the two men, starting from their one meeting, to which Dalí brought his recently completed painting The Metamorphosis of Narcissus.

The painting, on loan from the Tate, will be the central point in the exhibition for an exploration of the extensive influence of Freud on Dalí and on Surrealism. Also considered will be Freud’s own attitude to painting, illuminated by his response to this encounter with Dalí.

Dalí had read The Interpretation of Dreams as an art student in Madrid in the early 1920s. This was, he wrote, “one of the capital discoveries of my life, and I was seized with a real vice of self-interpretation, not only of my dreams but of everything that happened to me.” This passion for self-interpretation took not just visual but also written form. In 1933 Dalí wrote a “psycho-analytical essay”, as he described it, on the famous painting by Jean-François Millet, The Angelus. The essay was eventually published as a book, The Tragic Myth of Millet’s ‘Angelus’. In it, Dalí explores his own obsession with the painting, which he lays out in the form of a Freudian case history.

In 1938, after several attempts, Dalí finally met his hero Freud, newly arrived in London after fleeing from Nazi-occupied Vienna. The meeting was brokered by Stefan Zweig, who was present, together with Dalí’s friend and patron Edward James, who owned The Metamorphosis of Narcissus. Dalí hoped his painting would allow him to engage Freud in a discussion of the psychoanalytical theory of Narcissism and would help him to demonstrate his concept of critical paranoia.

Dali was given permission to sketch Freud during the visit. These drawings, now in the Fundacio Gala-Salvador Dalí in Spain, will be on display, and Dali’s long poem with the same title as the painting, The Metamorphosis of Narcissus. There will also be material from the Freud Museum’s archive and collections, shedding light on Freud’s attitude to Dalí and their meeting.

Other themes of the exhibition will include the classical origins of the myth of Narcissus and the place of narcissism in psychoanalytic thinking. Freud’s own collections will play a part. For example, they include a copy of the classical relief Gradiva; Freud’s study of Wilhelm Jensen’s novel Gradiva was the inspiration for some of Dalí’s important paintings and drawings on this theme from the early 1930s.

Through images, including original paintings and drawings, photographs and prints, and documents including letters, manuscripts, books and Freud’s appointment diary, the intense – if somewhat one-sided -relationship between two extraordinary thinkers and creators will be explored.

The exhibition will be curated by the distinguished art historian Dawn Ades, curator of the recent highly successful Dali/Duchamp exhibition at the Royal Academy of Arts.

Other exhibitions open at Freud Museum

£14  Freud and China
This exhibition explores Sigmund Freud's fascination and relationship with China. 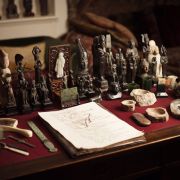 £14  Lucian Freud: The Painter and His Family
The first exhibition of Lucian Freud’s work in the home of his grandfather, Sigmund Freud, and aunt, Anna Freud
Open from Wed 6th July to Sun 29th January 2023 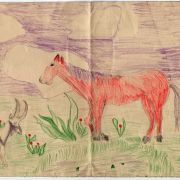