Exhibition: Egypt Uncovered: Belzoni and the Tomb of Pharaoh Seti I

To coincide with the 200th anniversary of the discovery of the tomb of Pharaoh Seti I by the Egyptologist Giovanni Battista Belzoni (1778–1823), we present a new exhibition revealing the story behind the Museum’s most treasured possession.

Known as ‘The Great Belzoni’, Giovanni Battista Belzoni was one of the most famous and pioneering explorers of his age, and played a crucial role in the development of Egyptology as a scientific discipline. A former circus strongman based in London, in 1815 Belzoni took up the role of engineer in Egypt, charged with the removal of large and heavy antiquities. This included the seven-ton bust of Pharaoh Ramesses II, taken from the king's memorial temple at Luxor that now sits in the British Museum.

On 17 October 1817, Belzoni made his finest discovery: he found the tomb of Ramesses’ father, Seti I comprising ten vividly painted chambers decorated with thousands of hieroglyphs, and Seti’s elaborately carved white alabaster sarcophagus. The sarcophagus was removed by Belzoni and eventually purchased by John Soane in 1824, who gave it pride of place in the Sepulchral Chamber at the heart of the Museum.

This exhibition brings the story of the sarcophagus up to date. Alongside Belzoni’s accounts of its discovery and tales of the high profile ‘sarcophagus parties’ Sir John Soane held in 1825 for ‘distinguished fashionables and literary characters’ to celebrate his purchase, the exhibition also presents more recent conservation and research into the object. In addition, the exhibition will feature a new high-resolution 3-D digital scan of the sarcophagus by Factum Arte, which will be displayed adjacent to real fragments of its broken lid.

Free  The Romance of Ruins
This exhibition showcases a series of powerful and poetic watercolours made on an expedition to discover the ruins of ancient Ionia (modern Turkey) in 1764. 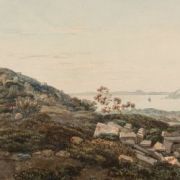