About the The Queen's Gallery

A public art gallery that displays some of the works from the Royal Collection, which is owned by the Monarch on behalf of the nation.

There is usually a change of displays every six months, with each fresh exhibition themed around a specific topic.

Unlike many art galleries, this one only ever displays items owned by the Monarch and never includes outside items.

£16  Masterpieces from Buckingham Palace
Sixty-five paintings that usually hang in the Picture Gallery at Buckingham Palace and are widely acknowledged to be among the highlights of the Royal Collection have been brought together in a gallery exhibition for the first time. 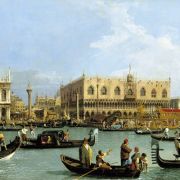 Get up close to some masterpieces from Buckingham Palace

The refurbishment of Buckingham Palace has given the nearby Queen’s Gallery a rare opportunity to put a range of Masters on display in a gallery setting for the first time.

Two very different exhibitions, both celebrating the splendours of the Indian subcontinent — from Mughal paintings to jewellery and elaborate weaponry — both at The Queen’s Gallery.

See the other King George’s in the Queen’s Gallery

We all know old mad King George III, but who were the other two monarchs? That is a question that a new exhibition at the Queen’s Gallery seeks to answer.

What was the mystery obelisk alongside the Thames?

Around 1750, Canaletto painted a scene of London from Somerset House towards Westminster. It shows all the obvious things you would expect to see…

Past and future geniuses of art at the Queen’s Gallery

A dual exhibition has opened that is devoted to the art of drawings upon paper — one half devoted to an acknowledged lost genius, and the other half to modern day artists, most of whom can be presumed to want to avoid the same title.

A more widespread counterpart to its Italian cousin, the Northern Renaissance swept across northern Europe in the 15th and 16th centuries, affecting art, literature and even politics in a time of Protestant turmoil and the English reformation. Digging into the…

A look around the Leonardo exhibition at The Queen’s Gallery

Is it art or is is science? A display of drawings by a Renaissance artist would seem to be art, but they are the earliest known systematic studies of human anatomy, so they seem to be science. This is the…