About the Imperial War Museum

Based in an imposing former hospital, this museum museum tells the stories of people's experiences of modern war from WW1 to conflicts today.

Often has a major exhibition on to compliment the main displays which feature everything from classic armaments to modern UN vehicles.

A large collection of medals and the stories of the bravery that lead to them is in the upper floors.

Free  Wim Wenders: Photographing Ground Zero
This exhibition presents large scale photographs taken less than two months after the attacks, as the gravity of the 9/11 terror attacks left a new world in their wake. 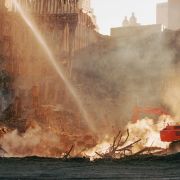 On the weekend that the new Museum of the Mind opened at Bethlem Hospital in south London, I wandered over to its former home in Lambeth for a bite of lunch.

Free  Edmund Clark: War of Terror
This exhibition brings together several series of work by artist-photographer Edmund Clark to explore the hidden experiences of state control during the 'Global War on Terror'.
2017-02-12
2017-08-23
£10  People Power: Fighting for Peace
Take a journey from the First World War to the present day, exploring how peace movements have influenced perceptions of war and conflict in this major exhibition.
2017-03-23
2017-08-28
Free   Afghanistan: Reflections on Helmand
This exhibition examines the British arrival in Helmand province, Afghanistan, and the decisions that shaped the way the conflict escalated and the lessons learnt.
2017-07-16
2017-11-26
£15   Age of Terror: Art since 9/11
The UK’s first major exhibition of artists’ responses to war and conflict since the terrorist attacks on 11 September 2001.
2017-10-26
2018-05-28
Free  African Soldier
This multi-screen installation by artist John Akomfrah remembers the millions of African men and women who participated in the First World War
2018-09-21
2019-03-21
Free   I Was There: Room of Voices
In this immersive sound installation, 32 people who fought and lived through the First World War share their personal stories of the Armistice.
2018-09-21
2019-03-31