About the Heath Robinson Museum

A fairly new museum devoting to the drawings of Heath Robinson, best known for drawings of ridiculously complicated machines for achieving simple objectives.

Free  John Hassall: Illustrator and Poster Artist
This exhibition seeks to explore key aspects of John Hassall’s work, and to celebrate the life of this extraordinary artist a century on from his heyday. 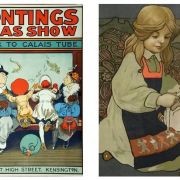 London is to get a new museum in October, as the Heath Robinson Museum in Pinner, North-West London has confirmed its opening date.

£6.60  Charles Keeping: Londoner & Illustrator
This exhibition confirms Charles Keeping’s stature and contribution not just as a major picture-book artist but also as a revelatory illustrator of Dickens for the Folio Society.
Pinner
2021-07-24
2021-07-24