About the Hampton Court Palace

Hampton Court Palace is a Grade I listed royal palace, famously built by Cardinal Thomas Wolsey, the chief minister of King Henry VIII, and given to the King as a gift.

Today, huge grounds and ornamental gardens compliment the massive palace building, both of which are open to the public.

A range of events takes place throughout the year, and guided tours every day.

£25.30  Gold and Glory: Henry VIII and the French King
A special exhibition of dazzling Tudor treasures celebrating the 500th anniversary of the Field of Cloth of Gold
Open from Wed 19th May to Sun 5th September 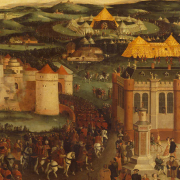 The gardens at Hampton Court Palace have reopened to the public to help with a bit of lockdown walkabouts.

Although some of the gardens are already open, the main buildings at Hampton Court Palace remained closed, until now.

Two large ornamental gardens are reopening now that the lockdown is relaxing, at Kew and Hampton Court.

For the next few weeks, there’s a half-price entry deal to visit Hampton Court Palace.

Next year marks the 500th anniversary of one of the more important, and visually impressive diplomatic missions between the British and French monarchies, the Field of Cloth of Gold.

The lost dress of Elizabeth I – Revealed

Imagine if someone from London arrived at your most rural of rural churches and told you that bit of old fabric on the wall is worth a king’s ransom?