About the Guildhall Art Gallery and Roman Amphitheater

A fairly modern building on the historic Guildhall that houses the City of London's impressive art collection.

There is a permanent display, of mostly Victorian art, but also a large section set aside for a regularly changing display in the basement.

A monthly heritage piece is shown off next to the cloakroom.

In the deep basement though is the uncovered remains of London's Roman Amphitheater. 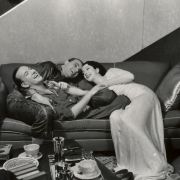 A room inside the Guildhall is currently filled with woodworking tools, as this year marks the 450th anniversary of the granting of a Royal Charter to one of the City of London’s livery companies

The real Noël Coward, the man beneath the dressing gown

Noël Coward, so often seen as an upper-class dandy in a dressing gown, but who was actually a middle-class workaholic, charity fundraiser, and even now, some of his work in WW2 remains classified.

The past and future of Thames Bridges

An exhibition is taking a look at the past paintings and the future illuminations of the bridges across the Thames.

One of the many maps of bomb damaged London has gone on show in the City of London’s heritage gallery, alongside a declaration about the end of WW1.

The year football was banned in London

In 1314, Nicholas de Farndone, the Mayor of London, acting on behalf of King Edward II, banned the “striking of great footballs” in the City of London.

For the next few months, there’s a chance to see a selection of works by one of the greatest Victorian potters, William De Morgan, inside the City of London Guildhall.

There’s an exhibition open at the moment about death and mortality. It opened a couple of months ago, and I’ve been struggling to think of something to say about it.

A curiously powerful and moving collection of art created by school children, but inspired by memories of WW1, with a Flanders trench like pathway to navigate.

See the oldest document in the City of London archives

The oldest document in the City of London, dating back to the time of William the Conqueror is currently on display in the Guildhall.

A stage will be set up in Guildhall Art Gallery’s Basinghall Suite with a lectern and a free standing microphone to enable people to read, recite or perform their piece.

Behind the scenes at the City of London

Whenever the City of London puts on its pomp and ceremony, off stage, frantic preparations are taking place, and now some of those preparations have been revealed.

Two drawings of London’s skyline have gone on display side-by-side, one made in 1616 showing the old London, and a recreation showing London from the same location today.

The newish, and smallish Heritage Gallery inside London’s Guildhall has put out a display of WW1 and WW2 maps and photos.