About the Charles Dickens Museum

One of many homes occupied by Charles Dickens, this is now a fully restored museum devoted to his life.

Rooms are laid out as if the Dickens family are still living there and have just stepped out for a moment.

A recent extension into the neighbouring building allowed for a lot of heritage to also be put on display without spoiling the history of the original home.

£9.50  Technicolour Dickens: The Living Image of Charles Dickens
This exhibition explores the power of the writer’s image, tracing his image through artist interpretations, radical rethinking in popular culture and new digital technologies and re-imaginings. 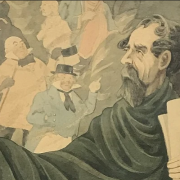 £9.50  More! Oliver Twist, Dickens and Stories of the City
This exhibition explores the characters, events, places and personal tales of triumph and tragedy that inspired and shaped the novel that made Charles Dickens a household name across the world.
Open from Wed 30th June to Sun 17th October 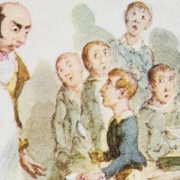 Charles Dickens family home, now a museum, has confirmed that it will be reopening on 19th May, and its Technicolour Dickens exhibition has been extended for an extra month.

Over three nights, a performance of A Christmas Carol will take place inside Charles Dickens home, and it will be done live and by candlelight.

A Christmas of talks about Charles Dickens

Christmas seems somewhat synonymous with Charles Dickens, and the Charles Dickens Museum is hosting a series of appropriate talks over the next few weeks.

One of the curiosities about Charles Dickens is how familiar we are with the image of the elderly bearded classically Victorian man we are. No other author of the time is as instantly recognisable.

The museum inside Charles Dickens London home is reopening after its virus lockdown, with a new exhibition that will include eight newly colourised portraits.

Twenty-five previously unseen letters written by Charles Dickens have been donated to his museum by an American collector, as part of a huge donation of over 300 items.

At the back of a row of posh terraced houses in Bloomsbury is a small comfortable cafe – inside the Charles Dickens Museum.

The first Christmas card goes on show in London

1843 was an important year in the history of Christmas, and a new exhibition at the Charles Dickens Museum is bringing them together for the first time.

Exhibition looks at the internationalisation of Charles Dickens

The Charles Dickens Museum has put on one of its occasional exhibitions, this time looking at the man’s international fame and impact.

£9.50  Food Glorious Food: Dinner with Dickens
The Charles Dickens Museum explores the pivotal role of food in the author’s life and novels and give new insights into the experience of dining with Dickens.
2021-06-19
2021-06-19

£9.50  Global Dickens: For Every Nation Upon Earth
This exhibition presents a global picture of Dickens, exploring the impact of his travels on his life and his writing, and it examines how Dickens has gone on to shape the lives of people around the globe.
2021-06-19
2021-06-19