Posted on 14 January 2013 by Posted in History, Transport News

For a hundred years, steam trains carried passengers along the London Underground until the steaming iron beasts were finally extinguished by the white heat of technology in 1961.

For over a third of its history, the London Underground has been the dominion of the cold unfeeling electron. Breathing fiery locomotives replaced by small metal boxes that suck up unseen energy from the 3rd-rail and cause glaringly bright tubes to glide along tracks.

But yesterday, for the first time in over 50 years*, passengers were hauled by the raw undiluted force of coal and water once again.

While most of the trains were running in the evening, there was one early special for LU’s staff (and Boris) and which also offered an opportunity for photo-fans and train geeks to sate their hunger during the daylight hours.

Selecting a quiet road behind Bayswater Station that had clear tracks facing both east and west – and then loitering about for a while as the whine of electric engines propelled people to destinations below. A road bridge behind us had more train fans popping their heads over the parapet. A row of anoracked meerkats looking out for their prey.

Eventually though the electric whine was replaced with the distinctive hissing and chugging that heralds the arrival of a more primal form of propulsion.

Out of the tunnel and into the cutting left for older steam trains, along came the Met No 1 locomotive. Delightfully, the train was at full speed and belching out loads of thick white steam. What was a nuisance in Victorian times is now a rare treat in the second Elizabethan age. 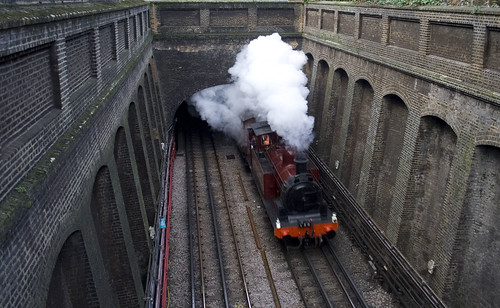 Passing under the road, caused leaping off the ladder to run to the other side. Nearly tripping over my own feet, flinging the ladder to the other wall and the sight of the train heading into Baywater station with a toot for the bystanders within. 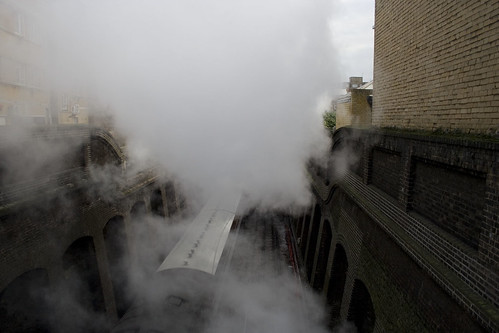 It’s actually worth noting that the original steam trains that ran along the Underground put out far less steam than we were seeing today. This locomotive lacked the water condensers that the early trains came with. It may not be historically accurate, but what a joy to see a steam engine blasting out huge amounts of steam.

An hour of travel and preparation for a few seconds of delight, and worth every second of it.

The train ran to Moorgate, and following on its modern ancestor, there were the obvious signs of people who were out for a steam train now filling the modern carriages.

Moorgate has been fitted out with heritage displays. A brass band playing added to the surreal atmosphere, but no less than the distinctive flinty smell of a steam engine concealed behind a decorative Circle-Line train. 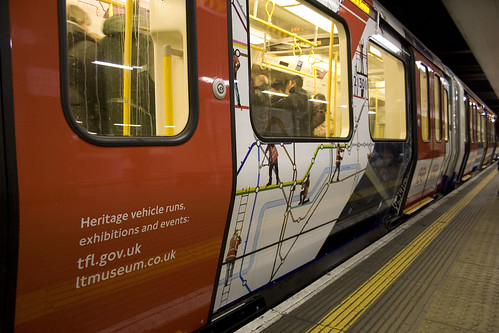 A couple of hours later, the train made its inaugural public trip heading back again under power from the cold unfeeling electrons, but this time encouraged to animated activity by the almost as old Sarah Siddons locomotive.

Dragged backwards, the steam engine was more aesthetic adornment, but put out reassuringly handsome puffs of steam as it passed through the stations. Small collections of train geeks with cameras were outnumbered in most places by the general public who gapped in awe and surprise as this strange leviathan disturbed their previously mundane trips from hither to thither.

Most of the train fans were waiting though — for in the evening, the steam train ran once again the full length of the line — recreating the morning’s VIP trip with ordinary passengers.

Kensington Olympia, a station recently shorn of its regular District Line service was the departure point of choice, and huddles of excited people greeted each other as old friends are wont to do, while a few wide eyed children with equally wide-eyed dads could be spied amongst the anorak clans.

Only a short time to get photos of slam-doors on the underground before the distinctive sound of a steam engine straining to get moving as lengthy deliberate chug…chug….chug was slowly replaced with the faster lighter sounds of the engine chugchugchugging away at ease. 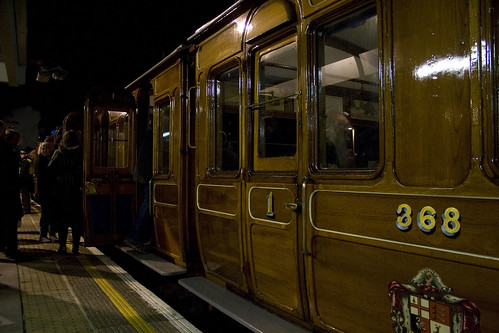 Through Earl’s Court and waving to the crowds who thronged the platform – and had we known, a wave to Annie Mole who watched forlornly from the sidelines as the train she was supposed to be on passed by unheeding.

Through quiet Kensington High Street where fans were outnumbered by newly astonished commuters and onto Bayswater where I had stood only a few hours yet also an entire century ago. Slowly the crowds were growing as we approached Baker Street.

For reasons which have never been entirely clear, an awful lot of people think Baker Street was the first station on the Underground, even being built in isolation before the rest of the line. Maybe it is its restored Victorian design which is in such contrast to the rest of the railway, but people seem genuinely surprised when you point out that it is just an intermediate station on a line with more important stations elsewhere. 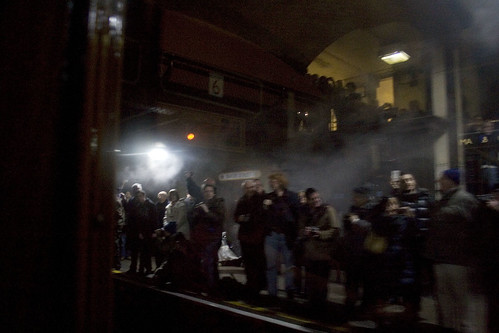 Today though, Baker Street is the place to take photos of a steam train on the Underground, and the platforms were thronged with people delivering that modern salute to heritage — an outstretched arm holding a camera.

Slowing for the photos, the train slowly growled its way past the fans and left a blast of steam, flinty noisome odours and a few hundred grinning faces in its wake.

Passing through tunnels with their glowing lights obscured by wafts of steam, it almost looked as if these modern illuminations were hellfire discards from the steam engine ahead. 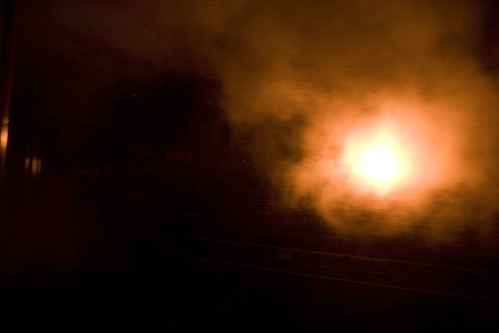 Onward through the stations to King’s Cross where train geeks were scarce in this modern edifice, and people recently departed from overground trains were given the shock of steam as they waited to complete their trips home. Out came the camera phones, and their more recent replacements — the huge tablet devices — as people tried to capture the unexpected moment.

Along the entire line, hundreds of people watched a steam train pass, by watching it on a tiny screen on their phone or camera. The vicarious vision of steam was fortunately enlivened by the smell, the clouds of steam and comradeship.

Finally, into Moorgate, where a huge crowd awaited – not bystanders, for these were the excited fans waiting to catch the return trip. And our trip was over. 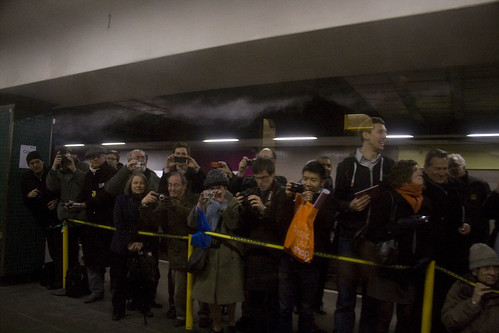 For a while we were able to travel along familiar train lines and past familiar stations – as unfamiliar faces stared in amazement as this historic relic passed them by.

And the whole thing happens again next Sunday, so you too can be a bystander in the stations breathing in the sooty air for a few memorable seconds.

Oh, and I added a commemorative cup to my collection from the inevitable gift shop at Moorgate.

More introspectively, I am left wondering how all this affects our opinions of the London Underground. Not just the steam fans and history geeks, but the average person using the tube on a daily basis.

The tube (in all its guises) had a good Olympics, better than most expected, and there seems to have been a lot of foreign media interest in the anniversary – probably in part due to those foreign journalists being impressed last summer.

Most Londoners seem to have a slight love/hate relationship with the tube, often boosted by visits abroad where such expansive public transport networks don’t exist. And while we curse the crush, we love the ramshackle appearance and the quiet knowledge that ours was the first. The media fuss about the anniversary, and the steam train run has certainly heightened awareness of the latter, and I wonder if that has nudged how people look at the tube network – or is it an anachronistic irrelevance?

For while heritage trains are damn fun to watch or ride in, they do need to be squeezed in to an increasingly congested timetable. The old 1938 tube train is already constrained by its old systems that wont work with modern tube tunnel signals and either needs an expensive upgrade or a very large gap between it and following trains when out for trips.

Last night’s steam run was slightly helped by being on a Sunday when people might be more used — if not so tolerant — of long waits between trains.

Vintage trains may delight and amaze people out for a normal commute to wherever, but they are going to have to remain an exceptionally rare sight. Which is a pity.

Not to mention that while the Transport Museum gained a fully restored carriage, courtesy of your Lottery tickets, the other carriages belong to the Bluebell Railway and they will want them back.

If wishes were to be granted, I would love a trip in a topless carriage so we can admire the often overlooked engineering of the tunnels themselves without trying to peer through glass that seems more determined to reflect our curious countenances back at us than reveal the dark secrets beyond.

The message that TfL is putting out of course is that if we want to keep up with the growing population of the Metropolis, then more investment is needed, potentially on a scale not seen since the later part of the Victorian age. A message that was delivered in a 100 year old locomotive sitting next to recently modern delivered Circle-line trains.

I wonder what an equivalent photo would look like in 150 years time?

In the meantime, more of my often very blury photos over here 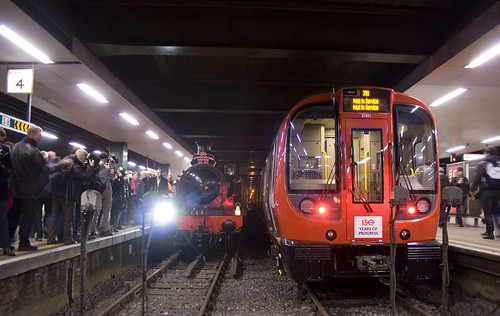