Photos from the top of The Shard skyscraper

Posted on 11 January 2013 by Posted in Events and Tours

In a few weeks time, London’s latest tourist attraction opens as the viewing floors at the top of The Shard skyscraper start welcoming their first paying customers.

Between now and then, around 12,000 locals will get to test out the facilities, and a few of us were up there earlier this week for a look around. 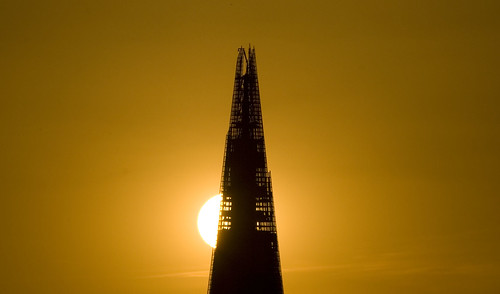 I have a bit of a love-hate relationship with the building. From a distance, it is OK, even if the glassy blue shard of glass we were promised looks more like a galvanized steel nail. It is up close that I have concerns, as frankly, it looks cheap. There seems to be very little external detailing such as how the building rams into the ground rather than having neat edging around the pillars and walls. Subtle, but a few thousand pounds here and there at the point that the public can get closest to the structure makes a huge difference.

Compare the Gherkin to the Shard at the ground level and the difference in quality is clear, and important.

So, will I be a petulant Guy de Maupassant and declare that the best place to be is at the top of The Shard as it is the only place I can’t see it?

What is formally known as The View from The Shard has its entrance in one of the rather fetching brick arches underneath London Bridge and once through the ubiquitous security scanners, there are now two lift journeys to the top.

Straight up to the 33rd floor, which is a dark room with a huge map of London on the floor (and soon to cover the walls), but around the corner and up in the second lift to the 68th floor. Ears may pop on the trip.

Leaving the lift, you are faced with the glass windows that should provide a vista across London – except that they are covered in blue clouds, which if you look carefully are representations of actual clouds you can see over London. But they don’t want you to linger too long, so deliberately obscuring the view is to get you away from the lift and up a final flight of stairs to the viewing floor itself. 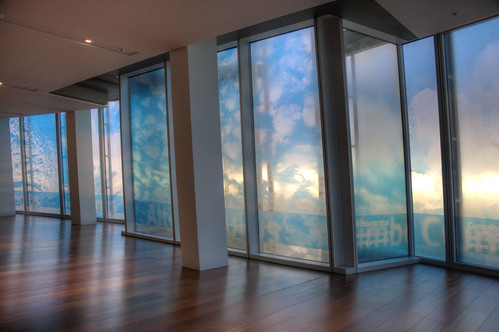 Frankly, this is a very polished area and has a quality that is in marked contrast to the exterior of the building at ground level. Even the building facade appears more detailed and interesting now that you are on the inside looking out.

Although the viewing area is on two floors, each occupies three stories in height, giving the area a sense of grandeur which might be lacking if they had gone for three double-height floors. 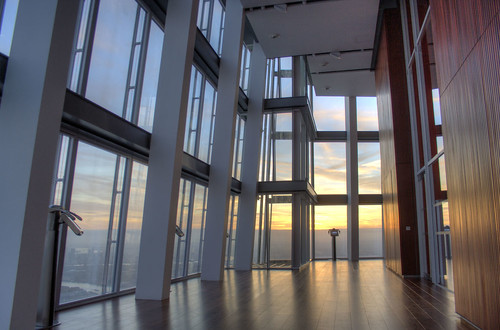 This is however an enclosed room, albeit one with three floors of glass in front of you to admire the views. It’s the upper level that can leave you shivering either from fright or the cold, as it is open to the environment.

Although there are still several stories of building above, this is also where the glass walls start to splinter, leaving gaps in the previously solid walls and letting in the London air and in doing so is more rewardingly challenging for those troubled by heights to deal with. The glass walls are never low enough to peer over, but opening it up to the local weather gives it a connection with the outside that reduces the feeling of protection offered by the safe indoor environment just below.

I found it delightful. 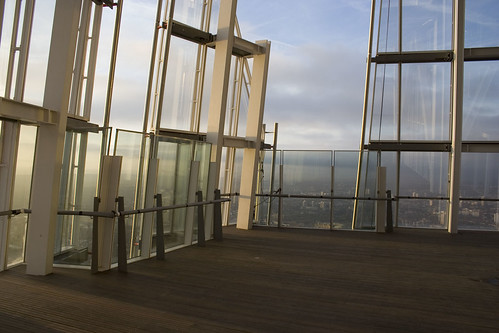 Of course though, this is The View from The Shard, and it is the views that people will come here for. I was able to visit just as sunrise was occurring, as there is a magical moment when there is enough light to see the physical outlines of the buildings, but it is dark enough for the street lights to still be on. 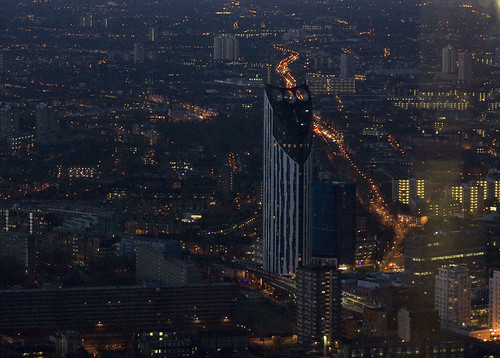 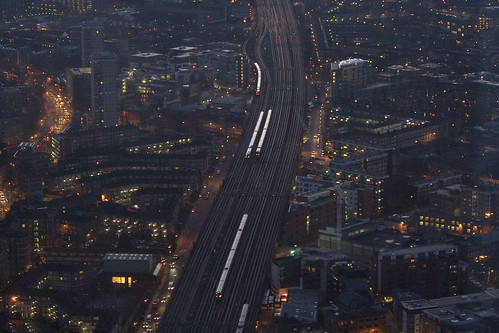 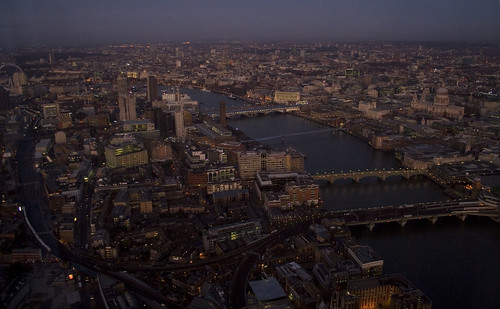 On the slightly hazy morning, the views were pretty much limited to Zone 4 of the travelcard, although on a clear day they should stretch further. 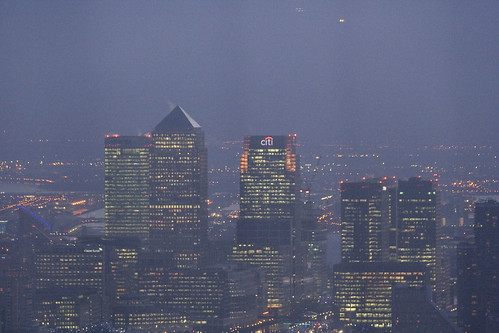 The lower level also has some disembodied fitness machines, that are actually digitally enhanced telescopes. A local wi-fi connection lets cameraphones send photos to the ground floor to be printed out as you leave.

Actually, one of the best places to take photos, if you are a group, is for one to stay on the staircase looking down on to the lower level and photograph the group there. 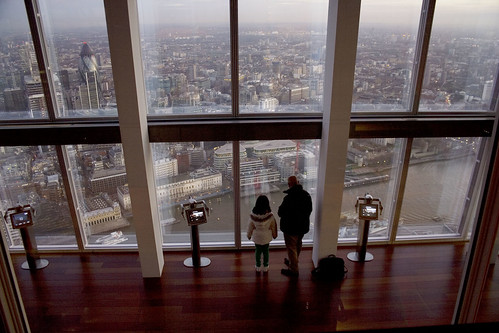 Leaving the viewing gallery, is a small gift shop — obviously — but as it is on the 68th floor, this does make it London’s highest gift shop. I did quite like how the books are stacked on their end like mini-shards. A rather larger version is on the ground floor just in case you miss the smaller one upstairs. 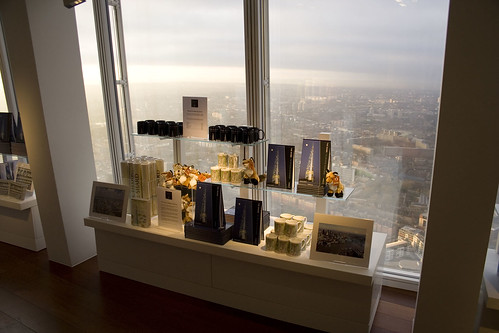 The main question is – do I think it is worth it?

It is not a cheap place to visit, and at £25 for adults and £19 for children aged 4+, for a family it is going to be very expensive.

As a one-off special treat, yes frankly, it is the tallest building in Western Europe, so there really isn’t much alternative to see quite so much of London from so high without flying over it. But it is the height that is its only selling point, as other viewing platforms do exist, and have given Londoners an eye in the sky already.

Edit – pondering after I wrote this, while the headline charge of £25 sounds high, that is for an hour or more at the top of the building – compared that to 30 minutes rotating on the Eye for £18. Doesn’t look quite so bad in comparison.

Just time your visit for the sunset hour – to get the magical blending of dusk and night over London. Then you’ll be really getting your moneys worth. 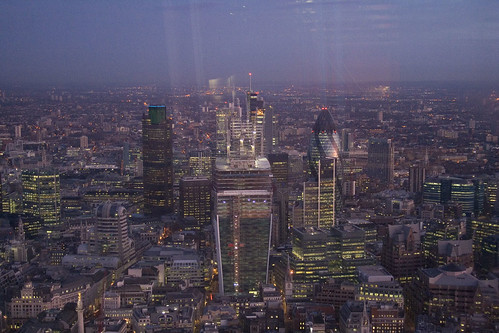 The View from The Shard opens to the public on the 1st February and you have to book in advance.

The rest of my 40 photos are over here.

NEWSLETTER
Tagged with: the shard