Posted on 7 January 2013 by Posted in History, Transport News

This coming Sunday, London Underground will send a steam train along the original Metropolitan Line and parts of the District Line – so I wandered out to check where the best places will be to watch it.

At the time of writing, there is no formal policy from up-high to the station staff about how to handle spectators at the stations themselves – it seems to be left to the individual stations to manage using their standard crowd control procedures.

So – photography within stations means no flash and no tripods. It also means no loitering, which could be problematic. Do you arrive just before the steam train so as to not loiter on the platform, only to find it is ram-packed full of people, or do you try to turn up early and bag a good spot?

From a “size of crowd” perspective, I think that Earl’s Court station could be the best thanks to its two footbridges over the tracks, and the high-level walkway above one platform. Farringdon is also another option thanks to another footbridge and plenty of space on the platforms. The other stations might be just too crowded to risk.

So, where else along the line can you get photos from?

The steam train runs between Moorgate and Kensington Olympia, with some shorter trips turning around at stations along the route. What it important to note is which direction the train is travelling when under steam power, as sometimes it travels “backwards” with the electric locomotive at the back of the train pulling it.

That will affect which way you face if you want photos of the steam locomotive.

Note – many of the street locations are looking over walls and need a small step-ladder. I use a light three-step ladder which was fine for all sites.

A refresh of the timetable

Edit 15th Jan – times have changed from original timetable and a lot more trains are running. Thanks Chris!

There are quite a few platforms, but I am assuming that the train will leave from the Earl’s Court facing platform closest to the Olympia building.

The best views will be from the side road, where a wire fence slightly blocks the view, but most cameras can easily shoot through the gaps. You can also get a decent view if tall from the road bridge (A 315) over the tracks.

Next to the road bridge on the eastern side is a very good vantage point to see the train and platform – but it is a small patch of space no more than 6-8 people wide.

A trackside location exists on a side street, and while it has a high fence, it is thin enough to watch through, if probably not photograph unless you get really close. Note that the Overland tracks are between you and the steam train – very unfortunate timing could mean the view being obscured. 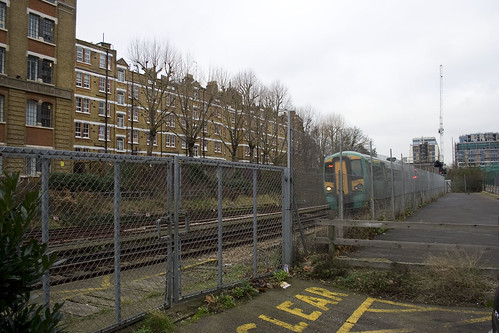 Almost certainly the best photo location though is next door, at the Tesco superstore car park. This sits facing the tracks to the north, and also has fairly decent views to the south.

A phone call to the store and a duty-manager told me that it wouldn’t be a problem for pedestrians to use the car park at that time of night – so long as people aren’t loitering around for hours. Access is via a grand set of stairs at the front of the store.

Just around the corner is the A4 West Cromwell Road. The bridge over the railway has walls that most people will be able to peer over without difficulty. The main problem is that the pavement is quite narrow and as the road is very busy I would strongly recommend not blocking the pavement here if you can go to Tesco instead.

Apart from the platforms, there will be good vantage points along the over-head walkway and the bridge to the lifts. There is also viewing options in the corridor leaving to the exhibition centre and the overbridge linking the platforms there – but you will be watching through reinforced glass windows in those locations. 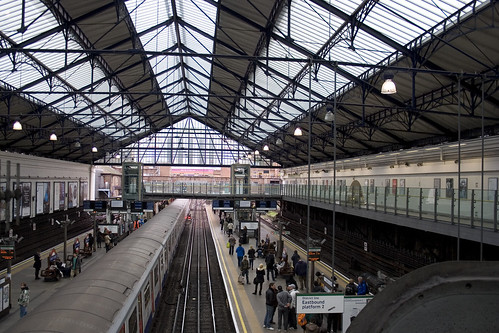 Within the station limited viewing options save maybe at the very ends of the platforms as it is a busy station and quite small. I would avoid frankly.

There is a viewing area behind the station though – and while the fence makes it difficult for big cameras to get photos, small cameras should be fine.

There are limited views from Campden Street – but obscured by steel retaining bars – and you need a step ladder to see over the wall.

One potentially excellent vantage point with a step ladder — and probably only on the last trip on the 2nd Sunday when the steam train is facing westwards — is on Kensington Place just behind Notting Hill Gate station with a view direct into the station. 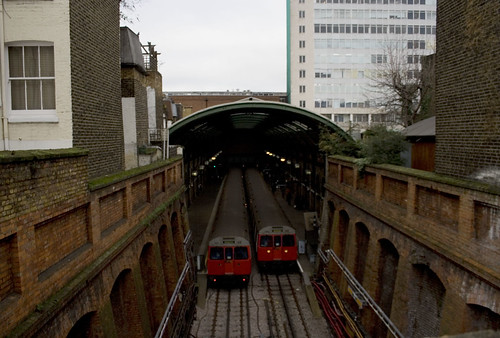 Apart from within the station which is fairly spacious, there are two locations just behind it which offer good vantage points.

Right behind the station is Poplar Place, which has a small TfL staff car park, and behind the cars is enough space for a step-ladder to peer over the wall.

Further along is Bark Place, another nicely quiet side street where a step-ladder shouldn’t cause inconvenience to other people.

The last option on this side of the route before it goes entirely underground is also quite famous in tube-lore.

This is another step-ladder required opportunity that can be found on Porchester Terrace. The view is obscured by steel supporting beams, but it is also the back of the famous fake-buildings on Leinster Terrace, so historically apt for photos of a steam train. 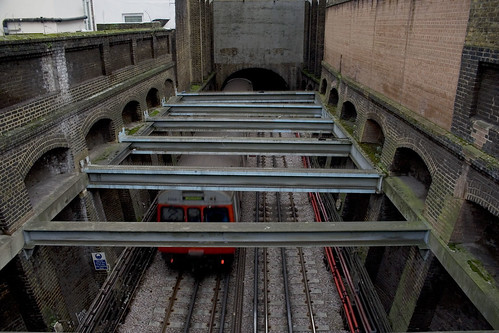 This is underground all the way – with the exception of Edgware Road, where photos from the overhead footbridge could be an option. It is however a busy interchange now, so might be best to avoid that one.

I suspect most people will want photos at Baker Street, but Gt Portland Street is aesthetically not that different. Euston Square is ugly, and quiet, so might be good choice to avoid the worst of the crowds!

The line runs mainly in open-air cuttings along here, so while some of them are messed up with steel supports, and you are photographing down fairly deeply, the brick arches help make photos interesting.

All the venues along this route needed a step ladder.

There is a limited vantage point at St Chads facing east only as most of the views are obscured by fencing around the walls.

Around the corner is Leeke Street, which has very good views both east and west – although the remains of the old King’s Cross Thameslink station are either a bonus or curse depending on your aesthetic opinion.

Views from Britannia St.; Wicklow St.; and Swinton St. are tolerable, but somewhat obscured by steel reinforcements. Britannia Street is the better of the three as it has clear views on one side – facing westwards.

There is a clear spot on Acton Street, but it is very small, so probably not any good for photography.

Further down is Ray Street, which offers very good views facing east and has a decent amount of pavement so step-ladders shouldn’t be a nuisance. That is if they remove the dead xmas trees by then! 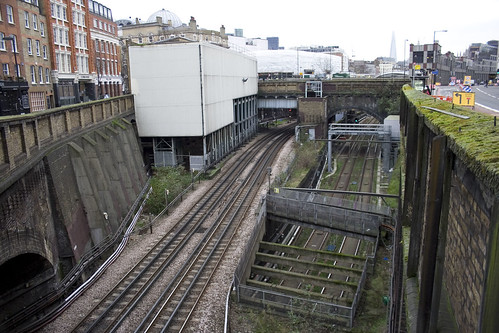 Behind Farringdon Station is Clerkenwell Road, which is a bit busy for loitering around with step-ladders, and a new footbridge somewhat limits photos, but if needs must, then it is an option.

This has the advantage of a new footbridge over the tracks – so while you are watching through glass, it is a good vantage point.

And they are getting into the spirit of things. 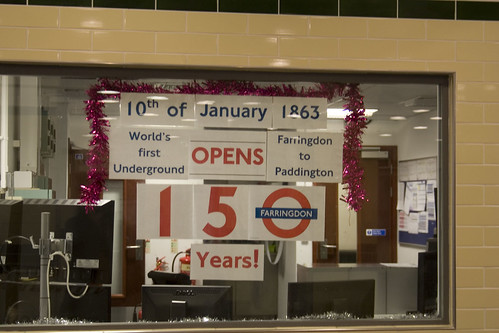 Another through-glass option is the ticket hall of the new Thameslink/Crossrail building on the other side of the road which has a very good view of the tracks leading from Barbican.

No opportunities outside stations for watching, so options will be limited to at the stations themselves.

Barbican is fairly quiet as a station, so could be a good choice. I expect Moorgate, as the destination station will be packed – not just with bystanders, but obviously the lucky passengers who were on the steam train wanting to get their own photos taken.

So that’s my tips for places to watch.

Away from the stations, I think the Tesco car park, Leeke Street, Ray Street and behind Bayswater offer the best alternative vantage points.