Tower Bridge to get a glass floor

Published on 10 December 2012 by Posted in Events and Tours, History

Being high up in the walkways above Tower Bridge when it opens for river traffic should be one of the best places to see this giant of Victorian engineering strut its stuff – but those walkways are as it turns out, about the only place that you can’t see anything happening.

Having been up there myself when the bridge opens, you can just about make out a bit of the events taking place just below your feet if you squash yourself up against the windows and peer downwards.

It is in fact one of the top laments from visitors, that people were in the walkway and missed the sight of the bridge opening – but from 2014 that is to change.

Last week approval was granted for 6 sheets of glass to be sliced into the walkway floor so that people up there can look down as the bridge swings up – getting a pigeon-eyes view of the mechanical motion below.

In about a year’s time, three narrow 24-foot long slots will be sliced into the floor of each of the two walkways, and thick slabs of (one-way) glass inserted. The slots are narrow enough for vertigo sufferers to walk past — and also not disfigure the bridge from underneath — but long enough so that everyone in the walkway has a bit of glass to peer through when the bridge does its thing.

This is the latest in a number of upgrades the Bridge has received recently, such as the new lighting along its exterior and during the summer, the huge Olympic rings dangling down from the walkway. Not to forget its presence during the Olympic ceremonies.

I still think the venue would be a better location for the New Years fireworks, as there is more viewing space than around the Embankment/London Eye, and it draws crowds away from the crowded west-end. But that is just my personal opinion. 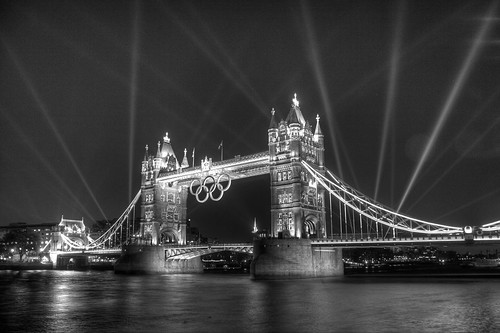 The bridge also has, quite literally, hidden depths.

Deep underneath each of the two towers sits two vast empty rooms, in which is is usually safe to stand, and on occasions, a deadly location — for this empty space absorbs the massive counterweights that swing down when the bridge is opened.

Open to the public during special engineering tours, getting down there involves a visit to a restored original control room (with toilet in the wooden seat) and down into the pumping room. 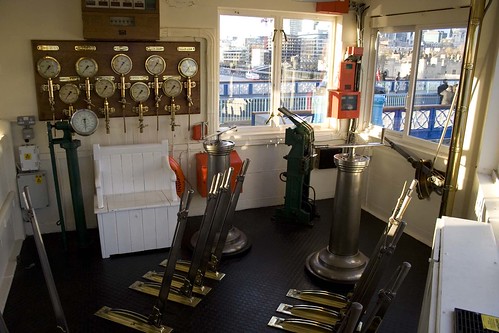 Down here the original Victorian hydraulic engines remain, but in the 1970s were replaced as functional equipment by a much smaller pieces of modern machinery.

The original Victorian system was ingenious. Steam engines can deliver a lot of steady energy, but not really the sort of bursts of sudden energy needed to quickly open and close the bridge. 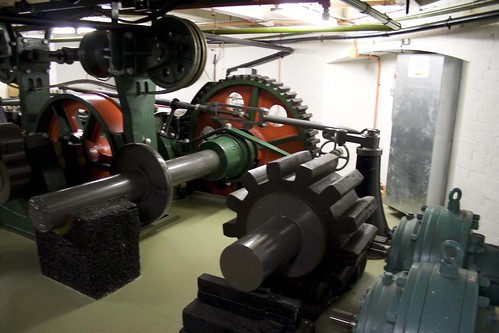 So, the original steam engines would pump water into the tower, where six 100-ton weights sat, and slowly push them up a shaft. When the bridge needed to be opened, one of the weights would basically be dropped, and that falling weight then pumped water around the Tower to spins wheels and drive the mighty drawdridge upwards. 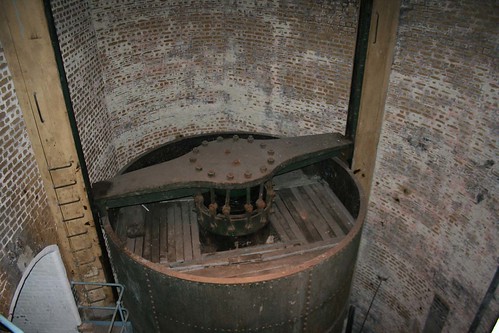 Although still powered by hydraulics, the old accumulators are no longer in use, and some still still sit down in the bowels of the tower. There is a speculative plan to restore one to working action – and maybe show people how it would have worked.

Even further down though, and though a narrow brick tunnel comes the cathedral space that seems larger than the tower can hold – a Victorian Tardis of epic proportions. 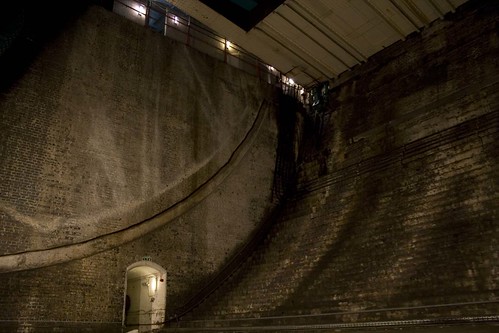 Ominous rumblings above of the road traffic give an eerie sound to the empty chamber and make it feel more industrial than it might otherwise sense if in total silence.

A quadrant of brickwork, the steps allow engineers to walk up the structure to inspect it. No one knows what the curved slots in the walls are for though – they are a total mystery.

If you were unfortunate enough to be in the chamber when the bridge above swung open, there is just about enough space below some of the steps to lie down and hide. But no one is allowed inside for 30 minutes before a bridge lift just in case.

Although visits to the Bascule Chambers have been possible for some years as part of a group (I organised such a visit some years ago), they are now offering them to individuals as well – as part of the engineering tours. 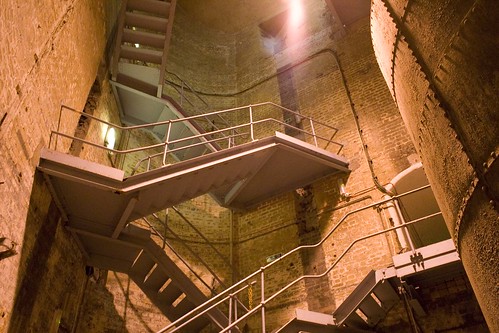 Tower Bridge is planning to put a webcam on its oft-confused namesake – London Bridge to broadcast bridge openings over the internet much as the VisitLondon webcam does at the moment.  I mentioned that they should put a webcam down in the bascule chamber as well – I think they liked the idea.

My visit was arranged by the City of London, who also took us up to the highest vantage point in the Bridge (which I have visited before), and later I was able to pilot a boat underneath the Bridge. Coupled with a turn at opening the Bridge earlier this year, I think I am Bridged-Out by now!

2 Pings/Trackbacks for "Tower Bridge to get a glass floor"