Look out for four steam trains in London this Saturday

This weekend is a good one for fans of steam trains, as there are four locomotives visiting London on Saturday – with one making a fairly rare visit to East London.

An early Christmas present to excite the kids – or please the adults who secretly still want to be kids.

The route details are below based on when they pass various train stations – and obviously, you can watch from the platforms or suitable nearby bridges and parks the trains pass through. 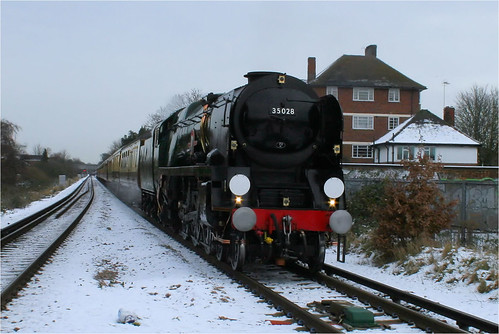 As usual with anything train related, delays can happen – I find the live departures/arrivals boards on Network Rail’s mobile website useful if a train hasn’t turned up as expected.

First up is the Cathedrals Express running from Southend to Oxford and features the UK’s newest steam locomotive, the A1 Tornado.

The steam train will run from Southend, entering London at Upminster, then looping along the London Overground line in mid to late morning, then out via Southhall. The train returns in the evening, but wont be steam hauled through London alas.

Secondly, is the Lindum Fayre which features the beautiful 60009 Union of South Africa which will leave Kings Cross in the morning and return in the evening.

Thirdly, the Orient Express will take a lunchtime trip from Victoria Station out via South-West London and return later in the afternoon.

Finally, and not an option unless you like getting up early or staying out late, a steam train spending the night at Southall will make its way down to Gatwick for a trip across to Bath.

That will be the Bath Special, and the 34067 Tangmere will pass through Kensington Olympia at 6:15am, then down through Brixton, Streatham Common and East Croydon (7:17am) then down to Three Bridges.

A rough map of the routes – as far as I am aware.