London Underground have covered up a sub-station with art

On a side street just off Edgware Road can be found a new electricity sub-station, required as part of the upgrade of the Underground for more trains and trains that are more thirsty in terms of electricity consumption.

This building has also now become a permanent work of art – or at least, it has been clad in a work of art, known appropriately as Wrapper and was created by Jacqueline Poncelet out of panels of metal covered in vitreous enamel. 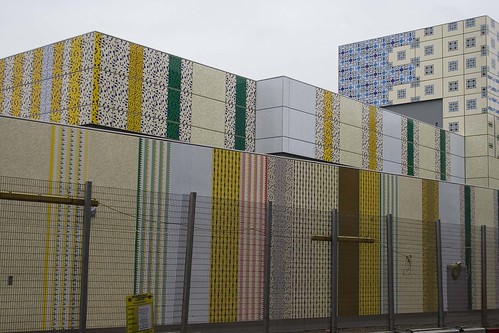 The multiple patterns that make up the design remind me of a big shelves piled up with rolls of fabric that can be be found in your local department store, although I am told that they are actually inspired by the urban landscape that surrounds Edgware Road tube station.

The stepped back design of the building fortunately helps to break up what could otherwise be a monolithic wall of colours.

The metal cladding has been installed over the past couple of months, and its formal “unveiling” was a couple of weeks ago. The metal panels were made on the Isle of Wight, by AJ Wells, using a method not dissimilar to screen printing, but using ceramic coloured inks which are then baked onto the metal.

They should last about 100 years – wear and tear permitting and is thought to be the largest work made from vitreous enamel in Europe.

Unlike most works of art commissioned by London Underground, which are designed to be seen clearly by people using the tube network, this is one that may peek above the wall of Edgware Station on the Circle Line, but is more prominent to people on the streets outside.

And then only on a side street (map link). To an extent, this is a work of art that has to be sought out – you wont see it if passing by on the other side on the very busy Marylebone Road. 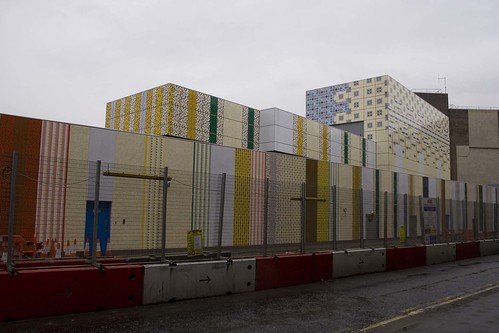 The unveiling also handed out some enamel coasters made in the same technique with a tube roundel and “wrapper” written where the station name normally resides.