Published on 21 September 2012 by Posted in Architecture

A new skyscraper is emerging on to London’s skyline which will probably become as significant a shape as the Gherkin or the Shard — the curiously nicknamed “Walkie-Talkie”.

Officially called 20 Fenchurch Street, the building is notable not just for the shape it will present when completed, but also for the roof garden that will sit above the 36th floor.

The concrete core reached its summit recently, and the steel flooring is now about halfway up, so it was a good chance to have a look around the building, and go right to the top of the concrete core.

Although the top sky garden is the most obvious aspect of the building, it is how the designer has to some degree replicated the concept of The Gherkin in having a narrow base which widens the higher you go that will have the biggest impact on people working in the area.

In a city of narrow streets, this new trend is creating pockets of quite wide pavement space, and here at least, doing so on a busy street so opening up more ground space for people hurrying past.

An idea of the amount of space created can be seen below, with the wooden hoardings marking the typical street width, and all the space behind soon to be available for pavements. In a narrow building site, the wider pavement area also helps construction, although they have still had to close off a side road for deliveries. 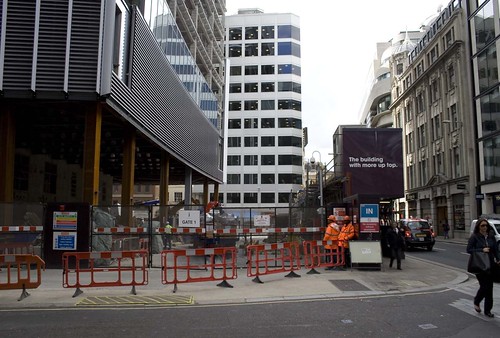 The design of the building also seems to have borrowed slightly from Canary Wharf — who are actually building it — in that there won’t be any shops running along the ground floor. This creates a unified aesthetic from the pavement to the top, without the garish distortions of retail commerce interrupting the design.

From a building use perspective, having floors that progressively enlarge as you go higher also makes it easier to rent out to tenants as they can be fitted more appropriately to the floor space they need. In fact, the floor space doubles from the smallest to the widest as you ascend.

I am still unsure about the design, which looks interesting on computer render, but as with most of these things, will look very different in reality. It is often the detailing that matters, and this has only just started to be applied to the building shell. So far, the quality looks good, unlike say The Shard, which frankly looks rather cheap and pre-fab when you get up close to it.

On this building, the white fins that run up the sides of the building are a design feature and made of lightweight aluminum. However, at the top, although they curve over the building and were originally still just a design feature, they are now to be made of steel and form the structural support for the glass roof. The advantage is that the glass roof no longer needs a separate structural support, so it should look better – and save money. 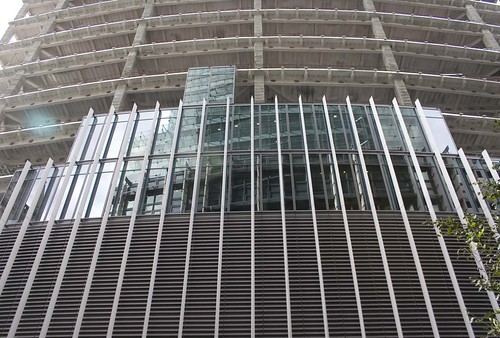 This is also to be one of London’s few buildings to use double-deck elevators. That is a money saving issue as it means you need a smaller concrete core at the center for fewer lift shafts. Less concrete, but also more floor space to rent out.

I say “the building”, when in fact it is two buildings, with a smaller anex at the rear that will contain facilities for cyclists, the backup power supplies, and two huge 20-ton lifts than can take lorries down into the basement for deliveries.

A walk up to the 4th floor, which is one of the floors currently being fitted with glass windows and made watertight for internal fit-out. It is also here that we catch a ride on the lift that clings on to the outside of the building to take us up to the 26th floor. The external lift can’t go any higher than that as the curvature of the building overhangs and blocks the scaffolding at that point. 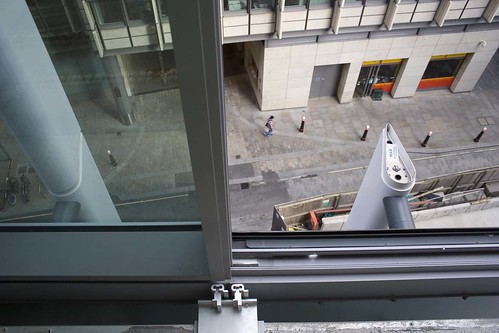 Up here, I was doing fairly well at peering over the edge to look down until Matt from The Londonist observed that thanks to how the building widens as it rises, we are not looking down a sheer face, but actually overhanging the sides of the building. Thanks for that! 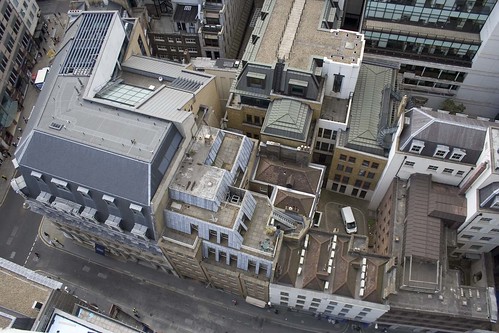 Thanks to the building being set away from the main city cluster, you get quite a good view around London, and even the side facing the city cluster is fairly decent as you see more of the cluster and are not looking across the road at someone else’s office. 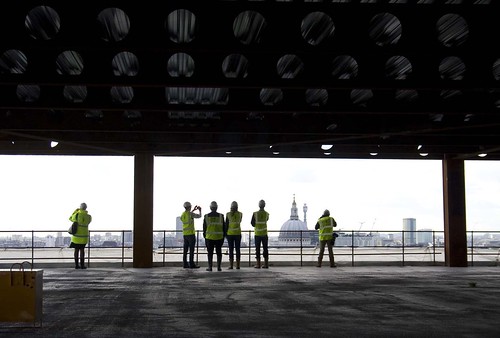 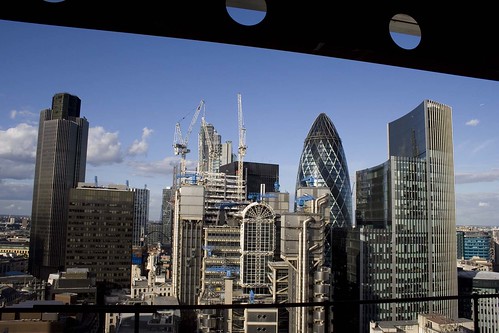 This is petty much as high as the steel flooring has reached now, so to go higher needed a more rough and ready hoist, which is fortunately mounted inside a lift shaft – and grumbled its way to the top of the building – what will be floor 36 when finished.

A mesh fence around the edges made some photography difficult unless you were willing to climb a ladder up some more scaffolding from which it was possible to see the view looking westwards. 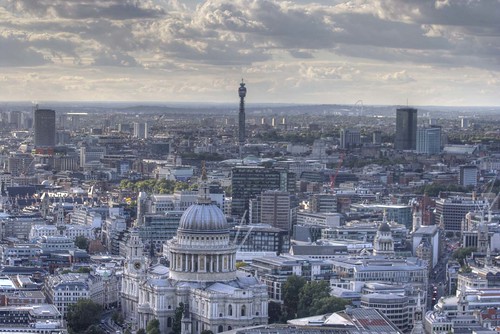 Eventually, above us will sit the “sky garden”, or whatever it ends up being called. This will contain a restaurant for the building tenants, and the intention is that it will be open the public. Realistically, open to the public probably meaning, if you want to pay top-price for a meal as opposed to just wandering up for a look – but that is down to the eventual management company to decide.

They hope to open that in the middle of 2014 though, so not too long to find out.

Before that happens though, they need to remove the three cranes sitting on top of the concrete core. Two are easy, but they are having to order a “climbing derrick” to dismantle the last one. The cranes had to sit on the core itself as there isn’t enough space around the building at ground level for them. 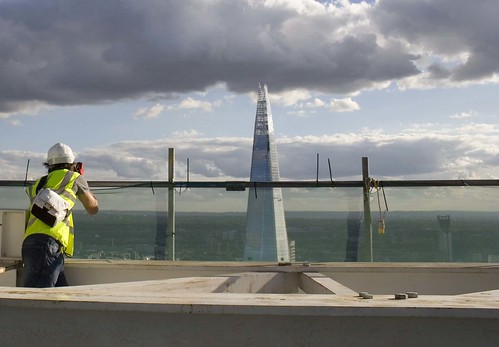 Despite the recession, the building is already 19% pre-let, and with some 10 million sq-ft of London office space leases due for renewal between 2014-16, the company expects to fill up with companies seeking more modern office facilities.

And it can be presumed that a lot of the freshly emptied buildings will trigger the next wave of fresh skyscrapers for London.

The site visit to 20 Fenchurch Street was arranged thanks to Land Securities and Canary Wharf Contractors.

A full set of 40 photos can be found over here.