Posted on 24 July 2012 by Posted in Transport News, Underground London

A short walk from Canning Town tube and DLR station two vast holes have been dug into the ground by Crossrail, and in the not too distant future, one is to be filled back in again.

These are access shafts that are 44 metres deep and are needed to let the Tunnel Boring Machines (TBM) get down far enough into the ground to do their thing. Ordinarily, the TBMs drill down from the surface along a gentle slope, but at this location that is not just not possible, but actually undesirable for the venue (map link).

So they dig a big hole in the ground and lower the TBM down to the bottom and send it off horizontally from there.

However, the TBM is about 150 metres long, so they are digging two big holes, and will link them up with a short tunnel at the bottom, and the TBM will be assembled underground, ready to head towards central London later this year. 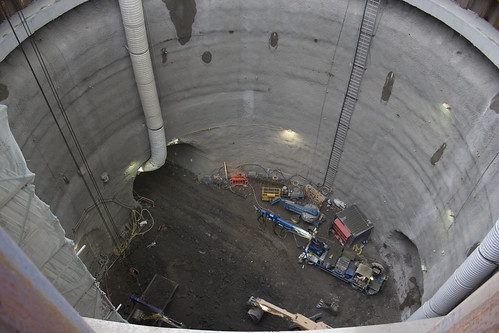 One shaft will remain as an emergency escape route, but the other will simply be filled back in again as it serves absolutely no purpose once the TBM’s have done their digging work.

The shafts were newsworthy recently when the remains of old shipbuilding docks were discovered as they dug down. The docks being also the founders of the West Ham football club.

Last Friday was a chance to have a look around the site as the two wide shafts have now reached their bottom and the joining tunnels are now being constructed.

The auxiliary shaft was dug by driving down sheet steel piles and digging out the soil, then they dug down further spraying concrete on the walls to stop them from collapsing. Being a deep hole with limited ventilation at the bottom, large fan machines cycle air through the site. 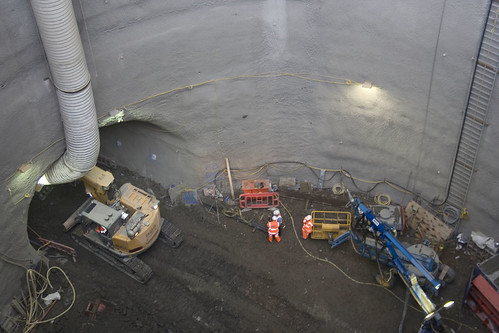 Elsewhere on the site, the TBM nicknamed “Elizabeth” has been delivered from Germany in pieces and the main cutting head is now being put back together again. This November one of the UK’s largest cranes will arrive on site and will lift this giant machine up and over to the other shaft where it will be lowered down to face Central London.

The rest of the TBM will be assembled behind it and end up poking out the back of the auxiliary shaft we just looked down at. 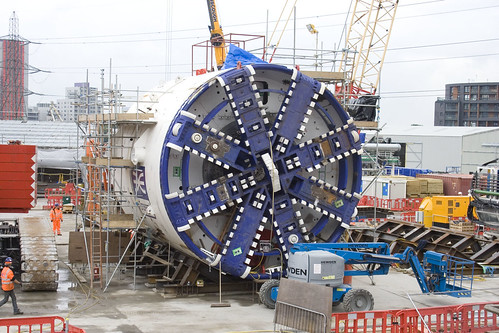 This map may offer an insight into the relationship between the two shafts. The map is aligned with east to the top, so the “bottom” shaft is at the Western end of the peninsula, and will be the permanent shaft. The other is the temporary one, which will vanish in a couple of years time. 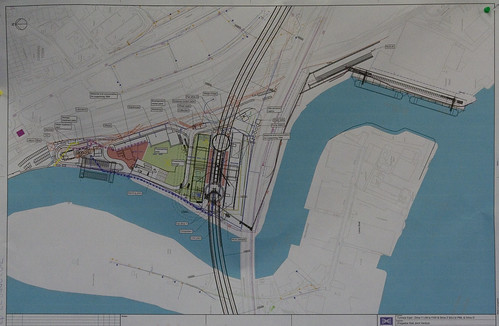 The small black lines you can see at the “top” of the drawing in the river is a docking point for barges. When the TBM is working, the waste soil will come out of these shafts and then carried away by river to the RSBP site in Wallasea Island where is being used to create a nature reserve.

Other barges will also return laden with the concrete rings that will line the tunnels. Some 15,000 rings will be needed by this part of the project, and each ring is made of 7 segments. The factory is at Chatham, and mirrors the one I visited in North London.

Inching around the site – the 30-metre wide main shaft is substantially more robust in construction methods. A planning application document has a side view of how the main shaft will look when finished. 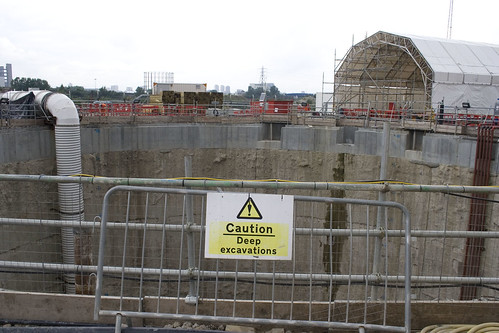 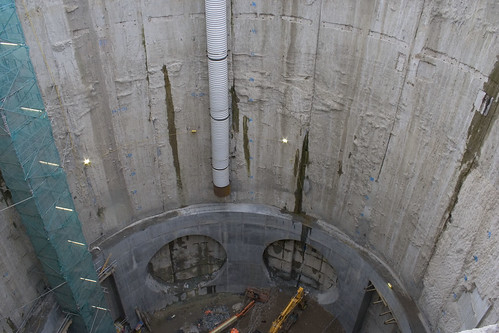 Ever wondered how you get down to the bottom of a deep shaft? Well, one way is to walk down a very long flight of scaffolding stairs, but that also means a very long walk up again. Not ideal. So the preferred method of transport is a box on the end of a crane. 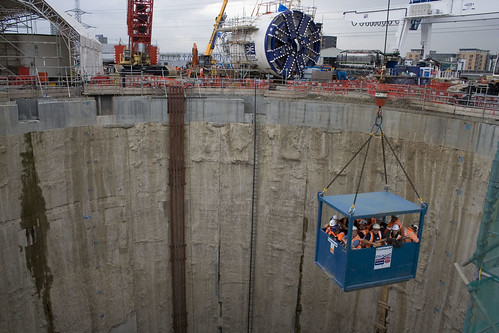 As it happened, we took the stairs down as the “lift” was busy, but came back up by crane/box/chain.

The concrete wall at the bottom is currently being drilled out to create the “eyes” that the TBMs will line up. The concrete wall of the shaft is too hard for the TBM to drill through on its own, so the concrete will be removed in slabs then the wall reinforced with a skin of thin spraycrete to hold the clay back until the TBM starts churning through the soil. 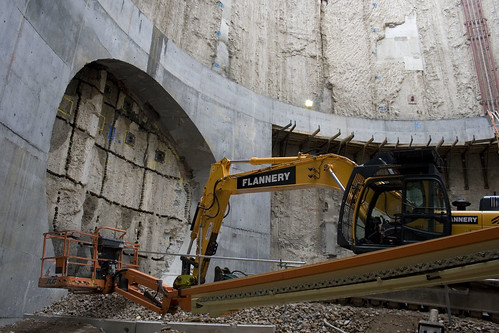 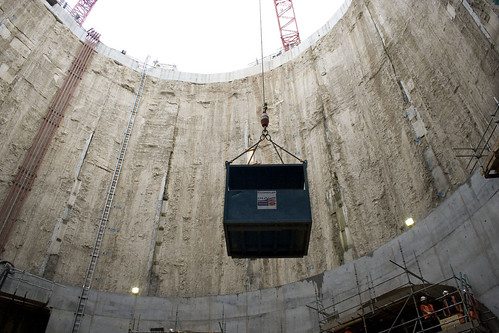 Over 250 people are now working at the Limmo Peninsula site with that number expected to peak at around 500 people at the height of construction.

Crossrail’s eastern tunnels will run for 5.2 miles from Docklands to Farringdon where they will join with the western tunnels from Paddington. The TBMs will then be reused to dig eastwards as well to link up with the Connaught Tunnel works.