A look around Southwark Cathedral

London has three four Cathedrals, and while two – St Paul’s and Westminster — are famous, (And it seems, a fourth one I have never even heard of) Southwark has always seemed to me to be a bit overlooked, which is a pity as it is considerably more accessible and just as delightful to look at.

Millions of people will pass it every year as it sits somewhat uncomfortably right next to a major railway viaduct that looks down on it as it passes toward Charing Cross. Squashed in on one side by the river and the other by Borough Market, it looks from the outside to be just a largish town church.

And in fact, that is what it was until just over a hundred years ago – when it was finally upgraded to Cathedral status.

Unlike its more famous cousins, entry to Southwark Cathedral is completely free of charge, subject to your moral code offering a donation. Also unlike the other two, they allow photography, for a mere £2 permit.

The layout is a conventional cruciform design, with a grand nave leading up to the altar. For maximum impact, you enter by the rear of the Cathedral, which invites a moment to stare along the length of the building. The interior seems deceptively large compared to what you might expect from its squashed exterior.

However, the best view is from the other end, right next to the altar. I must admit to not wanting to linger and admire the view as it feels odd to be “blocking” the view of the altar for those who are there to use the building for its more conventional purpose. 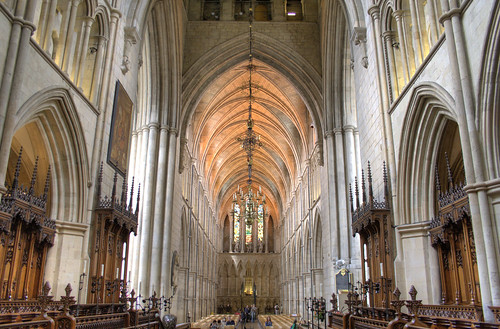 A series of chapels sit behind the main altar, and a side chapel offers more privacy. As with all churches, the walls are covered in memorials, some grand and some small, and as a large church of considerable antiquity, there are some impressive carved coffins within. 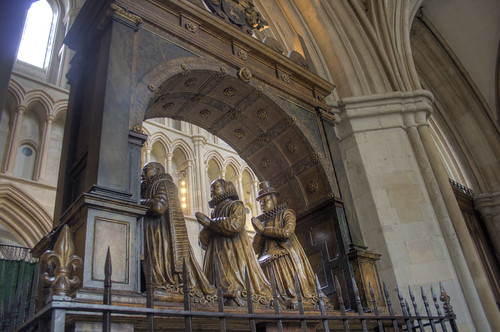 It’s possibly therefore a bit of a shock to see a memorial restored to how it probably looked originally. Imagine the entire building like that. 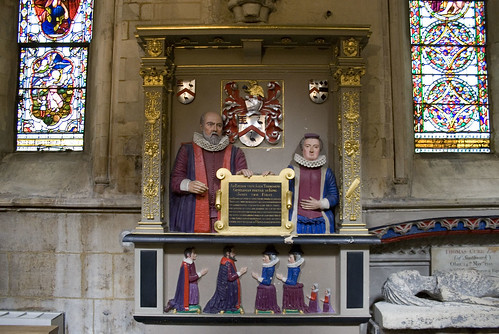 Another memorial exists, although more to celebrate a local hero than a local burial – that of William Shakespeare, along with a fresh quill. Although Shakespeare would have used a quill with the barbs stripped off. The fully feathered quill is a modern image. 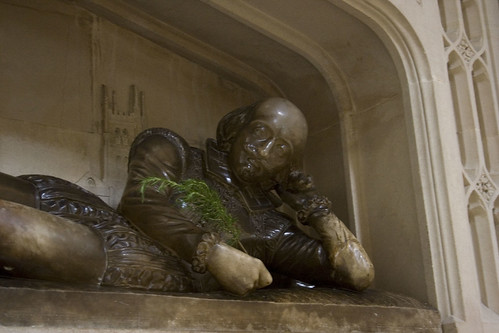 The Cathedral building can be dated to the 12th century, although damaged in a couple of fires and was largely restored in the Victorian times. The stonework is exquisite and the statues in the altar, although now plain, really helps to set off the gilt statue of Jesus and the Virgin below. 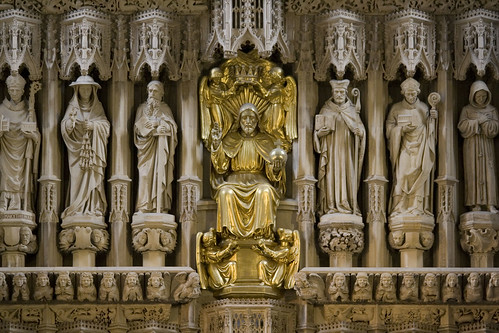 If you want a dose of high Christian architecture without the somewhat prohibitive cost of entry to the other Cathedrals, this is worth a visit. And Borough market can offer a culinary alternative to the modern cafe the Cathedral offers.

Every half hour, one of the clergy asks visitors to stop a moment and contemplate, while he reads out a short service. Some people bowed in religious observation, while others walk around unconcerned by such matters, which always slightly irks me as I think it is polite to stand still for a moment while other people use the building for its official function.

It’s only a couple of minutes, and regardless of religious affection, it is nice to sit and relax and think about relaxing for a while.

The building is next to London Bridge and open usual Church hours. Entry is free with a suggested donation of £4. A few more photos here. 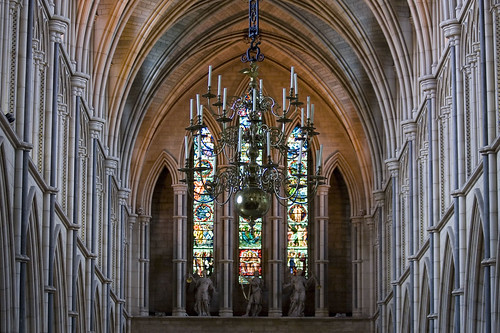