Posted on 27 June 2012 by Posted in Transport News

Tomorrow lunchtime in what is bound to be a media frenzy, Boris will take a trip across the Thames in his beloved Cable Car, some of the media will love it, and some will loathe it – with their decision probably being more based on politics than genuine reviews of the end product.

The cost per trip is high, the cost of building it nearly tripled, the amount of branding for the sponsor has been controversial, and its very location has caused head-scratching as to its purpose.

However, it is there now, and much of it is looking very shiny and new and frankly, damn exciting — but today was the last chance to see it as a building site before the last of the wooden covers are removed overnight to reveal the shiny new thing.

People arriving at North Greenwich via the Jubilee Line might initially not suspect anything has happened until they leave platform level, at which point every inch of advertising space has been handed over to the Cable Car, its sponsor and the Mayor. 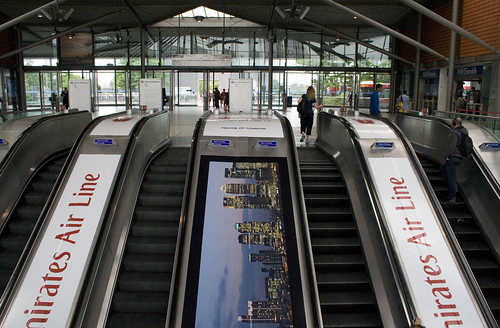 All the exit signs within the tube station have been adjusted to include notices to the Cable Car, but curiously once at the surface level, the bus station which is also a TfL property is absent of any indication that the Cable Car exists.

Although it is possible to see the cable car pods doing their thing from the tube station exit, once you leave there is absolutely no indication of which way to follow to get to the terminus building. Some new street signs — sadly not the same design as the rest of London — are being installed today, and the fussy detailing on them notes the Cable car but without highlighting it.

This is after all private land, and the owners would probably prefer your tourist dollars to be spent on their walkway over the Dome instead.

At the terminus, once you’ve found it, a hive of last-minute activity is taking place. Wooden hoardings were being quite literally torn down as I watched — and was watched by security — while lots of lorries were arriving empty and departing with the portacabins that had housed the workers for the past year. 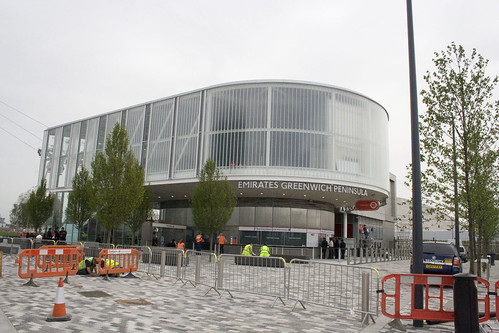 One interesting curiosity is the sign on the terminus building advertising the prices (telephoto lenses have their uses!). Although this has been sold to us as something that will appeal to commuters, the prices being displayed are all the non-oyster card prices, and it is only a small footnote at the bottom that advises that there is a 25% discount for Oyster cardholders.

To me that strongly suggests that the average person using the service is not expected to have an Oyster card on them. 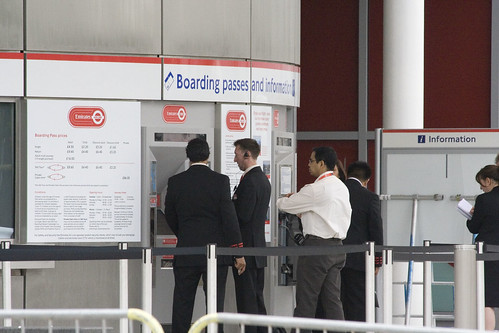 The approach from North Greenwich or river will be pristine tomorrow, but the sides will still be a former building site in need of a makeover. Well, some of the riverside will be, a lot of it is still closed off.

Although tomorrow is the official open day, some people are already using the Cable Car to get across – although limited to construction and TfL staff by the looks of things. 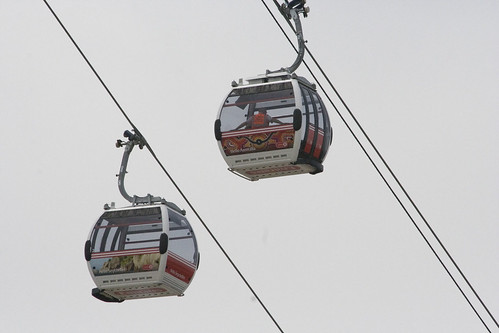 One aspect that is not noticeable unless you think about it is how quiet, indeed, silent the whole thing is. Apart from the building site works that is. Once they have gone, as a potential transport option, its silence will be presumably blessed by local residents on both sides of the river. 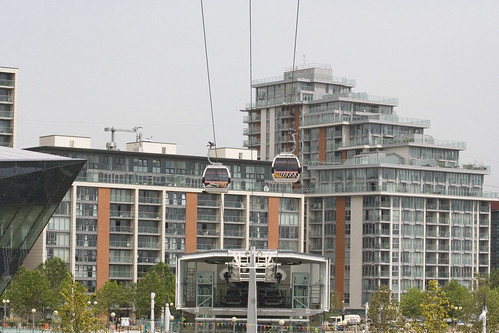 For the last time as someone who wanted to get from one side of the river at that point to the docks on the other, I took the tube and DLR to get to Royal Victoria station.

This DLR station has recently had a bit of a makeover on the Cable Car/London-bound side with a new entrance and ticket machines. However, despite the small signs saying which side of the station to leave by to get to the Cable Car, once you leave the station there isn’t a single hint of which direction to take to get to said venue.

Logically following the road does take you to the closest road crossing around the corner to get to the Cable Car, but the lack of signage this close to the launch is disturbing.

I can only hope that TfL’s notorious “sticker fairy” is out and about overnight covering bare walls with not quite horizontal stickers pointing to the Cable Car.

As with its southern counterpart, lots of last minute activity as the weighty blocks holding back wooden hoardings are lain down for removal and people finish off attaching hand rails to stairways. 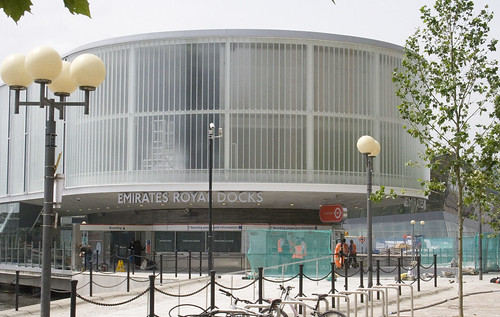 More staff testing out the pods, which I was told are rated for 10 people, but to my mind look comfortably full with six and probably genuinely full with eight people in them. 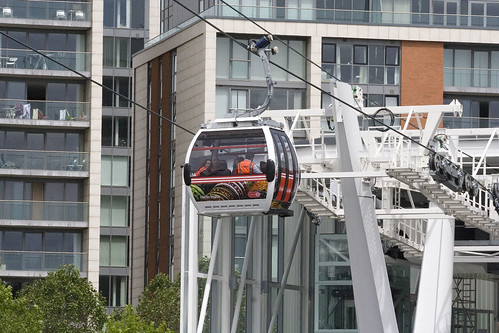 It is also here that I saw two station style roundel columns which are a good hybrid of DLR sign and central London walking map signs. Odd that there weren’t any outside the other terminus building. Or maybe they are late?

I still think the terminus buildings have a bit of a cheap feel to them with the plastic-looking walls and very utilitarian finish to the rest of the buildings. Which is a marked contrast to the pylons, which I think are exceptionally elegant and delightful to look at. Their cost has soared to controversial levels, although knowing that the foundations go down almost as deep as the pylons soar upwards does soothe my concerns a little about why it cost so much. 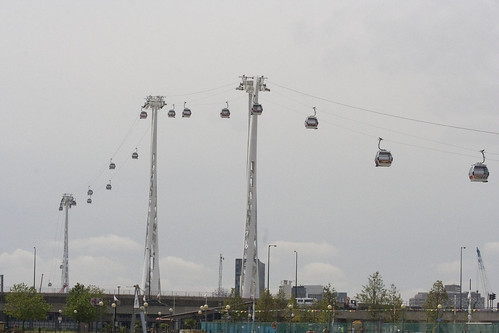 As I was taking photos, a couple wandered over to ask if it was open yet, and were visibly disappointed to be told they were a day early. Boris will be fervently hoping they are the first of millions who will be equally keen to use the cable car.

I was a day early to use it myself, which made this sign seem quite amusing. 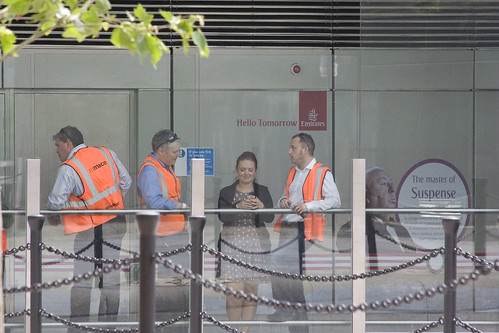 Elsewhere, back at Canning Town, which is the main DLR/Jubilee junction in the area, a cable car logo has been stuck on the tube map. I wonder why they didn’t update the very old DLR sign underneath while they were at it. 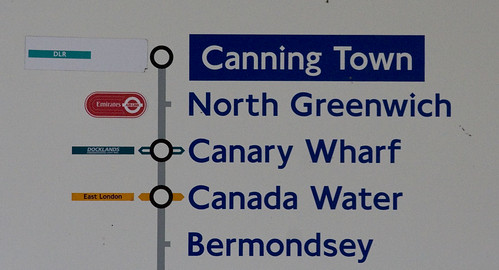 A full set of photos is here.