Published on 21 June 2012 by Posted in Transport News

Earlier today, a historic train movement took place as the first – and probably last – ever passenger train ran through a tunnel that runs under part of Northfleet, next to Gravesend to take guest to the inauguration of a site that will be used to dispose of the clay dug up from under London by Crossrail.

It also happened to be — very briefly — the site of a Doctor Who filming location. More about that below.

The new venue is the site of the former Lafarge/Blue Circle cement works, which were founded in 1846 and at their height were reputed to be the largest cement factory in Europe. The site finally closed in 2008 and will be redeveloped as a mixed-use aggregates harbour, houses etc.

There is a largish chalk outcrop between the cement factory and the mainline railway, but it wasn’t until 1928 that an – as it happened – little used rail link was installed. In 1968-70, a loop rail line was installed going onto the site through one tunnel around the site and back through another tunnel (map).

It was the redevelopment plans that resulted in the restoration of a railway to service the planned harbour for aggregates, but this low priority project jumped up the radar when Crossrail got involved.

The tunnel boring machines that recently started drilling under London at Paddington will dig out the equivalent of 50,000 lorries worth of London clay. One plan to reuse the Post Office Railway to take the soil away was swiftly dropped in favour of carting it away by railway around the South of London and over to Gravesend. Here the spoil will be loaded onto barges and taken to Wallasea Island, where it is being used by the RSPB to create a wildlife reserve.

To mark the completion of the works to restore the railway line through the tunnel, the involved companies involved chartered a train to take guests on a trip to the site. The newish locomotive hauling us from Victoria was also to be given a name — which coincidentally turned out to be Crossrail — when it arrived.

Despite being a private train, enough information about the unusual train movement had leaked out that there was usually at least one photographer at each station we passed through, and in some places, evidently professional video crews were observed.

Passing to the north of Ebsfleet International station, and shunting sideways onto new track that ran under the mainline and into the entry cuttings, and as the train curved around it was possible to see the portal to the tunnel. 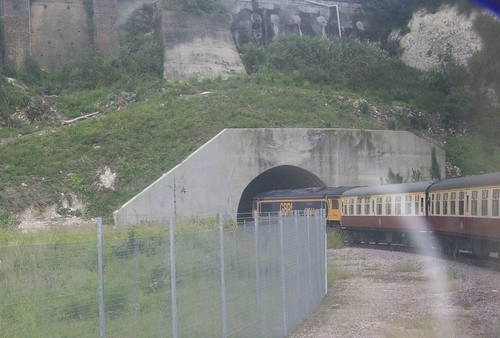 Although the tunnel is wide enough for two tracks, a stern warning not to lean out of the train on the other side as the clearance on the tunnel wall was very tight looked to be scarily accurate. 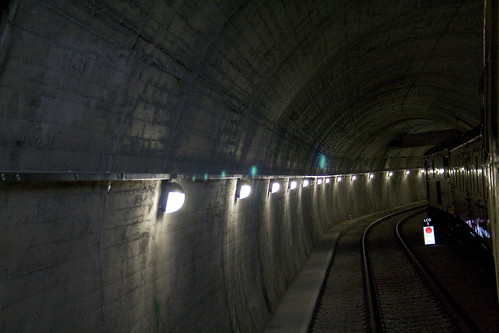 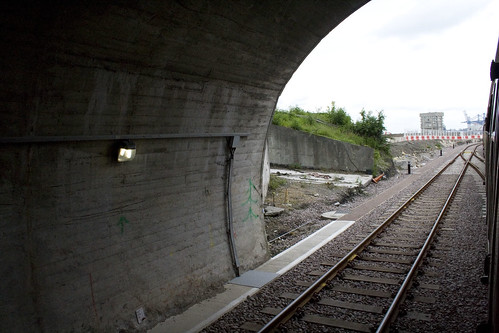 Out of the tunnel and into the currently derelict site and time for the train naming event. The train stopped short of their eventual destination where they will drop off their London clay for transport to the nature reserve. 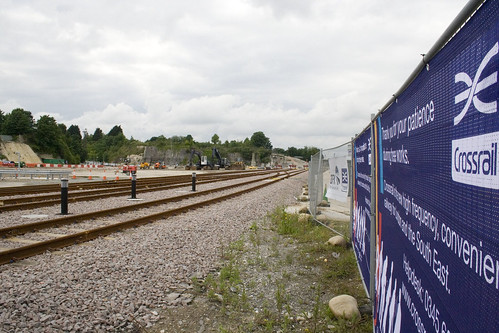 It’s rare to be able to take a passenger train over freight rail lines, so today stood out as such a rare train movement, and in a few months time, that empty railway line will be full of locomotives dropping off Crossrail spoil.

And probably no passenger trains, ever again – so we had a special commemorative train ticket handed out.

At the peak of tunnelling up to five freight trains per day will operate, carrying a total of 7,000 tonnes of earth. However, the Crossrail intervention is only a beginning for the site, and GB Railfreight will be permanently using it for hauling gravel and aggregates around the UK in the near future.

Crossrail and the Ambassadors of Death

Back to the Dr Who show, The Ambassadors of Death, as the approach to the other tunnel had been used as the entrance to an underground Space Centre that was visited by the Doctor and his assistant Liz Shaw, played by the recently departed Caroline John.

As an outdoor filming location, it only has a fleeting moment in the six-part serial, yet they took two days (3rd-4th Feb 1970) to film the shot of the Doctor driving his car into the underground base. But I couldn’t resist mentioning it.

Well, it is a valid part of the history of the site!