Published 10 May 2012 by By Ian Mansfield Events and Tours, History

Wellington Arch, the huge triumphal pile of stone at Hyde Park Corner has gained a tiny bookshop inside the arch itself – oh, and a new exhibition area upstairs.

I doubt many people who casually wander past the huge archway realise it is open to the public to go and stand almost at the top and get some very fine views of the local area. However, over the past few months it has been closed to the public as English Heritage replaced the large double-height room at the top with a two floor exhibition space. 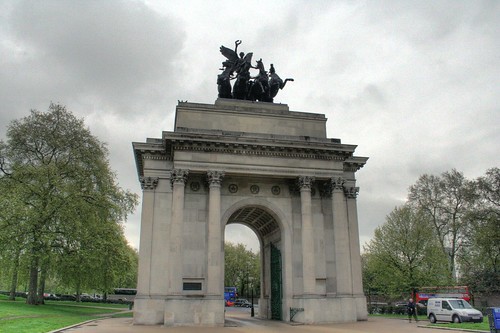 It reopened this week, with an exhibition about one of English Heritage’s other properties – Stonehenge.

Straight up to the 3rd floor via the lift  and the exhibition space is dominated by a model of Stonehenge, made from something slightly less durable than bluestones… it’s made from cork. 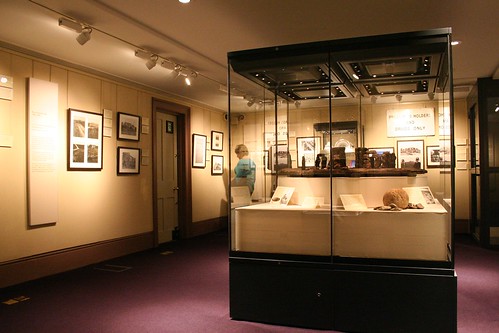 This is — fortunately I think — less an exhibition about Stonehenge itself than about the modern history of the land it sits in and the way it has been depicted in paintings and tourist tat.

A copy of the earliest known drawings of Stonehenge that dates to 1562 is on display and then the history moves along from more technical drawings to the romantic depictions done by Turner et al. The controversy when the land was sealed off with barbed wire in 1902 is looked at, and marked the time when the Stones were no longer freely available to anyone who didn’t mind walking across a muddy field.

Do expect lots of paintings and drawings, and some information about the layout of the stones and where they come from. Do not expect any unfounded speculation about celestial alignments or other religious purposes though. Leave that to the druids. 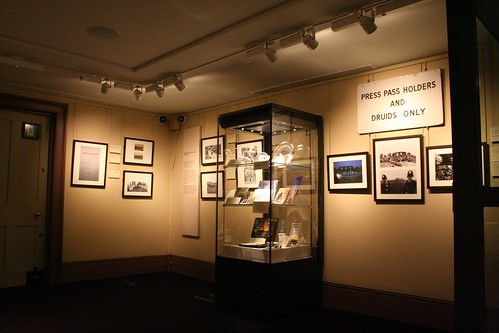 A couple of glass cases are filled with historic mementos of the site as a tourist attraction, including the very first guidebook to the stones, published in 1823. The area may have been basically, in a turnip field owned by a farmer, but it pulled in enough visitors rich enough to take time off work and travel to justify printing a guide to the place.

Upstairs is more display space, this time devoted to the planned replacement visitor centre, which has been a bone of contention for the past couple of decades, at least – and they probably want to show off the latest version to drum up support for the plans. 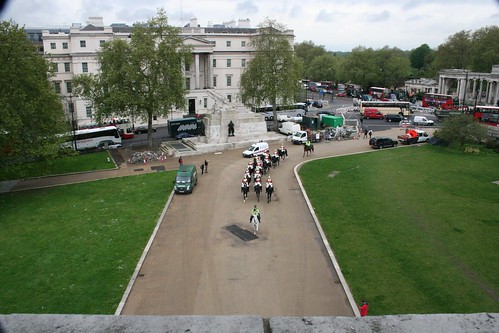 It’s up here that you can also go outside onto a walkway just underneath the monumental sculpture and watch the soldiers heading to Buckingham Palace (10:40am) or on the other side, coming back an hour later. If memory serves from my last visit, the walkway has been untouched by the building works inside.

Now that the big room inside has been split into two floors, the display about the history of Wellington Arch has moved down a couple of floors, and the stairs are delightfully vertigo inducing (or you can take the lift). 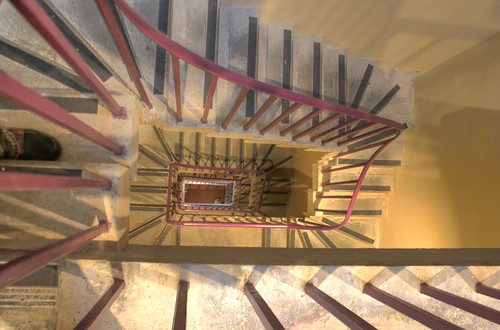 Quite a lot of space is given to the history of the hugely controversial and widely ridiculed statue of the Duke of Wellington that once stood on top, and the design for its replacement which stands there today – and was quietly unveiled 100 years ago this March. It’s apparently the largest bronze sculpture in Europe.

They also touch on the concept that great cities have Grand Entrances and some of the rejected plans for the arch at Hyde Park Corner, and how it moved from its original location to where it is today due to Victorian traffic congestion.

It was also for a while a police station, with a cat called Snooks. 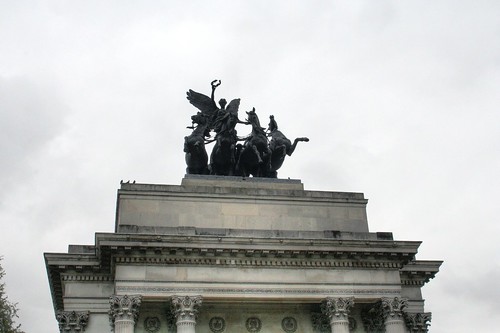 When I was last here, down in the bottom of the arch as you left the building was a generic English Heritage style gift shop, with lots of tea towels, fudge and cups for sale. That has been swept away and the space is now possibly London’s smallest dedicated bookshop.

However, it’s also quite a good bookshop as it specialises in English Heritage publications, or books about their properties. Could be quite a lure for the history bibliophile, and is a pleasant change from the usual gift-shop fare. 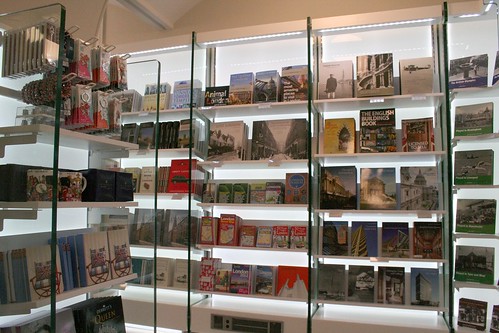 The Stonehenge exhibition is open now until 24th June (Wed-Sun 10am-5pm) and entry is £4, which I would say is quite good for the exhibition and the walkway views combined.

The Quadriga Gallery (named after the roof-top bronzes) will change displays every few months, and later this year will have displays about Blackpool Tower, Kenwood House then Egyptian style architecture in England.