Another date announced for the Cable Car’s “cable stringing event”

Posted on 26 March 2012 by Posted in Transport News

After several delays, it looks like this coming weekend will finally see the ropes strung between the Cable Car pylons. They were supposed to happen each of the past three weeks, and the Port of London Authority was putting out warning notices that the river would be closed off, only to then retract them a few days later.

They eventually said they wouldn’t issue any more notices until construction of the pylons was finished – and then there would be at least 5 days notice. Said notice has now been issued.

The plans are pretty much the same as before — albeit a month later than expected.

On Friday night/Saturday morning between 1am-5am (probably between 00:30 and 1:30am), the river will be closed to boats for a period of one hour while guide ropes are taken across the river by boat.

After that – the ropes will be lifted up to a height of about 40 metres above the river.

Then, on Sunday, between 6am and 9:30pm, the 3 messenger ropes will be used to pull cables over the river between the two towers. During this time the air draft below the cables and messenger ropes may be reduced to as low as 20 metres and there will be 3 periods of closure of 45 minutes duration during hauling operations.

I wandered over yesterday to take another look at the construction site. 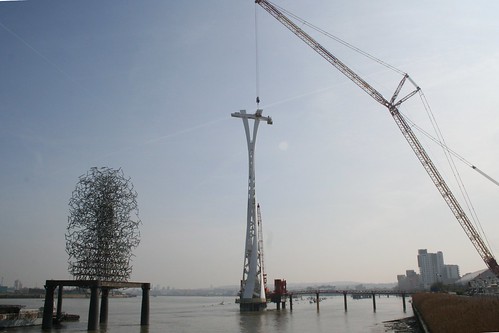 People working on the very top of the pylon. 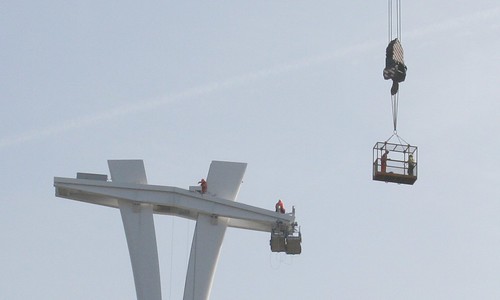 The Greenwich terminus building – there were cable car pods in the building behind this one, covered in protective wrapping. 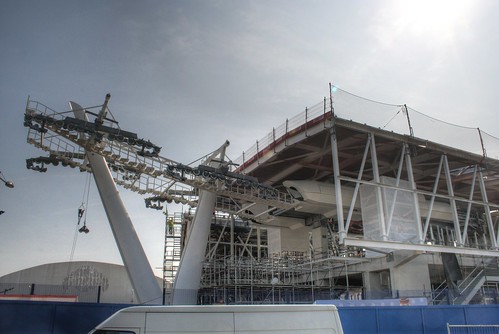 All things working out as planned, I’ll probably try to photograph the night-time exploits, as I *might* be elsewhere on the Sunday.