Another upgrade for the Jubilee Line completed

Monday should see the final stage of the long running signalling upgrade on the Jubilee Line come to completion, as the line starts running close to its theoretical peak rate.

It will peak at 32 trains per hour during the Olympics – and possibly thereafter.

To put that into context, they have gone from a train every 2.5 minutes a year ago during the peak to one every 2 minutes, which is about as close as they can get if you want to allow time for people to get on and off the trains at stations.

That’s about 6,500 extra people per hour in the morning and evening peaks – or an extra few centimetres of space in the crowded trains.

According to District Dave, the full running rate will be:

Possibly worth noting that they have to lay on nearly as many trains on a Saturday afternoon as was available during the working week rush hour a year ago. Such has been the rise in demand for the line even during off-peak hours.

Looking at the TfL journey planner – the change is visible when I look at the trains leaving during evening rush hour, for example, from Canary Wharf to Willesden Green.

Although shaving a minute or two off the journey time is almost unnoticeable, I have actually noticed a change in the trains running since the upgrade last August. The trains appear to pulse a bit as they run along, with accelerating and decelerating as the automatic train control maintains the gap between each train.

I have also noticed that my ears pop when the trains go into the tunnels at Canning Town, and occasionally through the tunnels – which they never did before the speed increase.

Actually, slightly irritating, but in a liking the fact that the network has been upgraded sort of way. 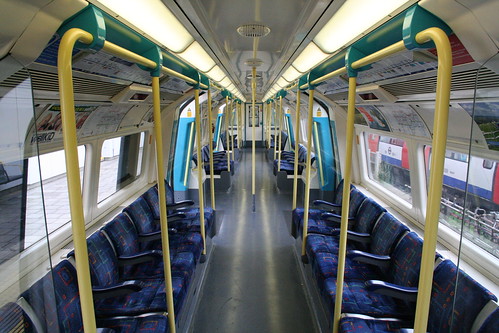 I doubt the trains will be quite this empty in the rush hour – alas.

3 comments on “Another upgrade for the Jubilee Line completed”