A look around the Vestry House Museum

Posted on 28 February 2012 by Posted in Museums, Uncategorised

Built in 1730 as a workhouse for the poor, and situated in a secluded side street sits what is today the Vestry House Museum.

Workhouses were forced labour venues for the poor at a time when the Christian admonition above the door was seen as a virtuous ideal: “if any would not work neither should he eat”.

Vestry House has since been a police station and between 1882 to 1930 it was a private house.

In 1930 Miss Demain Saunders offered the remainder of her lease of Vestry House to the Walthamstow Borough Council, and it was decided to use this historic building to house a museum. Vestry House opened to the public in 1931.

If, like me, you get slightly lost trying to find the museum, and have a mobile phone with pathetic coverage in the area, finding the museum can be very difficult. Unlike most museums, there are no small brown signs in local streets saying “this way to the museum” and being on a side street, or approached by an alley doesn’t help.

Normally I love wandering around places getting hopelessly lost, and while Walthamstow Village is a lovely area, it becomes a bit irritating if you are looking for somewhere specific. Anyway – museum located at last, with the top of a huge ionic pillar outside doing more to indicate “here be a museum” than anything I have seen at other museums recently. 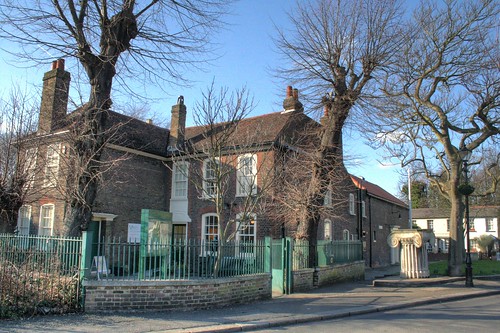 My visit was prompted by an exhibition they have on at the moment, about the East Anglian witch-hunt of 1645-47.

Some exhibitions can be brilliant, and some can be just a collection of display signs. Sadly, this is the display sign version – essentially not much more than a blog post blown up to poster size and dotted around the room with a couple of token witches brooms and a hangman gibbet.

The rest of the museum rewards a visit though.

Towards the back, which I only noticed thanks to a map of the building in the hallway sits a recreation of the prison cells that would have been in the house – although I suspect it might be overly generous in size personally.

A lovely wooden panelled room turned out to be sixteenth century, but is not native to the house as it was removed from Essex Hall during its demolition in 1933 and placed into the museum.

Some displays of clothing of the sorts that the paupers who inhabited the house originally could never have dreamt of owning filling some cases, along with a display of cameras from a local manufacturer. 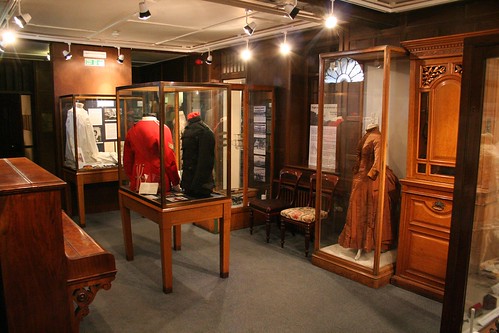 Swiftly dart through the William Morris display room which has lots of signs about their planned museum expansion plans, although the Socialist’s 10 Commandments is worth taking time to read.

Beyond the room devoted to a man who wanted to restore a rural idyll of manual labour is a display dedicated to a machine whose manufacturing developments would in time help to destroy it – an early motor car. Possibly the first in the UK, although that it contested, it is housed in a glass box to stop people touching it, and the reflections from which on a sunny day made it impossible to photograph.

Upstairs has been laid out with examples of how people lived in “ye olde times”, with a dimly lit Victorian parlour at the top of the stairs behind a glass wall.

A side room with small boxes – behind glass of course – shows the sorts of toys that people might have played with 50-100 years ago. Although small steps are in the room so children can see the displays, I just can’t see them exciting children as it looks too sterile and protected to capture their attention. 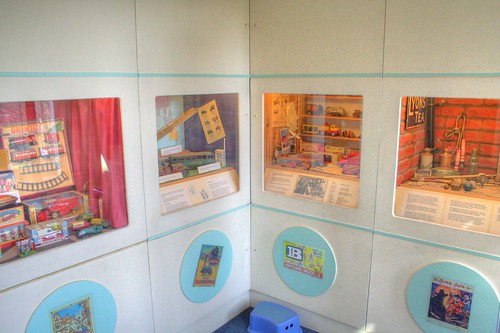 It’s the main room up here that was far more interesting, with two large display cases of the sorts of household implements that any Victorian household would have been familiar with – and an example 1940s room than any Victorian would have never understood. 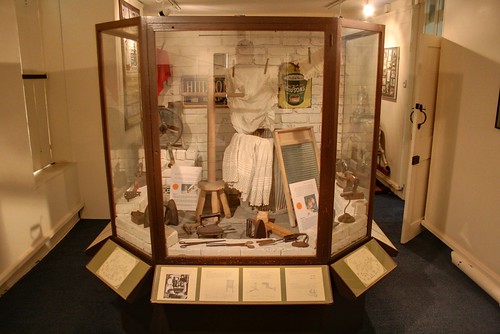 It is undeniably a very odd museum with a strange mix of displays mixed around more it seems on the space available than any sort of theme or timeline. Which is oddly pleasant, but the signage could do with being reprinted as I struggled to read the typewritten notes.

The garden has been recently relaid out as it would have been, as a vegetable garden for the residents, and a modern extension with a community room was in use for what sounded like some sort of school lesson. The local cat seemed to appreciate the company. 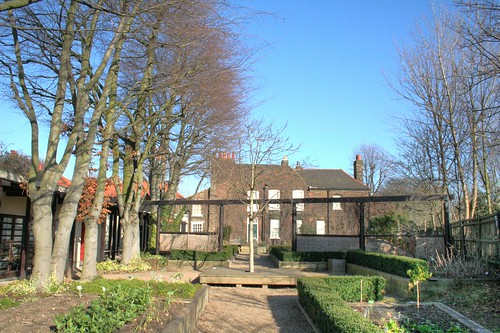 The museum is free to visit and is open Wednesday-Sunday, 10am-5pm. A small gift shop has a few booklets of local history and lots of William Morris related gifts.

I was leaving just as a screaming child was running around the Witch Hunt exhibition.