Cables for the Cable Car to arrive next month

Update – they missed the deadline, twice. New dates amended below.

In what is bound to be a bit of a media feast, the cables for the cable car will be strung between the tall helical pylons in just a few weeks time.

To my mind, the tall pylons although comparatively close to each other are isolated and singular entities, and it will be the thin and almost inconspicuous cables that (literally) tie the whole structure together. 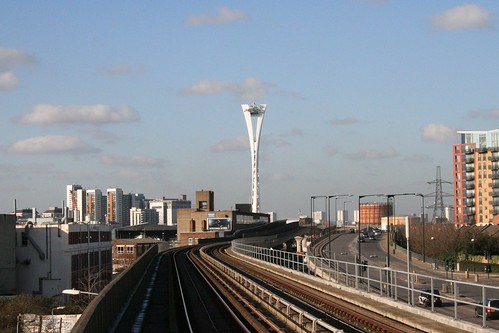 According to a notice from the Port of London Authority, the works will take place over the weekend of the 10th and 11th 17th-18th 24-25th March 2012. Weather permitting of course. If weather does not permit – then shift everything to the following weekend, and repeat until the weather gods relent.

On Saturday morning, at some point between 1am-5am (but likely to be 2-3am), the river will be closed to traffic and the preliminary “messenger ropes” will be taken across the river by tug.

A total of three messenger ropes will be taken across, and lifted to a height of 40 metres and clamped off, which is expected to be completed by 5am on the Saturday morning.

On Sunday – between 6am-7pm, the 3 messenger ropes will be used to pull the main cables over the river between the two towers.

By 7pm, the cables should be tensioned to a minimum clearance of 40m above height of tide and thereafter will continue to be tensioned to achieve 55.1 metres above mean sea level by 6pm on Monday 12th 19th 26th March.

So, Tuesday morning should be the first chance to see the cable car structures in their full “glory” and just waiting for the ground stations to be finished and little red pods to start drifting across the river.

You never know, this might actually arrive before the Olympics.

In related information – there will be additional heavy lift equipment at North Greenwich from this Sunday onwards for the erection of the final pylon. Lifting operations will be limited to between 9:30pm and 6am hours on account of restrictions by London City Airport.