Posted on 11 January 2012 by Posted in History, Transport News

The train reputedly ran through a now bricked up tunnel to a private platform by the hospital. Other claims suggest there is an underground pedestrian tunnel linking Whitechapel Station to the hospital, and this was used as a morgue before being sealed up – and is still there unused (and presumably empty).

When hearing stories about the transport network, often not much more than an oft-repeated claim with no formal documentation, I get curious.

Lets start with the pedestrian tunnel.

Think about it logically. The railway was a private company and would only build such a tunnel if it either felt it would improve the chances of a person using the railway, or was ordered to as a condition of getting permission to build a railway.

As the East London Line crossed the land owned at the time by the Hospital, it had to pay a princely sum for the permission to dig its cut/cover tunnels.

Even though the hospital is directly opposite the station, it is possible that the Hospital might want a tunnel to link the two buildings.

But there are problems.

Firstly, due to the position of the platforms/tracks, such a tunnel at platform level could only be possible on the northbound platform. Secondly, the Hospital’s main entrance is on an elevated ground floor, so the hospital end would need a person to go up three flights of stairs to get to the reception. Not easy for an ill person to achieve.

Then there is the additional cost – not just the construction, but you need to have staff down in the tunnel checking tickets.

Also, people leaving the hospital would arrive back – theoretically — at the northbound platform — when most traffic would be southbound. This necessitates going up two flights of steps, over the tracks, and back down again. Might as well just cross the road and save the hassle!

I also can’t find any record of the tunnel existing – not in the early plans, the parliamentary acts granting planning permission – not even in recent Crossrail surveys of the area.

Finally, and most damningly – there’s another railway line running between the two buildings – so unless the tunnel ducked down a flight of steps at the station (and four flights at the hospital!), your patients would be walking across a railway track.

OK, that tunnel is highly unlikely, but what about that other tunnel I mentioned.

Well, that is St Mary’s Curve, a recently disused short stretch of track that linked the East London Line with the District Line. Although used for passenger traffic for a while, it spent most of its life providing a way for Metropolitan Line trains to get to/from the East London Line.

You can see the line in the diagram below as a faint curve under the hospital (click for larger). 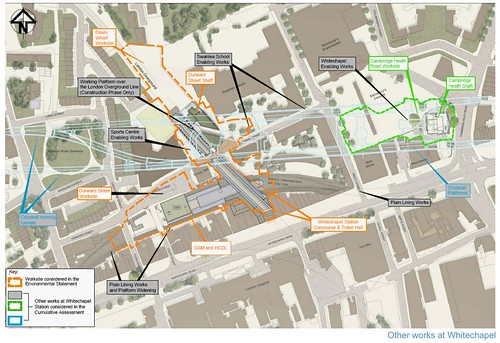 The tunnel is fairly narrow though, and only one train can use it at a time – but could a train have stopped there and collected bodies from the Hospital?

But was there any need for a train to carry away the dead in the first place? Well, at the time being talked about, a private hospital would have had to cover the cost of burying paupers itself and it is possible that the Hospital would have used what is today the East London Line to carry the dead to South London. That said, most of the patients would have been local, so it might have been more appropriate to bury them in the East End, not south of the river.

The difficulty with St Mary’s Curve is that it doesn’t really line up with the Hospital’s service buildings, unless they had a tunnel at their end – and they have no records of such a facility at the Hospital.

Chatting to the curator at the Hospital museum (well worth a visit), he confirmed that they have had many people come in and ask about the mysterious train and tunnels. He also confirmed that if such facilities ever existed, all records were expunged in a way that didn’t happen to any other records in their archive.

However, adding to the possibility that the dead body train could be real though is the fact that the East London Line itself ran right next to the mortuary building round near the eastern side so transferring bodies from morgue to train would be convenient.

Then again, the location of tracks and mortuary are a convenient coincidence, so while not impossible, we should be careful of turning coincidence into proven facts. Also, there is a brand new building on the site, and they didn’t find anything when demolishing the old buildings.

Did the train exist?

I am inclined to say that it didn’t.

A lack of any documented evidence either at the Hospital or the Railway to suggest such a service ran. The lack of need for the pedestrian tunnel – not to mention that it would have to cross another railway track also suggests that the sealed doors at the station today can’t lead to that claimed tunnel.

Can I prove it didn’t exist – nope. But it doesn’t look likely.

Which is a pity, as finding “lost tunnels” is a lot more fun, but where subterranean structures are concerned, I have to accept there are vastly more myths than facts.