Today marks the 200th anniversary of the first of what was later to become known as the Ratcliff Highway murders – a still unsolved series of murders that caught the public imagination at the time.

Murders were frankly, not that uncommon at the time, but to be killed inside your own home was rare – and the scale of the slayings was exceptional.

It is possibly how the tabloid press reported the story – – in a manner possibly not that dissimilar today — printing rumours and innuendo as proven facts and in time, driving an accused man to suicide, that gave the case such a notoriety.

The facts of the matter are that on the night of Tuesday 7th December 1811, a family that owned a drapers store, Timothy Marr, his wife and child – and their shop boy, James were all killed, while a maid survived as she had been sent out to buy oysters just before the attacks.

The address of the drapers store was 29 Ratcliffe Highway, and has been given rather roughly by most records as being on the south side of the road, between Cannon Street Rd and Artichoke Hill. Another source narrows down the possible location to being on St George’s Street – which no longer exists, and the exact location would put it inside the Wapping printing press. 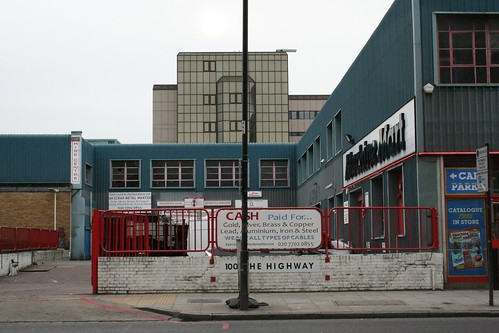 Racliffe Highway where St Georges Street once was

The particulars of the murder are well known, but suffice to say, the four were found dead by a night watchman who was called over by the maid who was having understandable problems getting someone to open the door to let her back inside.

What shocked people was the brutality of the murders, with three adults having their heads smashed in, and the baby having had its throat cut.

Its worth commenting that this all happened between 11:30pm and 1am, and the maid was out trying to buy oysters at the time – which was not an unusual request even at that hour. The image of towns closing down at night due to lack of lighting is a common myth.

Anyway, blood stains were found on the streets outside, and a local reported seeing a group of men fleeing the area.

Local pamphlets were published calling for information and witnesses, and the local church even offered a staggering £50 reward for information leading to the arrest of the murderer(s).

Although at this time, there wasn’t much of a police force in London, the murder took place close to the Wapping river police, so they lead the initial investigations, but were unable to identify a possible suspect.

Things were starting to calm down, when twelve days after the first murder, another slaying, this time of a local pub landlord, his wife and their servant.

The murders were discovered when a patrolling watchman found a lodger scrambling semi naked down knotted sheets from an upper floor and shouting that murder was being committed within the house.

The deaths all bore the same grizzly method as had been seen a couple of weeks earlier.

The pub itself, the Kings Arms was located a short walk from the drapers store, its address being given as 81 New Gravel Lane – which is now Garnet Street. The location of the pub has long since vanished, and is likely to lay where riverside warehouses were later built – and are today rather posh flats. Certainly a map of the area from about 80 years later puts a pub at around the right location. 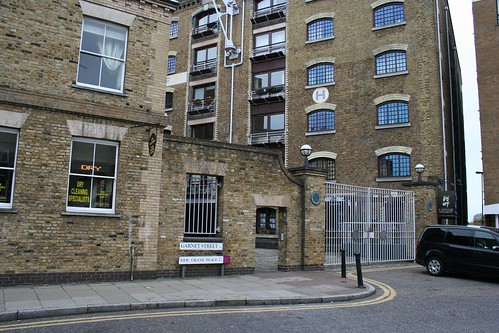 Two grotesque murders in less than a fortnight – the whole area was in uproar.

A magistrate was appointed, and in a manner that has never been fully explained, a local irregular worker, John Williams became the prime suspect, despite not matching any of the eye witness reports, and there being other suspects who on later review look far more suspicious.

The unfortunate Williams was sent to the Coldbath Fields Prison in Clerkenwell to face trial – and there he chose to commit suicide by hanging in his cell – not an insignificant achievement as cells tended to be long, narrow – but also have very high ceilings with rarely anything to hang from.

There is even a suggestion that Williams was murdered by the real villains to stop him giving evidence at the trial against them. Suicide was treated as a sin almost as serious as murder, and it is difficult to understand either why he did it, or indeed, how.

A court hearing on Christmas eve heard the evidence presented, chose to ignore most of it and concluded that Williams had to have been the murderer, and to have committed the acts alone.

The case closed, the public needed to be assured that the man was indeed dead and the threat removed.

On new years eve, his body was dragged on a cart through the streets, in a manner that used to be reserved for a man being sent to Tyburn Gallows. The ghastly spectacle stopped at the locations of the two murders

The cavalcade stopped at the junction of Cable St and Cannon Street Road, where a hole in the road was prepared for him next to the turnpike.

Accounts now differ slightly, but he was either buried head down, or on his knees, but all accounts agree that he had a stake driven through his heart – the traditional punishment for a suicide to deny them the resurrection.

There is a postscript to the story though.

In the 1960s, a gas main was being dug along Cable Street, and reportedly the bones of a man were found in the middle of the road, with a rotted wooden stake seemingly driven though his heart. The bones were removed, and the skull apparently became a keepsake of the pub on the corner of the street.

The pub has now closed down, the skull lost. 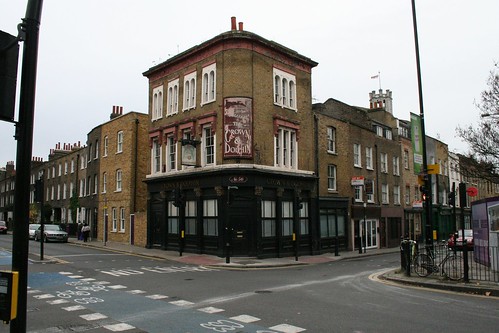 The corner of Cable St and Cannon St Rd

Two hundred years ago, the authorities driven to action by the popular penny press and public fuss alighted upon a dissolute man and persecuted him for a crime he in all probability didn’t commit.

However, just last week, the landlord wrongly arrested over Joanna Yeates’s murder told the inquiry into media ethics that the media had “shamelessly vilified” him.

200 years later, and not much has changed.

Unsurprisingly, Diamond Geezer is also marking the 200th anniversary on his blog.