The Waverley is in trouble

Posted on 25th October 2011 by Posted in History, Miscellaneous — 6 Comments ↓

Ever since I moved to a flat next to the river, my summer evenings have been enlivened by the sight of a rather pretty boat chugging past the flat at night, with a distinctive paddle-steamer sound and decoratively lit for ornamental purposes instead of flashing garishly as the party boats are wont to do.

This is the PS Waverly, the last seagoing passenger carrying paddle steamer in the world.

She was built in 1946 as a replacement for an earlier PS Waverley of 1899 that took part in the WWII war effort as a minesweeper and was sunk in 1940 while helping with the evacuation of troops from Dunkirk.

Curiously, although built to sail on a Firth of Clyde steamer route, the boat was owned by the London and North Eastern Railway, so there is a direct link with London — albeit a long distance one — in her heritage.

Each summer, the ship runs tour excursions around the UK – including a few weeks up and down the Thames.

Sadly, it turns out that this summer may have been the last time it graces the Thames with its streamlined form, as the charity that owns it is in financial trouble.

According to their official statement “We need to be able to fund the ships’ annual refits that are required to enable them to sail next year, and we do not have the money to do this.”

To be blunt, they might do better if their website wasn’t quite so erm, yeugh – but if you are inclined to help preserve a piece of UK steam heritage, then here is the place to visit. 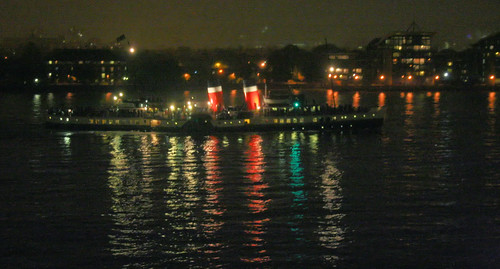 I’ve not taken a trip on the boat myself — and kept meaning to — so your donations might save my chance of a holiday sometime in the future! However, Caroline took a trip last year.

Rather cunningly, and not unlike a number of boats on the Thames, she has a totally pointless tall mast on the boat – which just coincidentally happens to be too tall to fit under Tower Bridge, and thus forces the bridge to open every time she passes through.

Which is nice for the tourists on board, if less so for motorists wanting to use the road above.