Photos – inside the disused tube station at Brompton Road

Published on 5 August 2011 by Posted in Events and Tours, Transport News

Half way between South Kensington and Knightsbridge tube stations lies an abandoned remnant of the early Piccadilly Line that was closed down in 1934 and shortly afterwards taken over by the War Office to be used as a command centre for the defence of London. 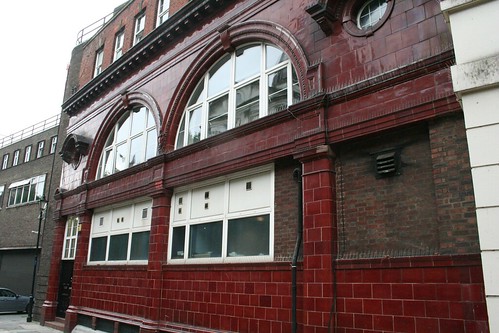 Still owned by the Ministry of Defence, and long abandoned as a functioning bunker, the site is now being eyed by Ajit Chambers’ Old London Underground Company, which is causing a bit of a commotion within transport circles as he seeks to convert some of these abandoned relics into tourist attractions.

Although most of the closed tube stations are owned by London Underground, this one is still owned by the MoD, so they had to approve a site visit by the company, and to do some filming by a German TV channel. Oh, your correspondent and the Londonist were also allowed to tag along with our cameras.

Brompton Road Station was opened on 15 December 1906, but saw little traffic and, by October 1909, some services passed it without stopping. In fact, the confusion about whether trains would stop at the station lead to a play at the Criterion Theatre in 1928 called Passing Bromton Road.

Oddly, the station almost became a major location, as a plan 1902 would have split the Piccadilly Line at that point and sent a spur down towards Stamford Bridge, necessitating the construction of more platforms and a much larger station above ground.

But that never happened, the station closed to the public, and opened to the soldiers.

The station had three lift shafts, as was normal for stations of that era, but it is worth noting that the shafts each held two huge lifts, so they are quite large – and if you put in some floors, they make excellent underground rooms. Underground rooms that during the war, were used by the Royal Artillery for the Anti-Aircraft Operations Room covering central London.

As part of the conversion from tube station to war bunker, the platforms were lowered and a wall built along the length of the platforms to protect the workers from the trains on the other side. Toilets and basic amenities were installed in the underground passages as were air filtration units and air pressure doors to protect against gas attacks.

It was from here that the gun emplacements dotted around London were coordinated as they tried to shoot down enemy planes, so quite an important location in London’s military history – albeit one that is largely forgotten now.

They also have a large meeting hall, which they are terrifically keen to hire out if anyone wants a large room for a wedding reception or meeting. The roof terrace is rather good as well. 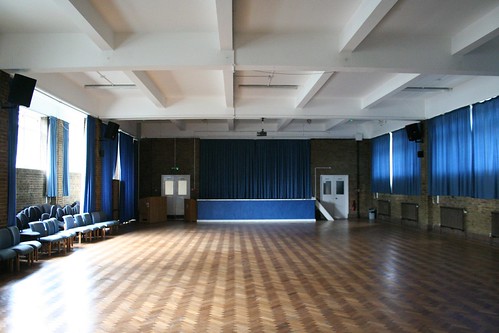 I wont show how we got down into the station, not because it is a military secret, but idiots sometimes try to break into these places – being an MoD property wont deter them – and I am not going to assist their efforts.

But down into the structure, and basic industrial facilities before getting to the original staircase that would have taken customers down from the ticket hall to the lower landing to catch a lift. 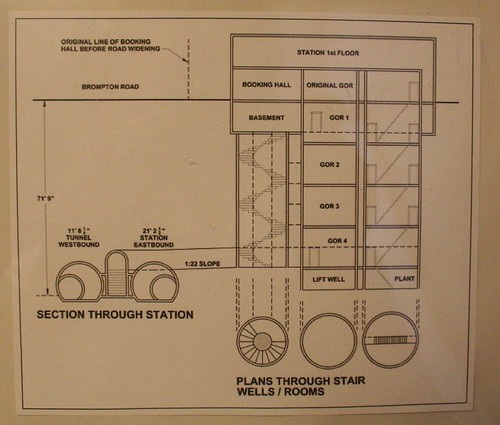 Photograph of the drawing mounted on a wall in the building. Plan originally drawn by Subterranea Britannica

As the lifts have long since vanished, we went down by stairs, and punched into the walls at various locations are doors leading to the command rooms used by the military during the war. From the noise and clatter as we walked down the stairs, the sudden silence caused by the austic cladding in some of the rooms soaking up noise was quite startling.

I wish modern day pubs used the same trick so I can hear the person standing next to me talking.

Little now remains of the war, save a single map on a wall and the ventilation ducts installed to keep the air fresh. Everything is covered in a thick layer of fine dirt, probably soot blowing up from the tube tunnels below. 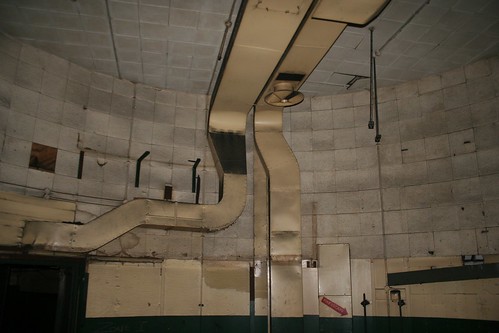 The polystyrene tiles show signs of water damage, but unlike say the bunker in Neasden, the place is generally very dry. The dry dirty atmosphere and the pitch darkness added to the air of abandonment which made it difficult to remember we were in the center of London.

Time to head further down, and anyone who had the chance to visit Aldwych station last year will be familiar with the spiral staircase with its huge ventilation pipe running down the centre. 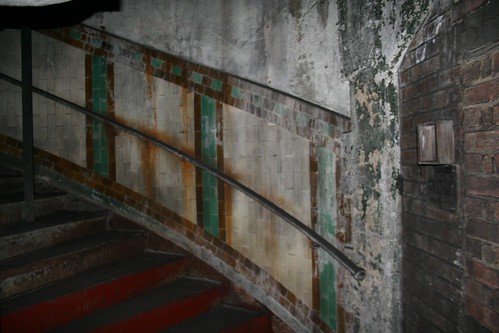 At the base is a double door, possibly a standard military bunker air pressure system for protection against gas attacks, and a cupboard which would have ammunition, but fortunately, not now. 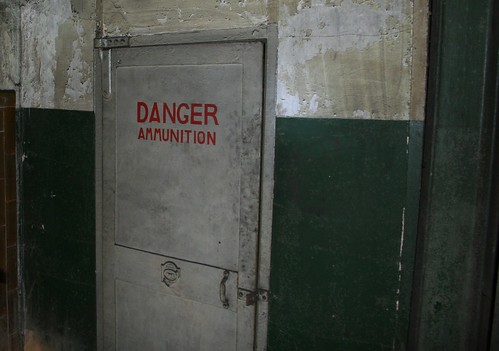 Corridors lead one way to more ventilation equipment and some air scrubbers, and the other way down to the old platforms themselves. 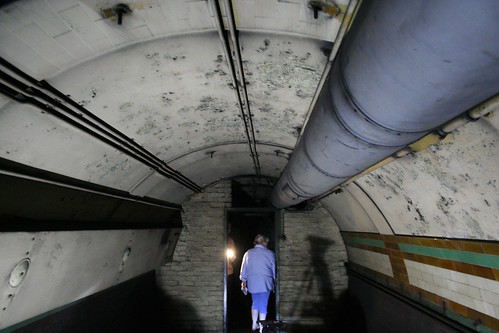 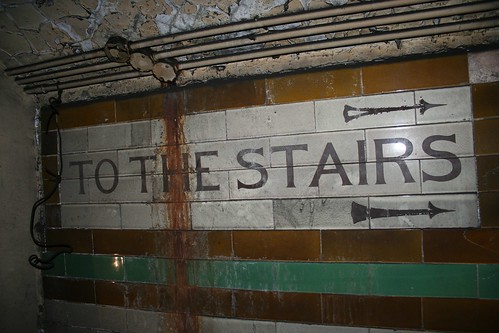 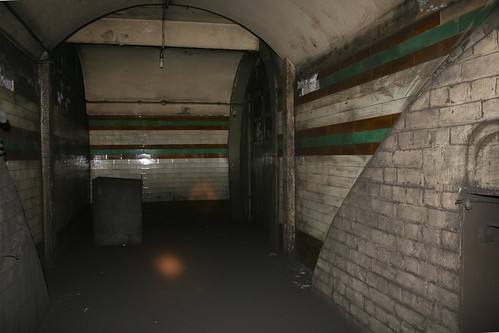 Will this make a viable tourist attraction? I think it might – it is quite a decent size facility, is close to the museums, has a good lump of WW2 military history and has sufficient tube heritage left to appeal to the transport geeks. Also, more critically, the deep level layout permits a loop for people to go in, down, around and back up a separate exit shaft – which is essential for safety.

I think – personally – that it might be more viable than Aldwych which is still in use by TfL or some of the stations further away from the West End. The “Holy Grail” would be Down Street station, but I don’t know how easy a conversion job that would be.

At the moment – obviously – the site is not open to the public, but two other military bunkers are moderately accessible – the one under RAF Uxbridge, and the reserve Cabinet War Rooms in Neasden.

Lots more photos over at my gallery here, and thanks to the Old London Underground Company for the chance to tag along during their site visit.