Published 11 July 2011 by By Ian Mansfield Events and Tours

Do you ever find that there are major attractions that you have never visited? Not because you probably won’t enjoy them, but because, well, they are always there – so in a hectic life you can always visit them next week.

But next week turns into next year, or even the next decade.

Kew Gardens is one (of many) such places for me, so it was about time to go and have a wander around the place.

Getting to Kew for the opening of the gates meant that for an hour at least, the place would be rather less busy than might be expected for a warm weekend, and like bargain hunters rushing to the China dept during the Harrods Sale, I headed directly to the treetop walkway.

It’s one of those “must see” things that many people were talking about when it opened in 2008 – the novel experience of being able to walk along a path amongst the tree tops and see them from a rather unusual angle.

If asked, I would have probably expected the walkway to be made of wood, albeit supported on metal, but I wasn’t aware that the entire structure – excepting a handrail – is metallic.

The rusting steel “trees” supporting the structure look very appealing as I approached the walkway, and warning signs that the lift is out-of-order pending replacement did not deter me although they have prompted howls of protest on Kew Garden’s website.

Being just moments after the place opened to the public, I was utterly alone and ascended the 118 steps to the top.

Half way up to the top, and my first real shock – which I suspected, but hoped wasn’t true – the floor is see through! 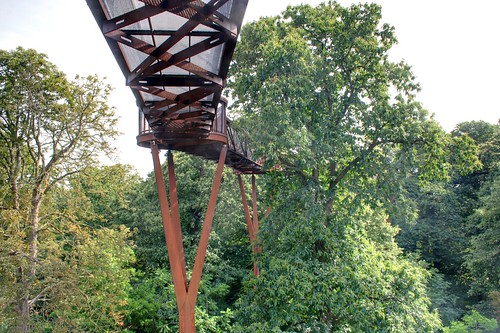 The walkway is a loop in the sky, and while I would say the much heralded chance to walk in the tree tops is a bit overblown in places, the views looking across the rest of the gardens are stunning. Having it all to myself was a nice treat, and I can certainly understand why it got so much positive commentary when it was first opened. 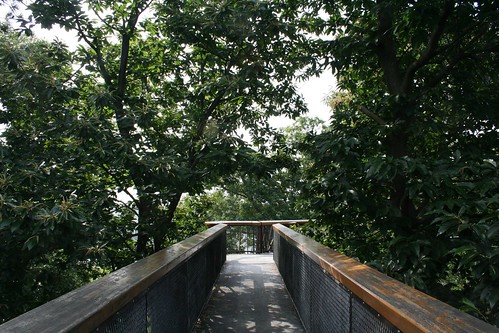 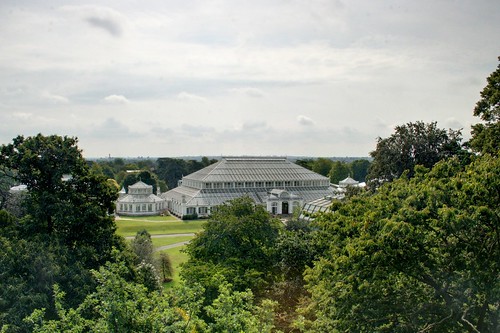 One circuit of the walkway and time to head back down – after dropping a coin into the donation bin, which then rattled all the way down to a collection box at the base of the tower. A clever acoustic trick that probably has children demanding coins from parents.

Returning to the ground level though, it’s time to see what that strange concrete slope offers, and inside, going down underground are three representations of tree roots, made from metal with displays and how tree roots work. The lights were switched off – which might have explained the barrier blocking entry as I left.

It was rather agreeably steampunk in aesthetic, and an interesting contrast to the heights experienced a few minutes earlier. 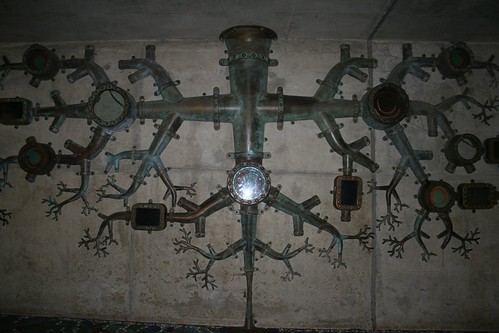 A few more photos in my gallery.