Geek Overload at the Transport Museum

What happens when you collect together 1950s comics and science magazines, acoustic modems, 5.25-inch floppy disks, a Sinclair C5 and a Commodore C64?

You have a correspondent getting misted up with nostalgia.

The Transport Museum in Covent Garden has put on a display, entitled Sense and the City which, according to the official blurb, looks at the development of technology and its integration into the – social, economic and political fabric of the city. 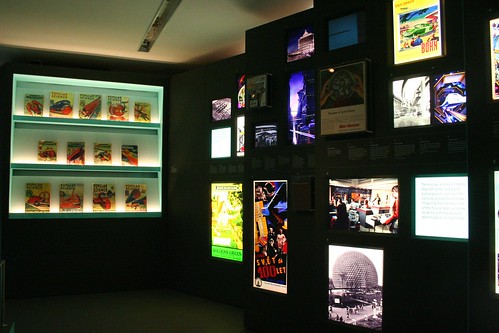 The exhibition is split into two halves, with one a display of old gadgets in cases and opposite, a wall of pictures from the past imagining what our future would be like. 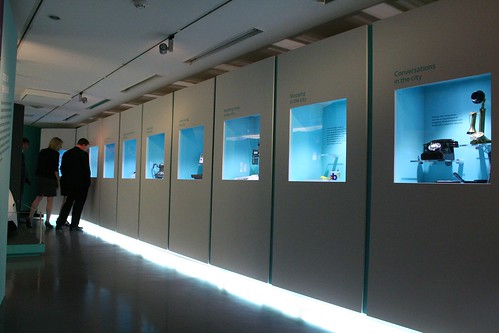 The other half being a series of touch-screen displays (that are far too sensitive) and generally looks at how information is changing how we look at the city – such as plotting the movement of taxis, twitter messages or boris bikes onto maps.

Much of the touchscreen information is stuff I have seen elsewhere before – mainly on websites showing how Open Data can be used to by people in unexpected ways to generate information we didn’t even know existed.

If you haven’t seen that before, it will probably be very interesting.

However, for me, it was the other half of the display that I found the best – the displays of old computers, gadgets and the bizarre visions of a future where everyone owns a personal helicopter and massive motorways would be built through cities, and yet were always shown with just a few cars using them.

Annie Mole of Going Underground got a bit excited to see a Dan Dare comic featuring the London Underground, and it reminded me of a guest blog post I wrote about how the Underground network appeared in Thunderbirds.

Being a transport museum, it was possibly not a total surprise to see a Sinclair C5 on display, a bit too close to the displays of “future ideas that failed” for comfort as I quite liked them, and still itch to own one. I was very tempted to climb over the rope and sit in it. Very tempted indeed. 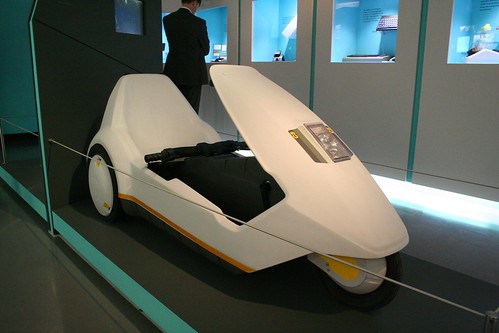 On the theme of communications, one display showed the different ways information has been transmitted over time. Not just the range from typewriter heads, an acoustic modem (sigh, nostalgia) and floppy disks, but also (slight squeal), a tube from an early hydraulic document sender.

In offices, you would put your document in the container, and then tubes running around the building would shuttle the document to the other office. The whole thing was usually powered by high pressure water pipes lain under the pavement throughout the City of London that delivered hydraulic power to the offices before electricity was common place.

Amazingly, after the death of the hydraulic power company, the pipes remained there unused until brought by a telecoms firm in the 1980s, and turned into conduits for fibre optic cables.

Victorian pipes used to send documents around buildings are still being used to day, to send emails and documents. 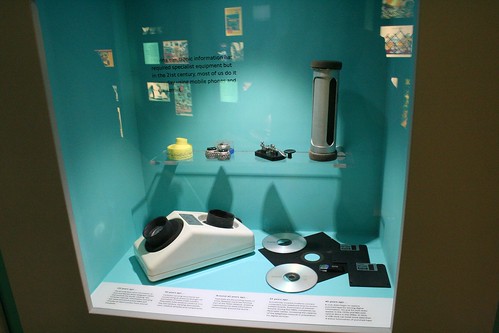 In the touchsreen room, is a wall with displays of tech-words, and their meanings. One was wrong though – really, really wrong. So wrong on a scale of wrongness that it is painful to think about it.

I leave the following below – and any decent programmer will wince when they see it. 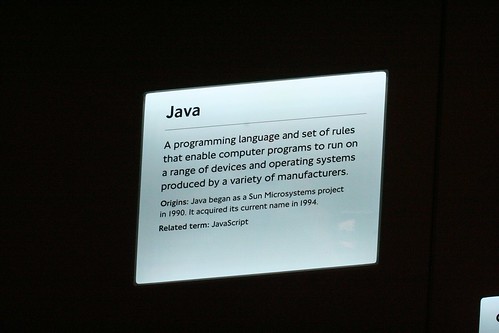 Hint: Javascript is NOT related to Java. Not even close.

Entry to the exhibition – which runs until next March – is free with the £13.50 entry to the Transport Museum, which in turn gets you unlimited return visits for a year.

As an older gadget geek, I really enjoyed it.

Finally, although I must have missed it at the display, the press photos from the Museum included a photo of the rare spiral escalator which was very sadly one of those futuristic visions that ended up being a bit of a failure, but I think needs to be rebuilt somewhere – it would be one heck of a tourist attraction. 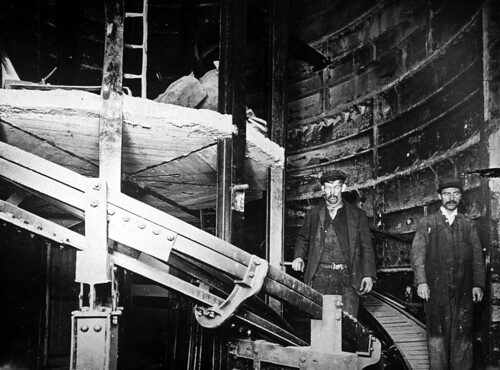