Published 30 June 2011 by By Ian Mansfield Events and Tours

London is – depending on the whim of the planners and chequebooks – about to get a new park, a long sinuous length of pedestrian walkway floating on the Thames that will contain a few pavilions, a swimming pool and rather a lot of gravel paving.

A consultation opened yesterday near where the park will end up, and it is open today as well – if you can find it.

Although called a Park, it is undeniably more of a floating pavement – for to call it a park would be to cause epistemological problems, of sufficient magnitude as to lay upon the logical and semantic resources of the English language a heavier burden than they can reasonably be expected to bear*.

I actually sort of like it as an idea, and it is suitably sited alongside a length of the northern bank of the Thames that generally lacks much in the way of pleasant walking, although a large gap appears between two sections as the City of London’s riverside waste disposal depot sits there and cannot be obstructed.

However, it is just a floating platform and lacks any striking architecturally outstanding details that would make someone instantly recognise it as a defined structure and generate that “Marmite” experience of love or loathing. If granted planning permission by the City it will be here for 5 years, but I can’t really see it garnering the sort of reaction that the London Eye got when it was hoisted into the air – and which resulted in its temporary planning permission being extended almost indefinitely.

In addition to the pavement, and a few token trees, there will also be the money making pavilions – one of which does sound appealing as it will have some form of enclosed space where you can go for a swim in the Thames. An interesting idea.

I also like the fact that as a floating platform it will rise and sink with the tides, so unlike the fixed embankment on the Southern side, the perspective will change twice daily. I just wish the design was a bit more visually exciting than just a collection of floating barges with a pavement on top. 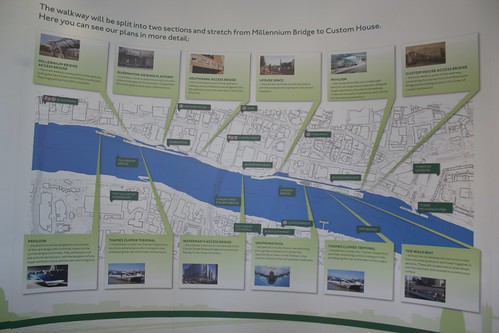 While I was at the consultation, a beardy sort was haranguing about permission to cycle along the pavement, and the advisers said it was something they were still taking advice on. I don’t object to cyclists on the floating pavement, but they should be required to sign a declaration acknowledging the primacy of the pedestrian and wont use their bells to rudely demand that the two footed walkers step aside for their velocipede enabled journeys. 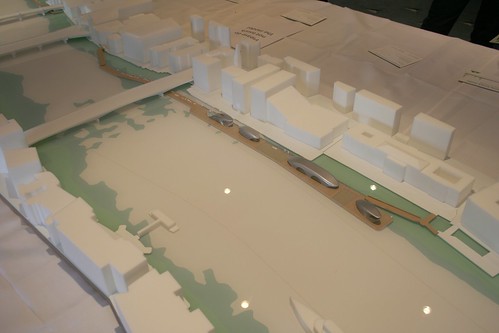 The consultation room is what you would expect for such an event, lots of big poster boards, a large model (yay!) and several people gushing about how wonderful it will be and asking you to agree via the medium of a little comment card.

The consultation is open today 1-4pm and 5-8pm at The Little Ship Club (entrance via the riverside) a few minutes from Cannon Street train station. 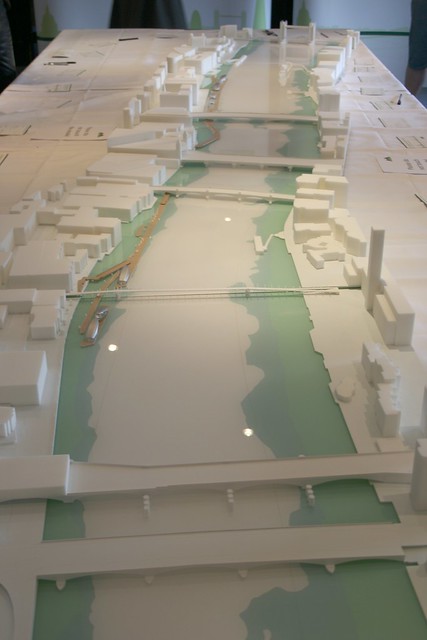