Photos from inside the Elizabeth line station at Canary Wharf

Published on 26 May 2011 by Posted in Transport News

To mark the second year of works at the Crossrail Station in Canary Wharf, a notable Minister of the Crown , and your less notable correspondent got to go down into what is still very much a building site to have a look around. 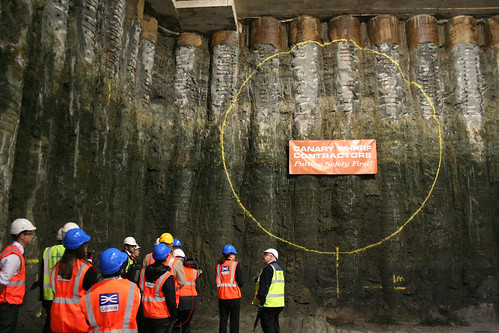 Just as the Jubilee Line station was built inside an old dock, the same can be said for Crossrail, as they have taken advantage of the site to build a station inside the watery gap between present and future skyscrapers.

Built between 1800 and 1802, the North Dock was the first of the great docks in the Isle of Dogs and although about half of it was later filled in, enough remains to accommodate what will be one of Crossrail’s largest, and almost certainly most distinctive stations.

To put the size into context – the station is about the same size as the tall Canada Water skyscraper if lain on its side. 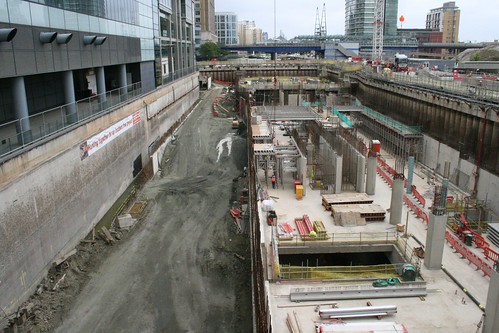 Although the dock is quite deep, it is still not quite deep enough, and the construction method to deepen it has been interesting.

As the dock was drained, it would have lost the physical support of the water holding the sides from collapsing, and to have dug out the floor of the dock as well would have weakened it too much – so they reinforced the base of the dock to form what will be the roof of the ticket hall.

After that – and after piling to reinforce the structure, they have then spent the past year effectively digging out soil from underneath the bottom of the new concrete floor to form first the ticket hall floor, then after laying another concrete slab, digging down yet again to form the vastly larger cathedral space for the trains.

In total, the bottom floor of the station will be 18 metres below the original base of the Victorian docks.

Side view of the station – when finished

The station box within the dock is being constructed and designed on behalf of Crossrail by Canary Wharf. It is being built for a fixed price of £500.3 million, of which Canary Wharf is contributing £150 million, and will pick up any extra costs.

The station is being constructed within a 470 m long concrete box with a 245 m long island platform.  This will be fitted out to 210m with the potential for extension should the need to operate longer trains arise.  A 165 m long crossover at the western end of the box will enable trains to terminate at the station and return either to central London or to Abbey Wood.

The station box is expected to be completed and handed over to Crossrail by summer 2012, ready for the arrival of the tunnel boring machines.

A couple of schematic slides from the presentation which are interesting:

After a briefing about what has happened in the past couple of years since construction started, it was time to don the uniform of a building site and descend into the bowels of the site. 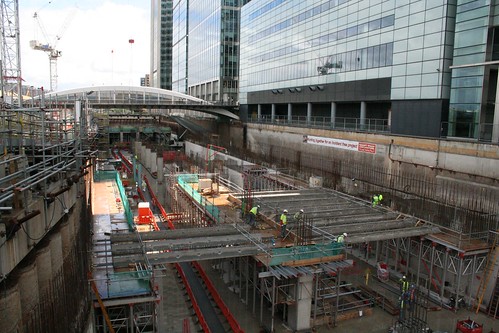 This is the “Boris Pile” – the first one driven in the ground by the Mayor to start construction work, in coincidentally Tory Blue cladding. 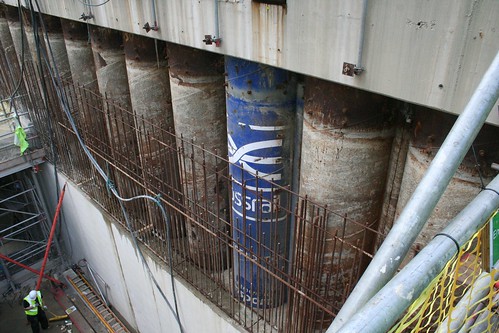 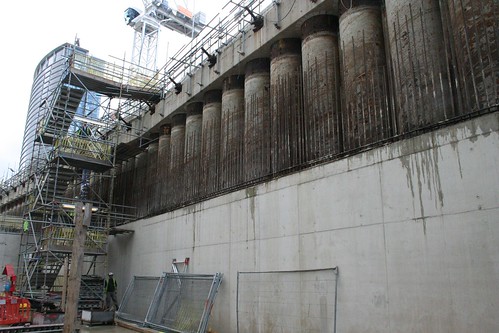 Down now below the original dock, and this is the future ticket hall and circulation area before people descend another level down to the trains. The roof you are looking at is the floor of the old dock (albeit a replacement in modern concrete). 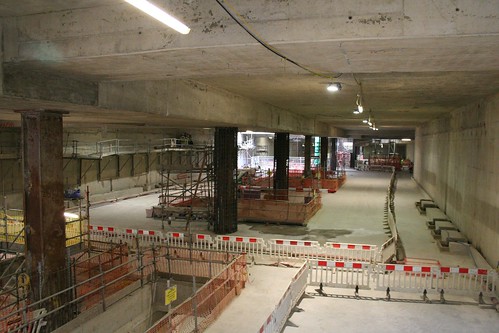 This is the very bottom of the structure, and will be where the trains eventually arrive on either side of the cavernous box. 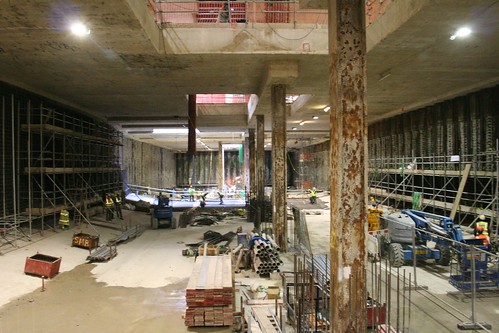 Construction work is still going on to dig out the soil – here is is Thanet Sand being removed. The sand was almost perfectly dry as the water table has been lowered to allow construction.

Eventually the water level will rise again – but it will probably take a couple of decades to return to its former state.

Should have brought a bucket and taken some authentic “crossrail sand” home! 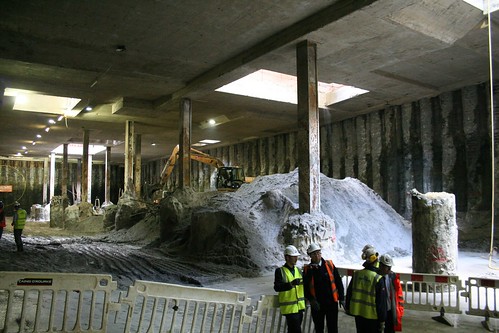 Here in the gloom is the Eastern end of the station with (for us media types) the point where the Tunnel Boring Machines will penetrate through into the station box. Not the exact location, but a close approximation of it. 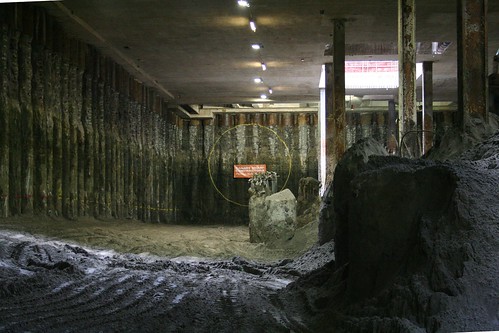 Yes, we are walking on dry sand this far down underground. 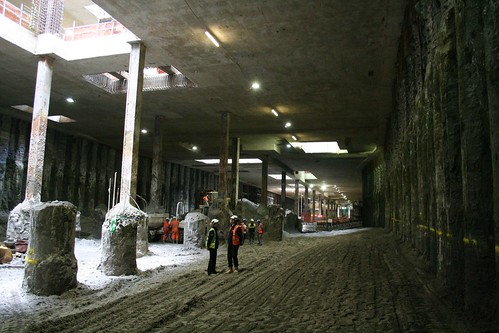 Finally, this shows – maybe – the depth of the concrete base (1.7 meters) that will be cast over the sandy soil to form the final base of the station. 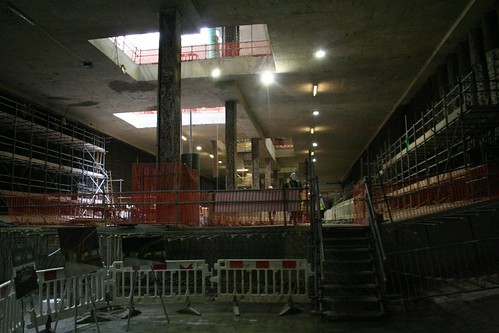 The full collection of 35 photos can be seen in my gallery – along with five very useful schematic diagrams which (if you zoom in on them) will show in detail how the construction work was carried out.