It would seem that the Shoreditch/Hoxton media posse don’t read this blog – for if they did they would have known that last night was the annual open evening at the HAC by the “silicon roundabout” and wouldn’t have been Tweeting in some panic about the explosions they could hear, the helicopter hovering menacingly overhead and the sudden sight of a man parachuting out of the helicopter. 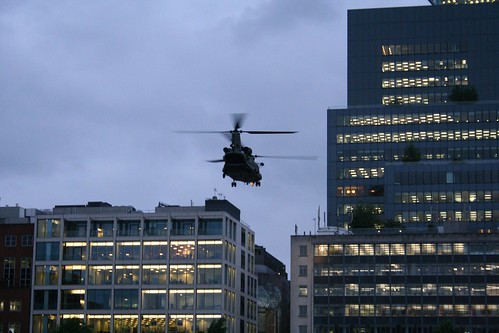 Actually, the weather was closing in by then and we had one parachutist instead of six – and he landed on the main road outside the HAC, apparently right in front of a red bus – which must have surprised the driver.

The open evening is a bit of a fixture on my calendar as it is a damn fine night out even if its main purpose is to try and lure people into joining the Territorial Army, or even go full time with the military. It also serves as a good PR exercise to let local workers inside the grounds for a look around – and to scare the cappuccino drinkers just up the road.

In fact, that the locals were surprised and worried by the event is itself a good reason to hold it – as few people seemed to realise there is a huge parade ground and army barracks right next to where they work.

As on the previous years, there was a display of old fashioned warfare with the 17th century pikemen, then a display of carriage driving over the cricket lawn and new for this year, a tug of war match, won – to the audible disgust of the officer in charge of the losers – by a winning team that included two girls. 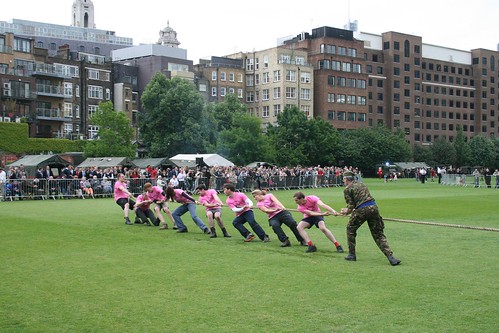 After a visit to the HQ building for a look around – and a very sharp rebuke for not taking my hat off – it was time for the main entertainment of the evening.

A recreation of a battle in South Africa against the Boers – slightly altered to allow for the cricket lawn instead of sandy soils and an audience of polite people watching from behind barriers. 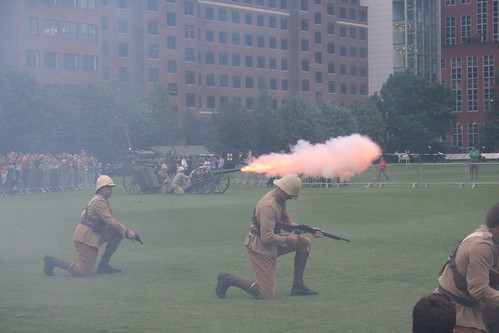 Finished off by a charge on horseback by the Union Jack to a resounding cheer. 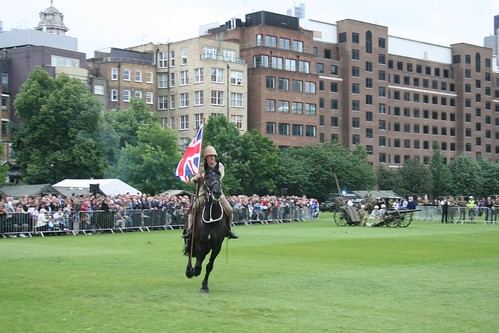 A recreation of more modern warfare followed with an attack against some Afghan insurgents with smoke flares, very loud explosions and machine gun fire to terrify the locals up the road. 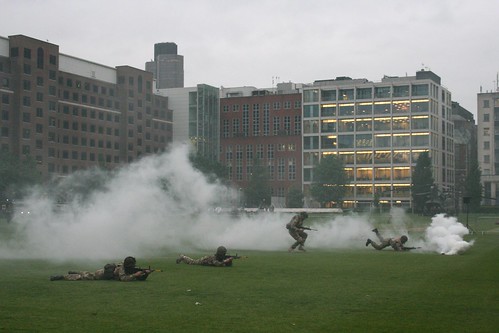 It was intended that the Chinook helicopter which had been in the grounds all evening for tours would lift off now, but Heathrow traffic control were being difficult, so a marching band played some rousing tunes to entertain.

A WPC where I was standing obliged a request to pick up some of the spent rifle cartridges and hand them to a waiting child – an action which resulted an a dozen little arms popping up and begging for more – so she spent a few minutes collecting and distributing them to excitied kiddies.

Actually, I wouldn’t have minded one myself.

Then, eventually, the helicopter was allowed to take off, and after circling a few times, a parachutist was dropped out over towards Hoxton to drift down, but the wind by now was picking up and right at the last minute he swerved to avoid hitting buildings, and as mentioned, apparently dropped down in front of a red bus outside.

A few more circles around the arena to see if the weather would clear up, but it was no go to land the rest of the men, so the drop was cancelled. Half an hour earlier and it would have been fine. 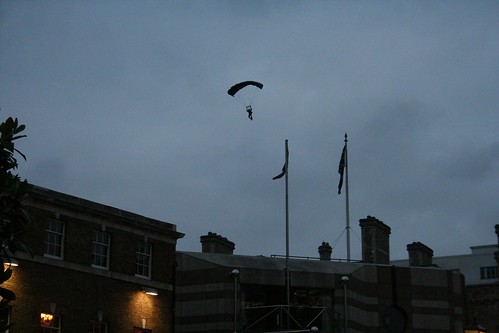 As usual, damn fine evening out – and the HAC holds monthly open evenings on the first Tuesday of every month for curious recruits, although not as spectacular as the big annual event last night.

The editor of London Reconnections was also there, and videoed the Boer rebellion being put down by the British.

7 comments on “Explosions and helicopters over Shoreditch last night”

4 Pings/Trackbacks for "Explosions and helicopters over Shoreditch last night"