This venue has become quite famous over the past few years thanks to the annual “goat race”, run on the same day as the posher boat race, and has become so popular that they now have to pre-sell tickets to control numbers. 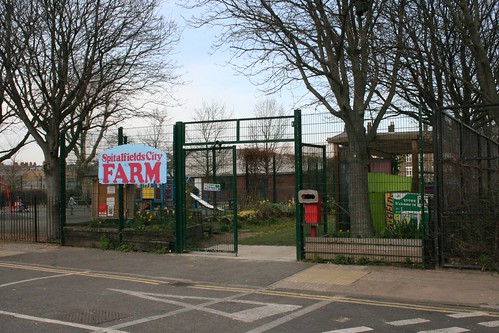 That aside, this is a slightly odd city farm in a slightly ramshackle sort of way. Going in via the main entrance on Buxton Street, the main side of the farm is to the right at the end of the pathway. Most of the farm paths are laid with cobbles which give it a distinctly county courtyard feel to the place.

A few nature reserve type areas and a huge wooden tent like structure before you get to any animals. 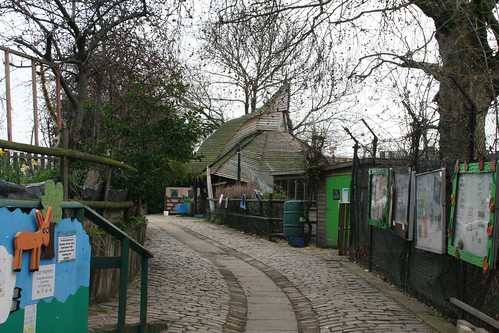 What you have is a central area with the goats and pigs, and then around it are the smaller pets and chickens, along with a couple of stables.

What you might not notice, unless you either came in via the other entrance, or investigate it is that there is a fair sized pasture area to the left of the main farm with quite a few more animals to see. I would have missed them myself if I wasn’t doing a more in-depth look around or wanted out via that exit. 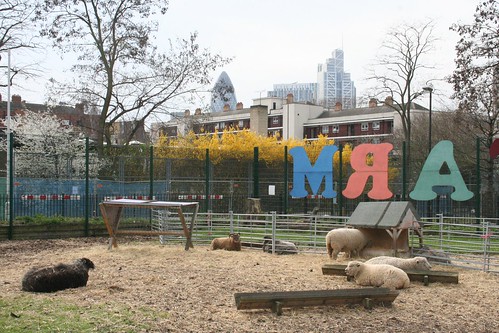 A farm in two very separate halves, with a grass pasture area a modest distance from the area most visitors would think of as the farm. The main area is very definitely aimed at children with lots of decoration and signs dotted around the place.

Some of the animals are kept securely behind chicken wire, but most of the larger animals are behind ordinary fencing, so can be touched if they are close. It is a bit cramped in places, which can make it a less enjoyable on busy days.

An old red BT telephone box has been converted into space for the animals, which is bizarre, but in a cute sort of way.

The pasture area is more like a farm and thanks to being less easy to notice, less busy.

In general, it is almost a petting zoo, but just about manages to avoid that with the range of larger animals and the other facilities they offer at the farm.

A good one to visit if you live locally.

Brick Lane is a short walk away, as is Stepney City Farm if you fancy a double-dose of farm life.