This city farm has the huge advantage of not just being slap bang in the middle of a fairly residential area, but its main entrance is right on the main road going through Hackney, so is very alluring to people just passing by.

Your correspondent actually managed to go in through the back of the farm, having somehow missed the large signs on the main road – but there was a nice tree lined walk to compensate. 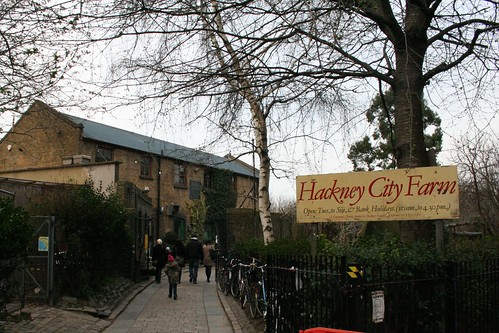 Like most city farms, this one is split in two, with a courtyard area for the smaller animals, and then pasture for the sheep and donkeys.

Going in through the main entrance, past the small but pleasant cafe and the soon to be opened farm shop, the courtyard has the look of a typical farmyard, and the birds are free range – so running around the place with a complete disregard for the humans roaming amongst their midst. 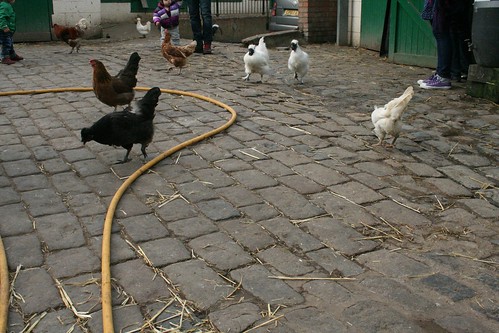 There is a small building to one side with some of the more fluffy pet type animals, but this farm has fairly few of them compared to other “petting zoos”.

Going towards the pasture area is the huge silage heap giving off a distinctive whiff and the pigs in their sty – and you have several fenced off areas for the cow, sheep, goats and donkey. Towards the rear outside the back of the farm – in the park area, squirrels can also be seen. 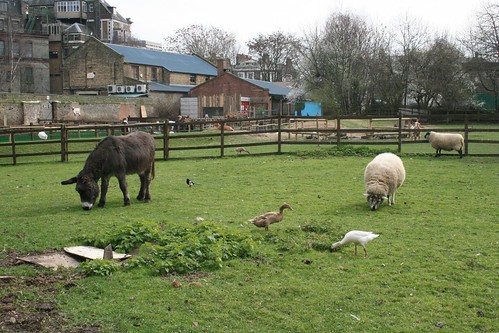 The lack of small fluffy animals may disappoint some, but it does make the farm feel more like a farm, and the large cobbled courtyard with the birds running around the place seemed to be delighting the children (and adults).

The huge silage heap to one side may look a mess, and it will smell – but that is what a farm looks and smells like – so while some city farms have hidden theirs away, I quite like it being here in the centre of the place.

As the birds are free-range some can be curious about humans, a goose decided that my pockets simply had to contain food and inspected them – much to the excitement of a parent who was trying to encourage her terrified child to approach the “chicken”. I am no expert, but I know the difference between goose and chicken. Then again, it is part of the remit of city farms to encourage people to learn more about the animals that may end up on our plates.

In general, although smaller than most, this is one of the better city farms I visited, and thanks in part to its high-profile location was also one of the busier farms I saw.

Closed every Monday, except Bank holidays.

Feeding time is at around 4pm

There is the Haggerston Park right next to the farm, with the remains of an old canal – since filled in and planted – to the rear. The Regents Canal itself is a short walk away (head up via Goldsmiths Row to see the Locks), as is the ever interesting Geffrye Museum.