Watt gets a dedicated display in the Science Museum?

Watt gets a dedicated display in the Science Museum!

I don’t know, what gets a dedicated display in the Science Museum?

I don’t know, what gets a display?

OK – silly and very obvious joke aside – the Science Museum has reopened up a display dedicated to the works of one James Watt, inventor, businessman and pioneer of the Industrial Revolution.

I wont go into detail about what Watt did, as it is recounted in many other places in more detail – but in summary, he invented a way of making steam engines vastly more efficient than they had been, then after some delays managed to mass produce them so that industry could undergo its famous Revolution, and later invented something most people overlook, and yet was his greatest commercial success – the early photocopier.

But, big machines that hiss and steam are always going to be far more interesting to people than a small box that copies letters – and understandably so – for I prefer them as well.

When James Watt finally went to the great workshop in the sky, the terrestrial workshop he had “pottered about in” during his retirement was locked up and rarely opened again until 1924, when the building was imperilled by demolition.

The building was torn down, but the workshop was preserved as a monument to the man – they even asked if the dust should be saved – and donated to the Science Museum where it has had a somewhat chequered history of being moved around the place, and always roped off from visitors.

As a fan of Victorian engineering, I am pleased to say that the museum has recanted its ways and moved the preserved room to the ground floor where it can sit in the grand hall next to examples of his great steam engines.

Also, though, rather than roping off the room like a National Trust house, they took out the big bench that took up so much of the space, then put a horseshoe shaped glass wall in, so you can walk into the room, and get close to the “junk”, and see it up close for the first time. 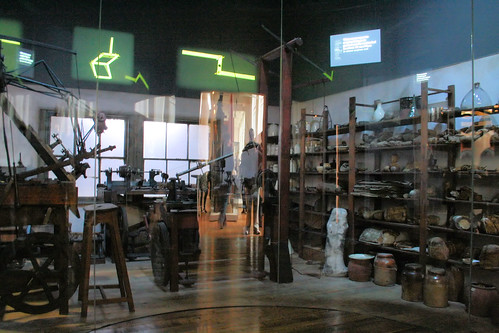 Watts Workshop - I don't think the video displays are original

I didn’t call it junk – that was the harlequin figure of Adam Hart-Davies who the museum dragged into give an opening speech this morning, and noted how similar the workroom looks to his own, being rammed full of what he affectionately called junk, that he is convinced will be vitally necessary some time in the future – and probably never will be. 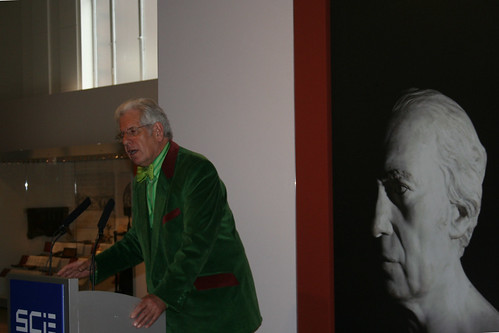 He got quite excited by a piece of piping, which it turns out is the key invention – the condenser – that made James Watt so rich. I guess it depends on how you think about these things, and some people might look at a pipe in bemusement, but as I got rather giddy at the sight of a foot long rusted iron tube once I can appreciate his excitement.

Apart from the restoration of his workroom, the display area includes the original Newcomen engine that Watt worked on and lead to his great breakthrough, as well as a beautiful model of a steam engine that was built for the Great Exhibition.

There are also a couple of glass cases with examples of his equipment and some of those early photocopiers I mentioned.

The timing of the exhibition is apt, as the Director noted that following the banking recession, there is renewed interest in “making things”, although the UK is still the sixth largest manufacturing economy in the world, so we aren’t that bad at it.

There will also be a redesigned £50 bank note coming out later this year, which will feature James Watt and his business partner, Matthew Boulton in the design. 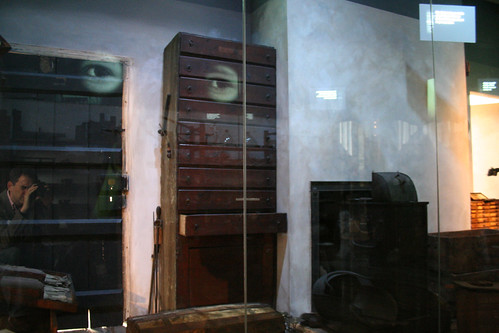 Reflections in the glass, or the ghostly James Watt keeping an eye on the place?

The Science Museum is free to visit, and the exhibition can be found on the ground floor, close to the huge red steam engine.

I wouldn’t go to the museum just for this display, as it isn’t big enough for a dedicated trip – unless you are a fanatic about the topic – but stepping inside the preserved workshop is something I think any fan of industrial history could find to be a deeply affecting experience. 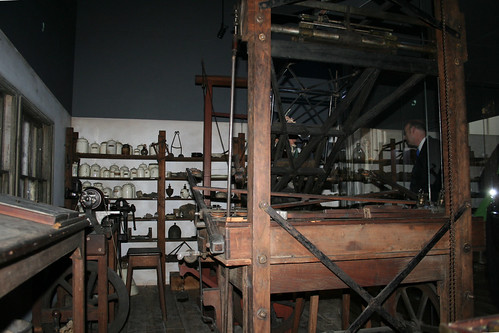 A view you wont get - I was able to stand behind the glass, just for a moment.

A few more photos I took are available here.

If you want to see some big James Watt supplied steam engines doing their hissing and steaming thing, this very weekend is you chance, as the Crossness Steam Pumping Station will have an occasional open day.

If you love big machines, then Crossness should be a mandatory visit at least once in your lifetime.