If you were in the vicinity of Old Street or Moorgate on Tuesday evening, you might have been slightly alarmed by the sight of a very low flying Chinook Helicopter coming into land, shortly followed by the sound of explosions and machine guns blazing away.

Not a terrorist incident, for this was the highlight of the 3rd annual open evening at the Honourable Artillery Company.

The HAC is is the oldest surviving regiment in the British Army, and the second most senior in the Territorial Army, and Tuesday night was a chance to persuade people to join the army, although the sales pitch was very relaxed and it doubles up as a fine night out for those less inclined to don camouflage clothing. 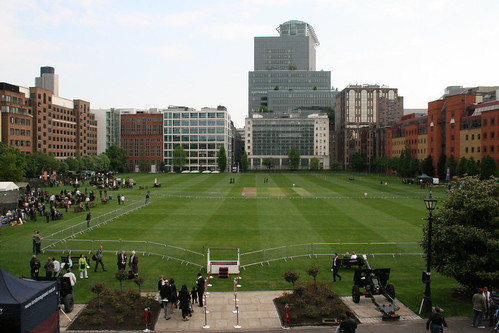 After a wander round the 18th century Armoury House, it was time to get a drink and have a closer look at a rather formidable bit of weaponry that was rotating around the place and pointing its missiles at people in a manner that reminded me rather too much of an ED-209 for comfort. 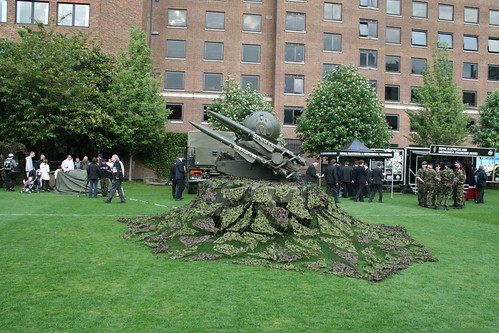 The Rapier 2000, for that it what it is, is a rather formidable bit of weaponry, and the four missiles mounted on it could travel from the grounds in the City to Heathrow Airport in five seconds. A talk given to us by an operator who had served in the Falklands left us in no doubt that if one of these beasts locks onto your aircraft, then basically, you’re dead.

Nice that the Brits own these machines, rather than the other side.

The team were also demonstrating the radio targeting – and if you were on a plane flying over London at about 6:30pm and felt a bit uncomfortable, then this might have been the reason. 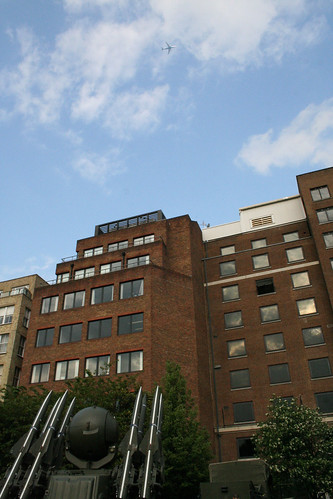 Like many military divisions, the HAC has its own Horse Artillery Regiment and a demonstration of horses drawing a gun carriage rolled over the initially pristine, and soon to be churned up cricket pitch. 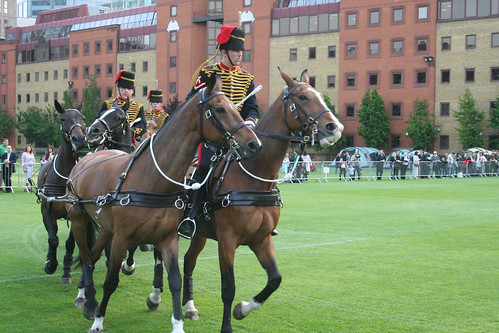 As the HAC is rather old, there was a demonstration of a civil war regiment. The HAC has the rare distinction of having fought on both the Royalist and Parliamentary sides of the English Civil War. 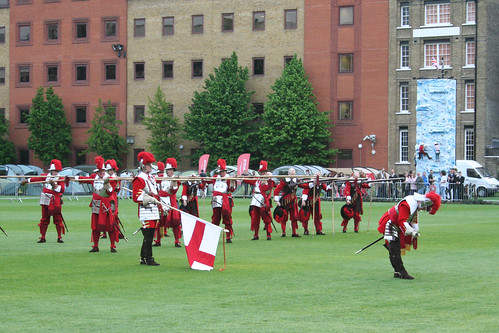 On the previous open evenings, there had been a large Chinook Helicopter on the grounds to peer inside. This evening was initially lacking said flying machine, but half way through the evening, the rear of the ground was cleared for a Chinook to come in low over Old Street and land in the grounds. In the process also sending a display tent flying away. 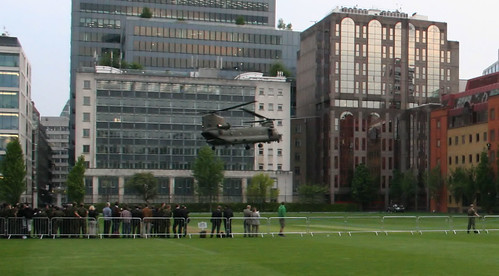 As on the previous few open evenings, the main event was a display of modern warfare. The scene was set as a battlefield in Afghanistan and a patrol had hit an IED planted by terrorists who were over to the far side of the ground.

An almighty fire-fight then took place, with mortar explosions, machine guns (although the chap closet to us seemed to have a gun jam) and eventually the successful killing of the attackers.

Unlike being in Afghanistan though, the success of the operation was met with with the slightly surreal sound of polite applause from an audience held back by metal railings. 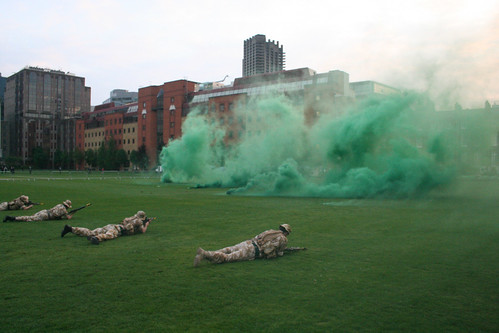 There was expected to be a display of parachutists as well, but as they were due to use the Chinook, and it was packed full of people wanting to have a closer look – it realistically seemed that the display wouldn’t happen, so it was time to think about heading off home.

For the 3rd year in a row, somehow they managed to get the weather just perfect for a summers evening out with good military displays.

Obviously the main reason for the event is to promote the Territorial Army, although the commentator did acknowledge that some of us might be there for a good night out, and just asked that we mention their regiment to friends.

With this blog post, I consider my debt paid.

2 Pings/Trackbacks for "Open Evening at the Honourable Artillery Company"