When there were icebergs in the River Thames

Published 3 May 2010 by By Ian Mansfield History

Although most readers will be familiar with the tales of the Frost Fairs, when the River Thames was completely frozen over, changes to the climate and river structures made such an event almost impossible in the 19th century – and the last fair took place in 1814.

However, the winter of 1854 was exceptionally cold, and ice flows were once again seen in the river.

The ice build up in the river was additionally noticeable as the previous freezes had taken place upstream of London Bridge, which acted as a substantial dam across the river and slowed the flow of water, enabling it to freeze over. The 1854 ice build up however took place downstream of the new London Bridge – something which was thought to be impossible.

The winter of 1854 was so bad that it seriously affected transport, both the new rail networks as well as conventional horse drawn carriages – and increasingly cargo ships arriving in Britain’s ports. Anyone affected by the recent air traffic chaos can possibly empathise with the substantial shut down of the UK transport network just over 150 years ago.

Below is an excerpt from the Illustrated London News of Jan 14th 1854, with an illustration showing the new London Bridge and the ice flows affecting the river.

SCENE IN THE POOL OF THE THAMES

The severity of the late weather has been felt more of less in everything connected in any way with commerce; but perhaps nothing in the mercantile world has suffered more from the effects of the inclement season than the shipping interest: frightful storms and wreaks, frozen rivers and detained shipping, have been unhappily the order of the day; and the commencement of 1854 will be remembered by all as unparalleled in the history of cold weather.

Our Sketch represents the river as it appeared on Wednesday week. For some days previously the ice had increased to such an extent as to render the navigation of the river above bridge not only difficult and dangerous, but so destructive to the bows and paddles of the steam-vessels plying between London, Chelsea, Woolwich, and other parts of the Thames, that it became necessary to discontinue running them; which, coupled with the scarcity of vehicles and doubtful travelling on land, occasioned an amount of public inconvenience unequalled on any previous occasion. 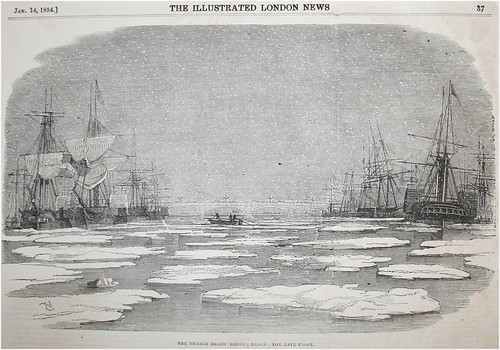 Under the circumstances before noticed the river assumed a most forlorn appearance, being, at high water, a field of moving ice, with occasionally a solitary coal-barge vainly endeavoring to make the shore through the mass of obstruction which surrounded it; and at the bottom tide it assumed a still more wretched aspect – immense blocks of ice and frozen mud (in some instances seven and eight feet thick) entirely filling the distances between high and low-water mark, and giving the banks of the river the appearance of a monster polar region.

Below bridge, the numerous steamers and other craft, which line either side of the Pool, became totally surrounded by the floating ice; and their moorings affording facilities for the stoppage of the blocks of ice, they quickly became completely surrounded: and at certain times of the tide so perfectly was the Thames covered, that, but for the strong current of the stream, the river must have again become stopped for some distance below London-bridge. Altogether, the dark gloomy sky and falling snow, the ice-covered and deserted river, the bitter cutting wind, and the absence of the busy scene which usually pervades the Pool of the river, causes Father Thames to assume an appearance which has rarely been witnessed.