Published 5 April 2010 by By Ian Mansfield Events and Tours

After a few years of restoration work, a Victorian steam pumping station was brought back into life late last year, and today was one of the periodic steaming days where the engine is powered up and surrounded by wreaths of steam.

The Markfield Beam Engine and Museum is housed in its original Grade II listed Engine House in the former sewage treatment works for Tottenham which now forms part of Markfield Park.

The principal exhibit is the Wood Bros. Beam Steam Pumping Engine of 1886.

The pumping station was built in this location to serve two functions – to pump away the sewerage from the growing population in Tottenham, and to pump away flood waters from the underground rivers which had a tendency to flood after heavy rains.

An initial treatment and pumping station was built on the site in the 1850s, but the 2nd building and the beam engine were installed in July 1888 to meet increasing demand. In 1901, the first set of pumps were removed and replaced with more powerful versions and the beam engine was relegated to stand-by use. 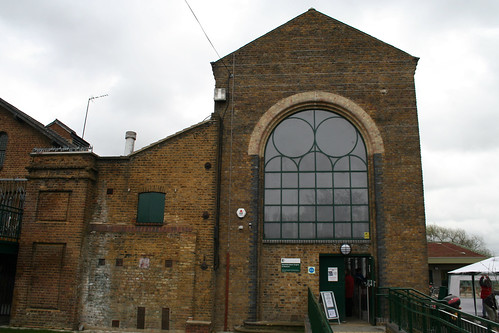 The whole facility was closed down in Feb 1964 when new sewerage plants were constructed elsewhere. The sludge tanks and surrounds were largely cleared and the site was listed in 1974, while the pumping station was boarded up.

A recent restoration effort, which is still ongoing, has restored the pumping machine to working order now with a new cafe and neat looking rose garden – while the former sludge tanks still retain their vandalised concrete appeal. 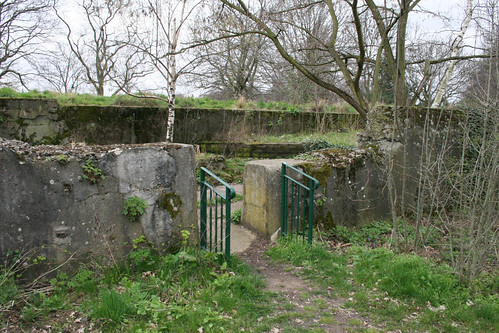 After wandering into a room that would have done a good impression of a Turkish steam bath and wandering around for a short while taking photos, a short alarm sounded and slowly the mighty engine rolled back into life. The flywheel built up speed while the beam above up nodded up and down ever faster and the steam that had enveloped us was swiftly sucked away by the machine. 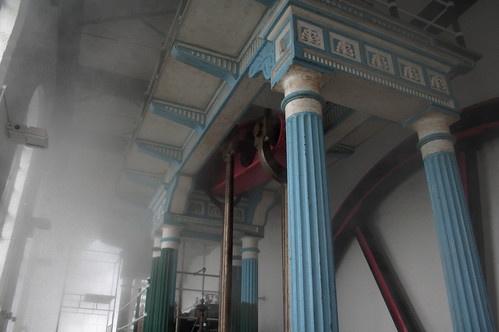 An ethereal atmosphere was replaced with cold hard Victorian efficiency. 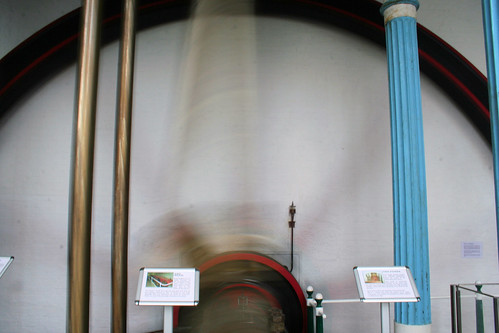 Apart from looking at the steam engine doing its thing, there isn’t a great deal else to see frankly, although a few signs do a good job of offering a history of the building. Unlike most industrial museums, there wasn’t the usual collection of leaflets and books to buy. Not even a commemorative mug to add to my collection.

That said, the relaunch of the museum is still a “work in progress” and as visits are free it would be churlish to complain too much. 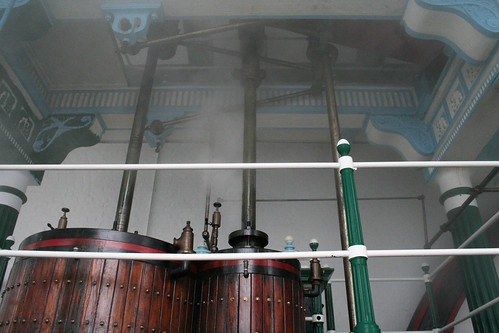 The venue has the advantage of being very easy to get to, as it is just a short walk from Seven Sister’s tube station. A vastly more impressive venue is the Crossness pumping station in SE London, but that is a) closed this year for restoration and b) a right pain to get to as it isn’t close to any transport links.

So, in the absence of Crossness, the Markfield pumping station makes for a very pleasant alternative choice and being sited right next to the Lea Valley gave me the option of a pleasant walk along the canals and marshlands down to the Olympic Park.

DiamondGeezer visited on its first day following restoration. TiredofLondon was not too tired to cycle past.