Map of London and its Toll Gates from 1857

Posted on 27 March 2010 by Posted in Miscellaneous

Another drawing from my collection of the Illustrated London News – this time of the then vexatious issue of toll-gates around the city that charged people a fee every time they passed though.

A committee had been created by Parliament to review road traffic in the city, and the newspaper argued not for reform of the toll-gates as was being contemplated, but their complete abolition.

As was common with writings of the time, the language is long-winded and rather florid, but in a style that I find quite delightful to read, in small doses. However, the concerns it raises about house prices and the sneering language about the poor and their entertainments did lead me to wonder if I was accidentally transcribing the Daily Mail rather than a 150 year old newspaper. 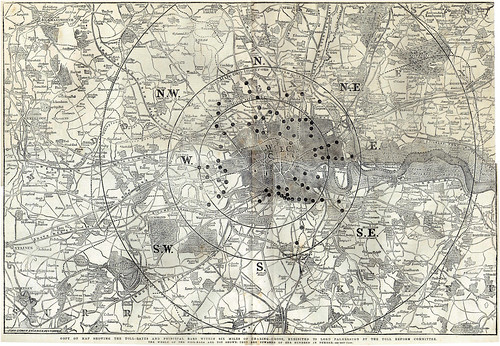 Whether in town or country the toll-bar is a barbarous nuisance. Money must, of course, be had for the construction and repair of highways; but is it necessary to collect it on that old system of “stand and deliver,” in which Claude Duval and Dick Turpin were such illustrious adepts? If we calculate the number of toll-bars, gates and pikes throughout England and Wales, we shall find that there cannot be fewer than eight or ten thousand people whose sole occupation is to obstruct the traffic and annoy the traveller. At fifty pikes to each of the fifty-two counties, and three persons to each pike – a calculation which we believe to be greatly under the mark – we should have an array of 8000 persons living out of the produce of the tolls, doing nothing for the maintenance of the roads, and good for nothing but to collect the moneys, which, if levies as a highway rate on the parish, might be collected along with the assessed taxes or the poor-rates, without rendering necessary the employment of an extra individual. If an army of collectors were employed to visit people at their dining or supper tables, and to levy the tax or duty on wine and spirits at their very moment of their consumption, the system would be scarcely a whit more barbarous – though, possibly, in a slight degree more costly and vexatious – than the toll-bar system now in operation throughout these civilised islands.

There is a cry to reform the toll-bar system. The cry should be to abolish it altogether. To reform it is impossible.

But, annoying as the obstruction of the toll-bar system is in the rural districts, it is infinitely worse within the boundaries of a town or a great city. So insufferable was the infliction felt to be, and injurious to the interests of trade, that within the limits of towns and cities toll-gates were long ago abolished by our forefathers. Who could tolerate a toll-bar in his way from Westminster Hall to the Bank, or from Charing-cross to St. Jame’s Place? We have but to fancy what uproar, what confusion, what annoyance, and what impediments would be created in our crowded thoroughfares by such a mode of raising money to repair the pavements, to understand at a glance all the multifarious objections that may be raised against the pike either as a national or as a local institution. Within the limits of the ancient city of London there are no toll-gates; and if, as it would have done under a proper system of government, the City Proper had grown into the Metropolis, and included Westminster, Lambeth, Finsbury, Marylebone, and the Tower Hamlets, which form the London de facto, though not the London de jure of our day, we may be quite certain that turnpikes and toll-ages would have been excluded from the great, as they are from the small, City, and from the modern and well as from the ancient, Metropolis.

In another portion of our Paper with be found the Statement which has been put forth by a Committee of members of Parliament and others, who seek the abolition of all toll gates and bars within a radius of six miles from Charing-cross, particularly on those roads north of the Thames which are now out of debt. To that statement, and to the map which illustrates the extent of the nuisance which the Committee desire to remove, we refer those who take an interest in the subject, and who have suffered from the evil complained of. They will there find the case clearly stated, and will be enabled to supply themselves with the arguments in favour of abolition, not only with the radius laid down by the Committee, but throughout the much more extensive circuit of the British Islands.

Like all other fiscal errors, the operation of the toll-bar system is infinitely more oppressive that it was intended to be. Its object is merely to collect a revenue for a specified purpose; but, like the Corn-laws, or the Excise-duty on soap, and many other imposts now happily repealed, it has interfered with the comfort, the health, the morality, and the trade of the people, and done mischief in a thousand ways which were never contemplated by its originators and upholders. It will tend to simplify the subject if we take a few of the most prominent objections seriatim :-

Firstly. The system is costly. Within a radius of four miles of Charing-cross, as stated by the Committee, there are eighty-seven gates and bars. The money that was expended in the erection of these gates and bars, that is expended in maintaining them, and that is paid in wages or salaries to the men and boys, amounting to more than two hundred, who are employed to look after the traffic, is sheer waste of resources. The collector of the assessed or any other parochial taxes might collect all the money, if the roads were made or kept in repair by a highway or a road rate, and all the money thus collected would be expended, as it should be, on the maintenance of the roads.

Secondly. The system is vexatious. Everybody feels this to be the case. The nuisance is so obvious and so palpable that it does not need to be insisted upon.

Thirdly. Under the false pretence of making none pay for the roads but those who ride or drive upon them, the system increases the price of food and other necessaries, not only to the dwellers within but to the dwellers without the toll-gates. The market gardener, driving his cart into town with his potatoes, his cabbages, or his fruit, adds the amount of the toll – and something more – to the price of his commodities; and the poor family – far too poor to ride, but not too poor to consume vegetables – pays the penalty. In like manner the dweller beyond the gate pays an increased price for all articles of town manufacture, especially for those which are too bulky to be sent out by a pedestrian messenger.

Fourthly. Wherever a toll-gate is erected within the limits of this fast-growing metropolis, it depreciates existing property, and prevents the extension of building. Those who remember Tyburn-gate, close

to the spot where the Marble Arch now stands, will recognise the extend of the evil. Respectable London may be said to have ended at the corner of the Edgware-road. Westward of that point – where now stands rows of palaces, and some of the finest squares, crescents, and streets in the world – were to be found either corn-fields or vegetable crofts, or buildings of the most inferior description; mean public-houses and squalid tea-gardens, the resort only of those who could walk to them, and never frequented by any one rich enough to ride his own horse or sit in his own vehicle. But, when the bar was removed, Tyburnia – the noblest and most magnificent suburb of London – speedily arose beyond its boundary. Many other examples might be cited, but this will suffice for our purpose. And, while such was the operation of the system outside of the toll-bar, its operation inside was equally injurious, but in another mode. Those persons who carried on trades which compelled them to employ horses and carts for their conveyance of materials naturally desired to avoid the constant nuisance and infliction of the turnpike. Hence stables, cowhouses, slaughter-houses, melting-houses, knackers’ yards, and other necessary abominations, instead of being removed with their filthy smells to a safe distance from the habitations of men, were established, where unfortunately they still remain, within the limits of the toll-bar. How much these tend to depreciate the property around them – how injuriously they affect the comfort and the health of the population – we need not more particularly point out. Almost everybody has felt and suffered from them; though few, perhaps, have considered that it was the ubiquitous “turnpike” that was the original cause of the mischief.

This list of grievances might be extended much further; and were it our present object to show the evils which turnpikes inflict upon the rural districts, and the vices and immoralities of which they are the nests, or the causes, we might exhaust our space long before we had exhausted the catalogue. When the metropolis shall have been freed from the infliction it will, perhaps, be time enough to take up the general question. The thoroughfares of London need many reforms. This immense city requires new arteries for its increasing traffic, new and larger main streets, and at least half a dozen new and toll-free bridges; but of no reform does it stand in more urgent need than the total abolition of Tolls. The matter is a practical one, and appeals to the common sense and the daily interests of a practical people. As such it will be considered. There may be difficulties in the way, but none that will very seriously try the wisdom of Parliament. “Down with the Turnpikes! and Palmerston for ever!” would be a homely cry, but it would be effective. But, as the Premier is sufficiently popular already, we recommend the subject to Sir George Grey, as more strictly within his department. It is, in reality, a matter of police; and the only wonder is that it escaped the notice of Sir Robert Peel when he abolished the ancient “Charleys.” London wants a Minister who in like manner shall abolish the “Pikemen.” There is likely to be no greater practical difficulty in the one case than there was in the other.