Published 24 September 2009 by By Ian Mansfield Events and Tours

Another of the pre-booked tours for Open House Weekend were the guided tours of the Naval Club in the rarefied airs of Mayfair. 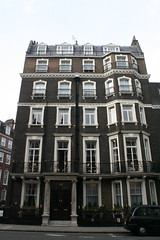 The building itself is a notable example of early 18th century grand houses, and indeed, one of the first occupants of the house was the Earl of Chatham, brother of then Prime Minister, William Pitt the Younger. However, the building spent the bulk of its private life as the home of the Raphael family before being requisitioned during World War 2.

The building was taken over by the Auxiliary Territorial Service, as the women’s arm of the British Army was then known, and after the war was brought by the current occupiers – the Naval Club.

After having my ID checked at the entrance and a short wait in the reception, we were given a double-act of a tour with one chap chatting about the building and its history and a lady talking about the fine paintings that adorn the walls.

Although the building is owned by the Club, there is a separate heritage association that looks after the fabric of the structure, and they were hosting the tours.

So, up the fine staircase to admire a picture of Prince Charles standing along side the Thames with the ship he commanded at the time, the coastal minehunter HMS Bronington in the background. The painting was notable, as the only the top half of the portrait is actually of Prince Charles. He was too busy to pose for the painting, so the bottom half is a painting of his bodyguard. Apparently, when the painting was unveiled, Lord Mountbatten was heard to mutter that it was a good likeness – of Bronington.

Gossip over, into what is now the restaurant but was originally the private dining room for the family. Here are paintings, there are original fitments, here is some history – and off up another flight of stairs to see more.

Unusually for a building of the time, although there was a grand staircase up to the first floor with a separate staircase for the servants, from the first floor upwards, both staff and family used the same staircase. Not out of a consideration for egalitarianism, but more likely due to the building being too narrow for both staircases to be fitted in.

A nice semi-private room presented itself – and turned out to originally have been the bedroom of the last Mr Raphael. Interestingly, the last surviving daughter of the original family celebrated her 100th birthday in that room only a few years ago, and apparently spent most of the party telling people where everything used to be laid out when she lived there.

A painting in that room had a nice tale to it as well, being of a grand party in the Painted Hall just down the road from me in Greenwich. On one of the first ever tours of the building, one of the visitors said her father had been at the party, wandered over to the painted, and was able to identify him in the crowd, sitting fortuitously close to the painter.

More rooms to see, more art to see and then down to the ground floor again.

We were now shown something significantly more sombre – a book listing the names of all the people who died during WW2 as part of the Naval Volunteer Reserves (RNVR).

Of the 6,200 names, 1,200 are from Canada, 350 from South Africa, 300 from New Zealand and 100 from Australia. In total, 14 countries of the then Empire are represented in the Roll, which is the only single record of all RNVR casualties in existence.

The whole building is in fact, now a dedicated War Memorial in recognition of the people who died in the war.

The tour finished off in the ground floor bar, which is finely decorated with wood panelling and an ornate ceiling – where we were invited to finish off the visit with a beer.

It’s not often you get to drink a pint inside a war memorial.