Published on 13 April 2009 by Posted in Events and Tours

An old leather chair, Morris Men and Easter eggs – that is what I saw this afternoon as the Blackheath Morris Men continued their 20-year long tradition of Easter Chair Heaving. It is thought to be an old tradition which was frowned upon by the Victorians – who seemed to frown upon almost everything – and slowly phased out or outright banned in some places.

The idea is that a chair (seemingly from the local pub) is decorated with spring flowers, and then a local lass sits in the chair whence it is lifted (or heaved) up by the Morris Men and turned around – being repeated three times. Kiss are offered to the men, and a decorated egg is offered to the lass. The Morris Men noted that is was probably an older tradition being a form of sacrifice to Eostre, an ancient Goddess of Spring who is closely associated with the original pagan Easter celebrations.

Some thoughts are that it represented the rising sun, others that it was representing the desire for strong growing crops in the fields. Later it was thought to be a “satire” on the resurrection of Jesus, which lead to the Victorian disapproval of the practice.

According to a book dated to 1864, the practice is recorded as far back as Edward I’s reign (1290) when seven of Queen Eleanor’s ladies invaded the king’s bedchamber, tossed him into a chair and didn’t set him down until he paid them a fine of fourteen pounds.

Considering that fourteen pounds would have represented a nobleman’s annual income at the time – it seems that this could be a bit of a money earner! 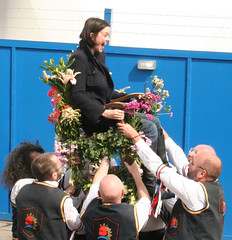 A writer in The Gentleman’s Magazine (1784) commented: “Lifting was originally designed to represent our Saviour’s resurrection. […] It is a rude, indecent, and dangerous diversion, practised chiefly by the lower class of people. Our magistrates constantly prohibit it by the bellman, but it subsists at the end of the town; and the women have of late years converted it into a money job. I believe it is chiefly confined to these Northern counties.”

Well, today it is definitely occurring in a Southern county, specifically the London Borough of Greenwich on Easter Monday. Indeed, the choice of Greenwich for the ceremony is apt, as the aforementioned Magazine also noted that “The custom of rolling down Greenwich-hill at Easter is a relique of old City manners, but peculiar to the metropolis.”

“a party of men go with a chair into every house to which they get admission, force every female to be seated in their vehicle, and lift them up three times, with loud huzzas. For this they claim the reward of a chaste salute, which those who are too coy to submit to may get exempted from by a fine of one shilling, and receive a written testimony, which secures them from a repetition of the ceremony for that day.”

Today, the Morris Men entertained a decent sized crowd beside the charred remains of the Cutty Sark with dances, interspersed with chair lifts. Unlike the claims above, no one was forced to sit in the chair, and the whole event was highly enjoyable to watch.

The last lift of the first session was the best as a Morris Dancer approached the lady standing beside me, who had only just arrived and not seen the previous events. Asked if she wanted to learn more and getting an agreement, she was shocked to be lead down to the chair, and hoisted aloft three times. 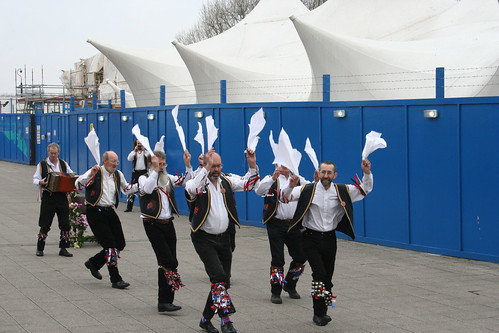