A few months ago, when collecting leaflets in the (now closed) tourist board centre in Greenwich, I purchased a book of Docklands history, published by The Island History Trust – mainly as it had two maps which really caught my attention.

I’ll mention the second on another day, but the inside cover had a map of the fortifications along the Thames in the time of the Spanish Armada – coincidentally exactly 420 years ago.

The bit which really caught my eye though were two piers across the river at Blackwall – which very nearly sealed off the river, and would seem to have had cannons mounted on the very ends of the piers. Any ship which had managed to get past the Tilbury barrage would then face going up river right into the face of cannon fire. 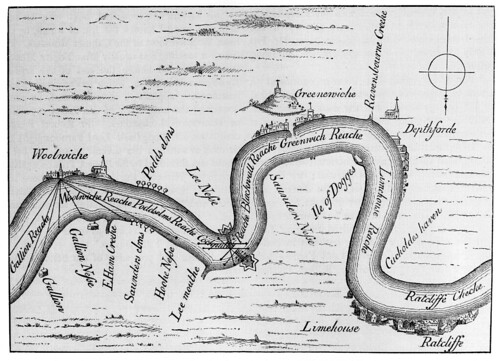 A larger version is available here
(notice how North and South are reversed?)

There is also this larger scale map – found here

The ever excellent Survey of London mentions that there is no evidence that two large star shaped forts which were placed at the landside of each pier were actually built. It notes that there were claims that the piles for the piers were discovered later on, but seems dubious about the reliability of the source.

Amazingly, there were plans drawn up about a decade later to construct a full bridge across the river at Blackwall – which I suspect may have been a plan to link up the two piers (if they actually existed) with some form of drawbridge (to allow ships to pass though), but nothing came of that – alas.

It’s a fascinating little snippet, made doubly so for being related to such an important era in English history – but I am also quite amazed at the size of the battlements built to protect London. It is worth noting that during WW2, a series of battlements were also built in the Thames – this time far out in the estuary and anti-aircraft guns mounted on top of them to try and shoot down German planes which tended to use the Thames as a convenient route to London.

You can still see these “modern” defenses by taking a boat ride out to them with Bayblast (diamondgeezer took a trip recently, and I went out a couple of years ago)